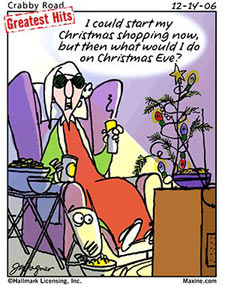 Take my friend #1 New York Times bestselling author Susan Mallery. At the end of September, I know — without checking with her — I know that she’s done with her shopping. She’s also done with her wrapping, her mailing and her cards are written, addressed and stamped. She used to mail the cards before Thanksgiving but got such a hostile response from her less organized friends she holds onto them until closer to Christmas.

Then there’s me. Around October, I always make the same resolution — I’m going to get my Christmas shopping early. So I hit the internet and start ordering stuff. You know. Stuff. Stuff for the kids, stuff for The Husband, stuff for my friends, stuff for my father-in-law who, God help me, is the hardest man in the world to buy for because he doesn’t want anything and if he does, he buys it for himself. (Yes, somehow buying stuff for the kids and the relatives is my job. Would someone explain how that happened?) I usually get the stuff that needs to be mailed packed up and shipped by December 10. You know — soon enough that I don’t have to pay for express shipping but not soon enough to avoid the lines at the post office. Around December 15, I haul all the home stuff out of the closet and put it in piles according to who gets what, figure out what everyone has and how much is left to be bought, and in a frenzy order/shop for the rest. Then in a grim tone I announce to The Husband since I did all the work of figuring out the gifts and getting them, he can wrap them. This has the effect of having him help. We put them under the tree. My family opens gifts on Christmas morning. The gifts are often wrapped for less than twenty-four hours.

October elicits no response from The Husband. Christmas? Why worry about Christmas in October? Or November? Or even December … until around the twenty-first when something (possibly the millions of commercials and print ads) calls to his attention that he has three days to get me (remember, I’m his sole responsibility) a gift. At this point he becomes a martyr. With many heavy sighs, he trudges down to the mall. He shops for a couple of hours. He comes back in a fury and announces that WHATEVER IT IS I WANT, THEY DON’T MAKE IT ANYMORE.

He hits the internet. He orders something (not what I want, because they don’t make it anymore) and uses overnight shipping to get it, thus making sure the shipping costs more than the gift. (In the interest of fair play, he demands that I tell you he does the Christmas cards and writes the Christmas letter. He does, and usually early in December, too. Bless him!)

So there we have it, the three categories, Weird Early People, Normal People and Men. Which group do you belong to?

I’d love to have you as a newsletter friend. Join now!