Adam Ramsdell saw something long and black rolled in on the swells, a long parcel of…plastic? It disappeared under the first line of breakers, then appeared again, battered by an insistent ocean. As the bundle moved, it undulated, and if he didn’t handle this, a seabird would ingest it and die, a fish would nibble at it and turn into a stinking corpse on the beach, a curious child would find it and…

He shuddered. At one time, it had been his job to figure out every possible consequence for any given situation, and he knew only too well what could happen in this worst case scenario. He made his way off the rocks, down to the sand. The ocean rocked the plastic back and forth, back and forth, pulling the parcel back out into the deep, then shoving it farther onto shore to the spot where the foam gathered and the waves grew shallow. As he walked, a wave rolled the bundle lengthwise—and a feminine arm flopped out.

With the sun on her icy, colorless face, his feeble, unrecognized hope faded. She was dead. He unwrapped her neck to press his fingers to the carotid artery, and saw them—the marks of a man’s fingers ringing her throat.

She’d been dead before she went in the water. A young woman. A pretty woman. A violent crime… Adam knew he would feel no heartbeat. And he did not.

He couldn’t leave her down here for the seabirds to feed on and the ocean to retrieve. He had to get the body up to the road, onto his ATV and up to the village. From there, he could call the authorities. He looked up the cliff. What a helluva climb. Yet he wasn’t a man to shirk his duty. Bending at the knees, he grasped the body around the waist, threw it over his shoulder and stood.

The woman explosively emptied her stomach down his back, gave a gasp, another, another, and when he flipped her back onto the sand, she opened her eyes, looked at him—and screamed. She screamed as if all the screams in the world had been pent up inside her, as if she had given terror and horror a voice.

She rolled onto her hands and knees, coughed up more seawater, took a long breath as if preparing to scream again…and slowly let it out. She turned her head. The braid of her dark drenched hair hung over her shoulder.

“I don’t know.” Her unusually colored eyes were wide with confusion and terror.

He sat back on his heels. Adam Ramsdell had found his first lost soul. 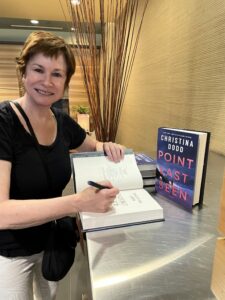 Autographed copies are available from The Poisoned Pen and Page 2 Books. (206) 248-7248email: books@page2books.com

If you’re not already a newsletter friend, what are you waiting for? I’d love to welcome you. You’ll enjoy book updates, book sales, surveys, and humorous insights to the writing life. Join!