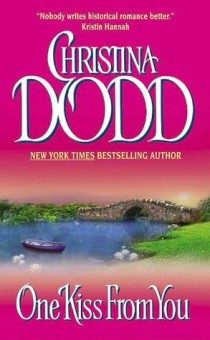 You can order ONE KISS FROM YOU: Switching Places #2, at these online retailers:

ONE KISS FROM YOU: Switching Places #2

Eleanor de Lacy must have been mad to agree to exchange identities with her stronger-willed cousin. Remington Knight is strong, ruthless and determined to marry the duchess of Magnus…and he believes that is Eleanor! Worse, Eleanor is charmed by Remington ‘s attempts to seduce her. But when he learns of Eleanor’s deception, this daring rogue will wreak havoc…upon her reputation and her heart.

Remington had expected a haughty, unbending aristocrat who would ensure his entrance into good society. But this “duchess” is a most pleasant surprise — modest, warm-hearted, endearingly awkward, and a delight to the eye. In short, she is exactly the sort of bride Remington could fall passionately in love with. If only he still had a heart… Read ONE KISS FROM YOU, the second in the Switching Places series, from Christina Dodd, the author you love.