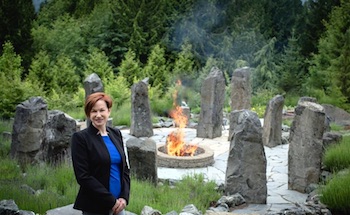 Your eccentric author and our stone circle

When our daughters were teenagers, we decided it was time to take a trip to merry old England, the setting of so many of my historical romances. While we were there, we stopped by the windswept hills that boast one of the world’s most recognizable landmarks: Stonehenge. Wow, was it cold that day (we lived in Houston at the time so we were complete sissies), but we trekked up the hill to stand amid the ancient stones.

Years later, I was looking out my bedroom window in Western Washington (Western Washington, not surprisingly, is the setting for the quaint and deadly town of Virtue Falls), thinking that our giant side yard would be a perfect place for Stonehenge – dark, chilly, and windswept for most of the year. So I said to The Husband (he-who-does-all-manner-of-amazing-building-projects), “It would be cool to have a miniature stone circle we could see from the bedroom.” He agreed and got to work designing our very own Stonehenge.

Being the silly woman I am, I was expecting something knee-high. Not so much. The Husband believes quite firmly that anything involving gigantic machines is officially labeled fun, so I was in for some serious stone-moving. Here he’s directing the excavator to set the stones … the heaviest weighs 5300 lbs. After they dropped the first stone and the earth shook, I spent the rest of the day pacing up and down and wringing my hands. 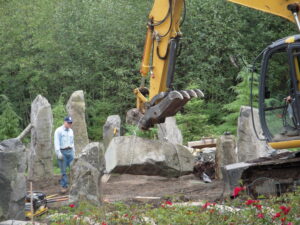 The Husband, the excavator and the stones

But finally our mini-Stonehenge was finished, and we were prepared for the Summer Solstice! Now, as you know, Druids & some ::cough:: very unique people gather at Stonehenge in England to see the sun rise on the longest day of the year (around June 21st). So, The Husband readied the fire pit, gathered herbs, and prepared for our own sunrise solstice celebration. 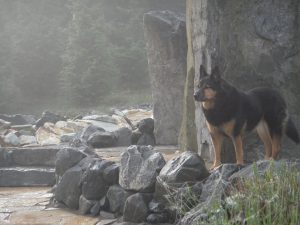 Our Lizzie Dog in the Stone Circle

We stumbled out of bed at 4:45am for the 5:07 sunrise. We lit the fire in the middle of the stone circle, grabbed the deck chairs and the dogs, and went out into the pre-dawn air. The moon was still up and to the east, a cloud bank hovered on the horizon. The Husband got the fire going — it’s like with the rocks, bigger is better. (See the video.)

At 5:07am, the official sunrise, we tossed our herbs into the flames. We had assembled rosemary for remembrance, lavender for luck, sage for cleansing and cilantro for my friend Joyce who critiqued my books and was, at the time, undergoing chemo. Unfortunately, we have a lot of trees and mountains between us and the sun, so we had to wait a while to see if The Husband had calibrated the location of the two largest stones correctly (the sun was supposed to rise between them). We waited on pins and needles (though I suppose we needn’t have since the stones were set in concrete, so there was no moving them now), but the moment of truth came…and the sun came through the trees exactly between the key stones! 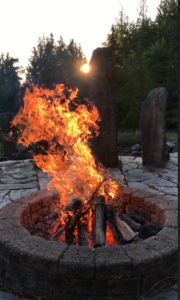 I know you. You’re thinking one of two things. “Cool!” or, “Man, these people are weird.” The Husband says we are not weird. We’re eccentric. That’s our story and we’re sticking to it.

You can imagine the excitement when I discovered POINT LAST SEEN was going to be released on June 21, 2022, on the exact
date of the summer solstice! Yeah, well…here’s the story about that. 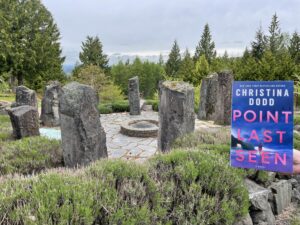 Read about POINT LAST SEEN and the Summer Solstice!

Read more about the stone circle and what we do with this massive monument the rest of the year here.

Watch videos of fire in the stone circle’s fire pit, peaceful snowfall in our back yard, bees buzzing in our lavender, the visiting bobcat, the visiting owl…we live in the middle of the forest, and it’s amazing. Enjoy! 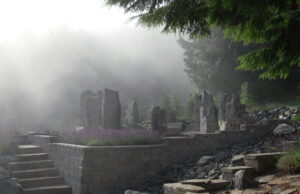