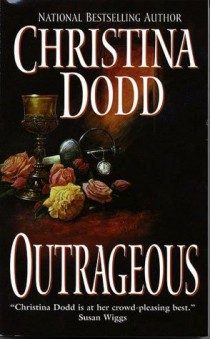 You can order OUTRAGEOUS, at these online retailers:

A woman banished
Griffith, battle-seasoned warrior and the king’s most trusted emissary, expected to find a shallow, vain, frivolous woman at Wenthaven Castle. After all, as lady-in-waiting to the queen, lovely Lady Marian had been in a position of privilege, yet she had been banished from the court. And the rumors were that she had given birth to an illegitimate child.

An outrageous offer
When he arrived, Griffith found Lady Marian to be strong, intelligent and fiercely protective of the young baby in her custody…. and suspicious of him. If he were smart, the knight would simply deliver the message with which he had been entrusted. Instead, he lingers to delve into the mystery that is Marian, to discover what she so desperately fears—and why he so passionately wants her.

Most of my early books were set in the medieval era, a robust time when a bold, intelligent woman could get ahead in the world — and a woman who had no family to care for her could be put in a perilous position. OUTRAGEOUS aptly describes Lady Marian Wenthaven, a woman who performs her duty without whining or asking for pity, and finds herself an outcast because of it. But the arrival of the queen’s emissary, Griffith ap Powel, changes her life …

The clash of swords echoed through the long gallery of the fashionable castle keep, and Griffith ap Powel grimaced in disgust. "Dueling?" he inquired of his host. "You’ve brought me here to watch dueling?"

With his receding silver hairline, his aristocratic features, and a pack of yipping, auburn-coated spaniels yipping at his heels, the earl of Wenthaven was the model of urbane hospitality. "I am but trying to fulfill your request."

Shrieks of laughter and sham alarm assaulted Griffith as they shouldered their way through the outer ring of spectators. "There is no respect for a warrior in this country," Griffith growled. "In Wales, we fight in battle, to the death, with a good two-handed sword in our grip and an enemy before us. There is none of the so-called sport of dueling."

With one elegant gesture, Wenthaven dismissed Wales and its customs. "‘Tis a French practice, actually, but many youths abide here with me, and they fight on any pretext. They fight for the pure joy of fighting, so I encourage dueling. The swords are light and have dulled edges, and their vigorous spirits are dampened with judicious training. Moreover, if you wish to speak to Lady Marian, the former lady-in-waiting for our uncrowned queen, then you must come here."

Already aflame with a sense of misuse and a total contempt for his mission, Griffith snapped, "Does this Lady Marian enjoy watching young fools slice at each other?"

Wenthaven mocked Griffith with a dimpled smile. "If you would but look closely, you would see the part which Lady Marian plays."

Griffith had the height to give him a clear view over the circle of cheering spectators. Two figures danced on the polished stone floor, dulled dueling swords in hand. The skill of both was extraordinary, a testament to healthy bodies and youthful spirits.

But -- "One of the duelists is a woman." Griffith rubbed his eyes. "That woman is using a sword."

Like a flame above a slim white candle, her vivid hair struggled from under her coif and slithered down her back. Her eyes snapped with green sparks; her teeth sparkled white in a challenging smile. The creamy silk of her skirt hung over her arm, giving Griffith a glimpse of muscular, silk-clad ankles and calves. Her light step distracted Griffith from the sword she balanced in the other hand.

Sweet Saint Dewi, but she was tall. She looked the handsome hulk of a man right in the eye, and she did it boldly.

Singing a tune off-key, she ridiculed her opponent with the flash of her blade, with her amusement, with her height.

Both his hands were free to fight, and he displayed a skill and an agility that would tempt most men to back away. But he panted in great, billowing gasps, sweat dripped into his eyes, and he slashed with an aggression out of place for a friendly bout.

Her opponent was losing.

At Griffith's side, Wenthaven said, "She's good, isn't she?"

"I taught her all she knows."

Unable to tear his gaze from the too-tall, too-bold, too-tall beauty, Griffith said, "You’re mad. Why would a man teach a woman to duel with swords?"

Wenthaven chuckled. "A woman like her must have a way to defend herself from … shall we say … unwanted attentions."

The curved swords clashed, screeching as the blades skidded in a shower of blue sparks. "A woman like her?"