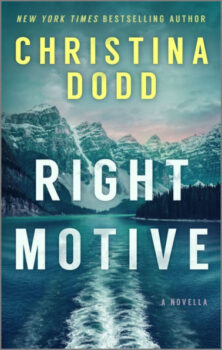 Right Motive is an all-new stand-alone novella from New York Times bestselling author Christina Dodd. Set in the same world as her novel Wrong Alibi, in small-town Rockin, Alaska, this story is packed with her trademark mystery, unforgettable characters, plot twists and humor.

Police Chief Rodolphe Dumas looked up as Officer Gabriella Donatti put down her phone, stood up from her desk, and turned in a circle, arms extended in despair. “April Fools Day has come and gone,” she called to the ceiling. “Is it Halloween already?”

He noted, also, that their dispatcher, Stu Kippie, hung his head out of his office, watching and grinning.

Dumas liked Donatti; she was tough, intelligent, quick-witted and, in his never to be spoken opinion, cuter than a speckled pup under the porch.

A long-legged speckled pup; the girl was curvaceous and darned near six feet tall, which made her six inches taller than him, and that was if he lied about his height. If he was twenty years younger — okay, thirty years younger — he would woo her. He might have a kink in his neck, but the pain would be worth it.

Plus she was a gosh darned good officer, the first female hired in the Rockin police department in years upon years, and if the call had been serious, she would have been on it like stink on a skunk.

This sounded like the usual prank call, and he asked affectionately, “What’s up, chére?”

Deadpan as all heck, she said “Bigfoot has been sighted west of here, near Denali National Park.”

Grins bloomed across the length and breadth of the office.

Dumas had been in law enforcement for over thirty-three years, first in Louisiana — he was Cajun to his bones — and now in Rockin, Alaska. “Of course he has. Did whoever called this in get a photograph?”

“Not just a photograph.” Donatti paused dramatically, then said, “A video. Which proves without a doubt that Bigfoot is in the area because no one in the history of Photoshop has ever tampered with a video.”

“That’s rhetorical, right?” Office Howland leaned back in his desk chair. “Because you’re the newest, which automatically means you’re holding the short straw.”

“That’s easily solved.” She turned to Dumas. “When are you going to hire someone else?”

“Soon.” His gaze skittered around at his officers, never resting on any too long. But it didn’t require much to make two avoid his gaze.

He still had a few officers hanging on from the previous police chief’s administration. He’d had no reason to replace them — but only because he hadn’t caught them in the act of…whatever unlawful activity they were involved in. “Officer Donatti, your partner’s out today.”

“Jim Kittilia. Yes, he’s out sick.” She didn’t use air quotes, but Dumas saw them anyway.

He hoisted himself out of his chair and adjusted his belt. “I’ll ride along with Officer Donatti. I have not yet met Bigfoot. That must be a rite of passage.”

A ripple of laughter around the room.

“I wouldn’t hold my breath on that.” Blake Schofield had been born here, raised here, had been an officer here for all his twenty years in law enforcement, and was the self-appointed perveyor of local knowledge. “Especially not in broad daylight. For the most part, he’s a nocternal creature.”

“Ah, well. It’s a beautiful day out, and Donatti might need backup while dealing with this wild creature.”

Another ripple of laughter.

As Dumas walked out, he was aware the sentiment in the department was oh-so-slowly shifting his way. When he first arrived as newly appointed police chief of the municipality of Rockin, he was all smiles and affability, shaking hands, laying on the thick Cajun accent, convincing them he was the chief they imagined — maybe corrupt, possibly lazy, certainly none too bright.

When he told them he was there to kick butt and take names, and he’d forgotten his pencil, they smirked. Then he called three of them in, right in a row, and fired them, boom, boom, boom.

They were the easy ones: the officers who got a call and always took the long way around, the ones who arrested women for jaywalking and ignored the guys drag racing down Main Street, and Officer West who beat up his girlfriend, had a restraining order slapped on him—and ignored it.

Dumas did not kick dogs or hit women. His job was to protect and serve, and he took that duty seriously. Ignoring the restraining order was unlawful, and when he fired West, he said so.

West called Dumas, “Dumbass,” — because Dumas had never heard that joke before — and slammed down his sidearm, the keys to his patrol car and a few other essentials, and stormed out.

Dumas took five minutes to don his bulletproof vest and pick a team to provide backup in case of trouble. The cops headed to the girlfriend’s place of employment, and got there in time find West in full riot gear holding the whole diner hostage with a shotgun while his girlfriend begged him to shoot her and spare the kids.

Dumas drew his sidearm and ordered West to stand down.

Dumas nailed him in the chest right over the heart. Didn’t kill him, sadly; West wore his own bulletproof armor. But the bullet knocked him backward and another fast shot removed his elbow and with it, the shotgun, and saved the good people in the diner from harm.

Unfortunately, while more officers arrived to handle the situation, Dumas enjoyed a hospital visit to remove stray buckshot from his thigh and forehead. The doctors want to keep him for observation. He brushed away their advice and the pain relievers and returned to work.

He limped in to find his backups giving full accounting of the episode as the rest of his officers drank coffee and buzzed with excitement. One look at the bandage on his face and the bruise that spread out around it, and they hopped fast to their desks and out to their patrol cars.

With not an ounce of his former affability, he said, “Did I neglect to mention that I won the Southern Regional Small Arms Championship?”

A mutter, “Hadn’t heard that.”

And another, “Congratulations, Chief.”

He limped toward his office, groaning and making much of his injuries. They might think he was old, but all of them knew shot from a gun fired ten feet away could have been deadly. In the doorway, he turned. “Also the World Championship, but I don’t like to brag. Gentlemen, the good ol’ boys club of Rockin law enforcement is officially at an end. You all comprehend that?”

Most of them met his eyes and nodded.