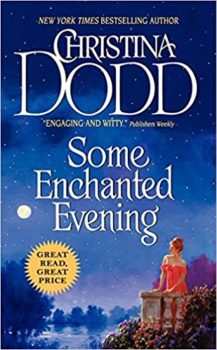 Once upon a time . . . in a kingdom high in the Pyrenees, three young princesses were forced to flee the chaos in their land—vanishing without a trace and lost to their people . . . until the day a courageous prince can bring the princesses home.

One of Scotland’s most dangerous men, Robert MacKenzie is dazzled by the enchanting beauty who rides into the town he is sworn to defend. Clarice stirs emotions within him that Robert buried deeply years before.

Torn between her need to protect her secrets and her aching desire for the dark, tormented earl of Hepburn, Clarice is pulled into Robert’s glamorous world . . . and into his perilous plan for justice and revenge. With the winds of treachery swirling around them, this runaway princess must draw Robert’s heart from the shadows and make him believe in happily-ever-after.

After writing thirty books I realized that most of my stories were about a person searching for a family, a home — and of course, love. The Lost Princesses is the epitome of that theme — three royal princesses lost in England with no chance to return to their privileged lives.

SOME ENCHANTED EVENING, the first of the series, chronicles Princess Clarice and her struggle to support herself and her younger sister by selling creams to enhance beauty. When a warlike Scottish lord, Robert MacKenzie, decides to use her and her skills for his own purposes, she finds herself trapped by blackmail and fascination.

Once upon a time, high in the Pyrenees Mountains, there were two kingdoms, happy and prosperous. In one kingdom, Richarte, a son was born and declared the crown prince.

In the other kingdom, three daughters, Sorcha, Clarice and Amy were raised in royal splendor by their loving father, the king, and their grandmother, a martinet who demanded they perform their royal duties at all times.

Then revolution swept Europe and swept the two kingdoms.

The three princesses of Beaumontagne were sent to the safety of England. Their father, the king, was killed. After six years of warfare, their grandmother wrested control back from the revolutionaries. She sent her most trusted emissary for her granddaughters, but Godfrey was not loyal. He couldn’t bear to kill the girls, so he told them assassins hunted them and urged them to flee. In fear for their lives, the princesses hid themselves.

Then Godfrey reported to the old queen they had disappeared. The old queen sent messengers far and wide, but alas, no one could find a trace of Sorcha, Clarice or Amy.

A cruel usurper threw the prince of Richarte into the deepest, darkest dungeon and there, for eight years, the prince languished. At long last he managed to escape and make his way to Beaumontagne. There he struck a deal with the old queen.

When he had found all three of the Lost Princesses, he could choose one as his bride. When the wedding had been performed then, and only then, would he be allowed to take the armies of Beaumontagne to overthrow the cruel usurper and assume the throne once more.

So like many good schemes, the plan to rescue the Lost Princesses went awry …

The valley was his, the village was his, and the woman rode into the town square of Freya Crags as if she owned it.

Robert MacKenzie, earl of Hepburn, frowned at the stranger who cantered over the stone bridge and into the bustling crowd. It was market day, and booths of brown canvas were set up along the perimeter of the town square. The place rang with the sound of a hundred voices calling out their wares, but the stranger dominated the crowd, towering above them on a fractious two-year-old colt. The chestnut stepped high, as if proud to carry her, and the quality of the horse alone would have turned heads.

Robert glanced around at the small circle of old men gathered in the sunshine in front of the alehouse. Their wrinkled mouths sagged open as they gawked, the table and checkerboard before them forgotten. Around them the sounds of shoppers and merchants haggling turned into a buzz of speculation as every eye turned to view the stranger.

Her riding costume swathed her from neck to toe with black wool, preserving the illusion of propriety, yet outlining every curve of her trim figure. Her black hat was tall, with a broad brim, and black veiling floated behind. The red trim on her sleeves matched the red scarf at her neck, and those small bits of vivid color shocked and pleasured the eye. Her bosom was generous, her waist narrow, her black boots shiny, and her face …

Robert couldn’t look away. If she’d been born in the Renaissance, painters would have flocked to her door, begging that she pose for them. They would have painted her as an angel, for her wavy, golden hair glowed with a light of its own, giving her a nimbus like a halo. Copper glints in the curls seemed to possess a power to warm the hands, and Robert's fingers itched to sink into the waves and discover the heat and the texture. Her softly rounded cheeks and large amber eyes under darkened brows made a man think of heaven, yet the stubborn set of her chin saved her face from a cloying sweetness. Her nose was slight, her chin too broad to be truly attractive, but her lips were wide, lush, and red. Too red. She rouged them, he was sure of it. She looked like an Englishwoman of good quality — except, of course, no woman of good quality ever rouged her lips, and certainly never traveled alone.

She smiled, giving him a glimpse of straight, white teeth — and that mouth he planned to explore.

Robert straightened away from the wall of the alehouse. Where in blazes had that thought come from?

Hamish MacQueen’s one arm gone in an long-ago accident in His Majesty’s Navy. "Who do ye suppose she is?"

A good question, and Robert intended to get an answer.

"I dunna know, but I’d like t’ part her beard," Gilbert Wilson, his sly wit taking a wicked turn.

"I’d like t’ give her a live sausage fer supper." Tomas MacTavish slapped his skinny knee and cackled.

Henry MacCulloch joined in the pastime. "I’d like t’ play dog in the doublet wi’ her."

The old men cackled, content to sit in the sun in front of the alehouse, comment on the doings of the town, and play checkers — or they had been, until she rode into town.

Robert's gaze narrowed on the female. He was smart enough, and in his travels had seen enough, to recognize trouble when he saw it. On the surface he appeared to be mildly interested in the doings in the square, but his every sense was alert for a trick. Indeed, he anticipated a trick. After all, the world was not so secure a place as anyone in this small village imagined. The world was full of liars and cheats, murderers and worse. It was men like him, like Robert, who kept this place safe, and through his vigilance, he would continue to do so.

The exotic stranger circled the booths, giving everyone a chance to see her. Robert’s people were suspicious or inquisitive, but she beamed them a friendly smile as if she had not a speck of intelligence. She rode right to the middle of the square, where a statue honored Robert's ancestor, Uilleam Hepburn. There she slid off her horse. She lifted her saddlebags onto the platform which raised her above the multitude. The curious throng gathered. The female touched the silver cross around her neck, then took a breath and flung her arms wide. "Good people of Freya Crags, allow me to introduce myself. I am a princess in exile!"

The female beside the statue lifted her chin and smiled blindingly. "I am Princess Clarice of the lost kingdom!"

Hamish tucked the end of his shirt over the stump of his arm. "Eh, a princess! We’ve got guid taste."

Robert glanced at them, distracted from the pageant in the center of the square by their surging excitement.

Then the larcenous wench of a princess made another outrageous claim. "I’ve come to bring youth, beauty and joy to your lives!"

His head snapped back toward the royal minx. The words of his aide, Waldemar, came back to him so clearly Waldemar might almost have been standing beside him, speaking in his ear. Lor love ye, Cap’n, there’s ne’er a person what falls into yer life without a purpose. Ye just ‘ave t’ discover wat that is, and use ‘em like the instruments they are, and always ye’ll get yer way, see if ye don’t.

And with the lightning quick planning he had developed in the army, Robert realized why this female had arrived in his town, and what purpose she would serve. Yes, he would use her like the instrument she was. She would do as he instructed because she had no choice, and yes, he would get his way.

Fortified with resolve, Robert made his way through the crowd toward the statue, and the princess.

At long last, justice would be served.