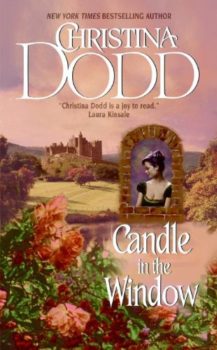 Candle in the Window

Christina Dodd’s illustrious writing career began with this book, CANDLE IN THE WINDOW,
winner of the coveted Golden Heart and RITA Awards!

Lady Saura of Roget lived a lonely life of servitude, her fortune controlled by her unscrupulous stepfather, until she was summoned to the castle if Sir William of Miraval. The magnificent knight had once sworn to live or perish by the sword. But that was before his world was engulfed in agonizing darkness.

They came together in a blaze of passion; the raven-haired maiden and the golden warrior who laid siege to her heart. Yet danger awaited them just beyond the castle walls. Saura and William soon found themselves fighting for their lives, even as they surrender to an all-consuming love. 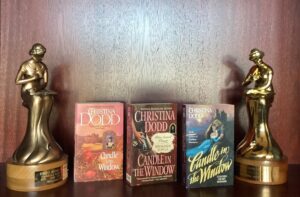 A mighty warrior, Sir William, was blinded in battle, and his father, Lord Peter, found him someone who could force him out of his depression and teach him how to function in the world. What William doesn’t know is that his teacher is young, beautiful—and also blind. Click “excerpt” to read.

CANDLE IN THE WINDOW was the first book I ever published. More than that, at every autographing I hear, "My favorite book of all the books you’ve written is CANDLE IN THE WINDOW." Mind you, I have now published fifty novels, and I can get a little testy about being told my first book was my best, but CANDLE did win Romance Writers of America’s Golden Heart Award (when I was unpublished) and the RITA award (after it was published) and almost every award in the business. And I love the story myself. After all, that’s why I wrote it.

A mighty warrior, Sir William, was blinded in battle, and his father, Lord Peter, found him someone who could force him out of his depression and teach him how to function in the world. What William doesn’t know is that his teacher is young, beautiful … and also blind.

That Woman moved with speed and confidence, William thought sourly as he poured water over his chest. A contingent of female vassals had escorted him to the solar and stripped him while the men wrestled the huge tub in front of the fire. Buckets of water had been set to heat and kettles of water hung over the fire to boil. In no time he had dipped his big toe in and then settled with a sigh. He waved everyone away with his enormous hand and let the warmth seep into his bones and move his blood. He had endured the cold for too long: the cold without, and the cold within.

Now peace reigned in the chamber, the door shut tight against drafts.

Lady Saura and her handmaid were in consultation over his clothing trunk, and the murmur of their voices washed over him.

"Aye, and 'tis dyed a serviceable brown with braid at the sleeves and hem...."

The other serving women worked quietly under Saura's direction or settled with their sewing. Their hushed chatter reminded him of a spring bath four years ago, and in his mind's eye he saw the large chamber as it looked then.

Built off the great hall, it was dominated by the polished wooden master's bed, raised on a dais, fit with a canopy and hung with curtains to keep out the winter winds. The clothing trunks sat against the opposite wall, close enough to the hearth to keep the contents dry but not to catch a stray spark. Blessed with more light than any other room in the castle, the solar contained clusters of stools and benches in the window seat where the women worked. Windows gazed down into the fenced garden of the bailey. The iron grille protecting them cast square shadows into the room and the wooden shutters were finished with elaborate carvings.

William chuckled as he remembered how his wife had insisted on first the windows, then the carvings, then...the glass. His father had shouted she would beggar them with these ridiculous feminine ideas, and Anne had shouted back, telling him to fix his own dinner and mend his own clothes and bear his own grandchildren. It had been quite a violent altercation, and in the end Peter had cheerfully placed the glass in the windows and Anne had continued to bear him grandchildren.

Until she died. William had laid her to rest, and now waited for the familiar rush of grief, but there lingered only a sweet melancholy. He missed her: her boisterous laugh, the scent of lavender on her clothes, the plump cushion of her body against his at night. But he no longer mourned her, and if this monstrous handicap had not visited him he would have cast his eye around for a woman to marry. He sighed and dug the rag out of the bottom of the tub.

A rustle of material caught his ear, and one of the maids stepped up to test the water. William perceived the swirl of her finger by his thigh and smelled the spicy scent of carnation, and grinned. Catching her hand in his, he rubbed the soft skin beneath his thumb and rumbled, "Wench! Is my leg so interesting you yearn to touch it?"

The girl said nothing, only laughing in a startled, breathless way and tugging against his hold.

Emboldened by her laughter—she was obviously not afraid of him or his blindness—he tugged back. "Don't go, I have more I can show you than mere leg!" With a jerk, he pulled her into the tub and onto his lap.

Water rose in a great splash and they were instantly wet from head to toe. The girl gasped and struggled in an inept, careless manner, as if she weren't accustomed to having a man hold her. The quick skim of his hand down her soaking body assured him this couldn't be the case. Any wench blessed with generous bosoms and hips and a tiny waist had been the recipient of many an embrace.

Her amorous struggles grew wilder and less effective and a pleasured smile split his bearded lips. The tiny squeaks she let out were charming, showing spirit but not resistance. This girl knew all the tricks.

His manhood rose in immediate response to such blatant encouragement. Her hips rubbed against him as she kicked out and weakly tried to rise. Her fists pummeled his shoulders as he gathered her to him, turned her sideways and slanted her derriere across his lap. Her head fit into the crook of his elbow, her braid slid over his arm. With a warrior's laugh, he captured her flailing fist and tightened the crook of his arm beneath her neck. She was held now, stationary enough for him to find her mouth with his own.

In only a moment, he changed his opinion of her experience. Her mouth yielded, easily opening for his insistent tongue. But she didn't know what to do with him when he surged inside. She didn't meet his thrusts, didn't answer his lures—but she reacted. That mouth was sweet and hungry, amazed and willing. His intentions gentled and turned to guidance.

He relaxed the grip of his arm on her head and supported her back with his huge hand. He massaged up and down her side, petting her, mellowing her. He freed her hand and placed it against his chest, on the flushed skin above his heart. She snatched it back, but he patiently retrieved it and replaced it, still stoking the fires of her innocence with his lips. This time it stayed. Her fingers flexed into the curling hair blanketing his skin, trembled and flexed again.

He broke the kiss with a moan. "Sweet thing," he whispered into her ear as he searched the rim with his tongue. A moan of her own puffed across his cheek.

His remaining hand went exploring. Cupping her breast, he circled the nipple, tight with chill and nerves. The heel of his palm kneaded the mound warmly, tenderly, thoroughly, until the woman stretched across his thighs melted into limp pliancy. Gratified with the return for his effort, William bestowed one last fond stroke and searched further. The tuck of her waist confirmed his first hasty diagnosis, and her firm belly quivered as his fingers slid across. The drenched material of her skirt bunched at her knee and his hand eagerly sought the bared skin of her calf. As his fingers made contact, his breath tangled and she sighed and tossed, jerked from her lethargy. With the instincts of a magician, William captured her mouth again, delighting her with the return of his lips, and slid his hand up the long, silken pathway of her leg. The pathway to heaven.

And heaven was so close, so close—

A dose of ice cold water splashed his back and brought him crashing to earth. Two powerful hands pushed him backward and grasped the girl by her armpits. She was yanked from him and dragged out of his reach.

He rose to his feet in fury, restrained from attack only by his blindness.

His indignant roar would have frightened lesser women, but Maud was no lesser woman. "Are ye crazy, Lord William? Would ye attack a young damsel in full sight of the maid servants?"

He roared again, inarticulate with wrath, and then as his sense returned, he shouted, "Attack? Attack? All she had to say was 'nay,' and I would have released her. By our sweet savior, Lady Saura, did you hurl that cold water?"

Saura, soaked and shivering by the fire, answered, "In a manner of speaking."

Wringing out her full draped sleeve in both her shaking hands, she swiped her hair off her forehead. "I can't do that, my lord. The girl is spoken for."

Saura smoothed the rough wool of her garments and cursed her own industry. Her sense of responsibility had demanded she perform the jobs Lord Peter assigned her before she availed herself of the materials he offered. The time had come to sew new clothes, clothes marking her as a lady and not a serving maid. "The girl's gone."

"Gone! No one has left this room!" His anger brought him back to his feet. "And I want her now!"

Aggravated beyond sensibility, Saura shouted back, "I'll speak to your father! We'll make arrangements!" With a swish of her wet skirts, she turned on Maud's arm and exited the door held by a sewing maid who, overcome with nervous humor, bit her hand to stifle her laughter.

"Do ye want me t' warm your bath, Lord William?" asked Linne, one of the serving women. "I've got more water heated."

"Nay," answered William slowly. "Nay, I think my bath has been sufficiently warmed already. The cold has been vanquished."

Other Books in Castle Series