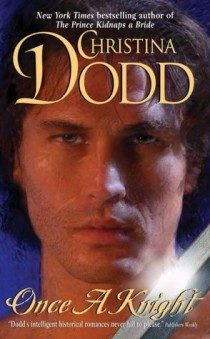 You can order ONCE A KNIGHT: Good Knights #1, at these online retailers:

ONCE A KNIGHT: Good Knights #1 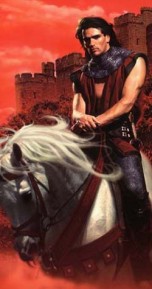 Only a threat to her life can make strong-willed Lady Alisoun hire Sir David of Radcliffe to protect her castle. Although he had once been a hero and master swordsman, the good life has been a little too good, and his warrior skills have become as rusty as an old suit of armor. But he needs the money to support his motherless daughter, and Alisoun is in no position to haggle.

At Alisoun’s grand estate, Sir David does indeed discover peril and dark secrets. But the danger that surprises him most is how quickly and unwittingly Lady Alisoun lays seige to his own well-protected heart.

Sir David is one of my favorite heroes, a mature knight who faces certain defeat and fights back anyway, a father who adores his daughter and wants the best for her, and the kind of man who pees farther than the other knights and swaggers around afterward because he knows what impresses the warriors he must fight next. He was fun to write.

"Are you the legendary Sir David of Radcliffe?"

A woman’s melodious voice broke David’s stupor and a toe prodded him in the middle of his back. He opened his eyes a slit. Tall yellow trees flooded his vision. Then he blinked, and the trees transformed themselves into straw spread on the floor around his head. Groaning, he remembered. Sybil’s alehouse. A morning spent deep in a foaming cup. Then blessed, drunken obliviation. He closed his eyes again.

"I repeat myself. Are you the legendary Sir David of Radcliffe?" The lady’s voice lowered in disdain. "Or are you dead?"

This query came accompanied by a kick in the ribs, and before he could stop himself, he flipped over and grabbed the slippered foot. "I’m not dead yet." He glared through eyes gritty with pain. "But you will be if you don’t stop kicking me."

The slender, white form above him didn’t shriek or flail her arms or gasp in fear. She simply shifted her weight to maintain her balance and signaled to halt the rush of the two men who guarded the door. Muttering and glaring, the burly fellows retreated, and the woman repeated patiently, "Are you Sir David of Radcliffe?"

He didn’t even frighten her. Bringing his hands to his face, he rubbed them over his throbbing forehead. By the saints, even his hair hurt. "If I say aye, will you go away?"

As relentless as the famine which destroyed his dreams, she asked, "Are you David of Radcliffe, the king’s own champion?"

Fury roared through him, sudden and cleansing as a storm across the Irish Sea. He found himself on his feet, shouting right in her face. "Not anymore!"

She considered him without flinching, her cool eyes as gray as a wash of winter fog. "You’re no longer Sir David, or you’re no longer the king’s champion?"

Clutching the scraggly locks at his forehead, he groaned and staggered backward, collapsing onto a bench. This woman could drive him mad. "No longer the king’s champion."

"But you are the legendary mercenary who rescued our sovereign when the French pulled him off his horse and kept a dozen knights at bay while the king remounted and escaped?"

"Fifteen knights at bay." Moving slowly, each muscle aching from the effort, he leaned back until the table supported him, and examined his tormentor.

She was tall. He wagered she could stand flat-footed and stare down at the king’s widening bald spot. She was delicate. He doubted if her fair skin had ever glimpsed the sun or her slender fingers performed hard labor. And she was rich. Her white velvet gown molded her curves with a loving touch, and the white fur which trimmed the neckline and the long tight sleeves must be worth more than his entire estate.

Bitterly, he once more tasted defeat. Everything he’d worked for, all his life, had turned to ashes, and disaster stared him full in the face. His daughter would suffer. His people would starve. And he couldn’t save them. The legendary mercenary David of Radcliffe had fallen at last.

"I have a proposition for you, if you are Sir David of Radcliffe," the lady said.

"I have need of a mercenary." She ordered two brews, then seated herself on a bench. "I’ll be satisfied with nothing less than the best. I have gold with which to pay."

The promise of gold spoke to David as nothing else could. Because it was his nature to be suspicious, he demanded, "What is it you want?"

"For what? Your lands? Your castle?"

Furious that the gold so quickly slipped away, he said, "I’ll not intercede between you and your husband."

She folded her hands together at her waist. "I am a widow."

His gaze skimmed her again, and abruptly he understood what she wanted him to know. "A rich widow."

"Have you got an inopportune suitor?" he guessed.

So she wouldn’t tell him what he wanted to know. Fine. He’d find out what he wanted soon enough. No woman ever kept a secret, and this one, for all her poise, was very much a woman. "I am a legend, and legends come dear." He named an exorbitant sum.

"Every month," he added hastily.

Again he examined her. He hadn’t previous thought her a fool, but he should have known. All women were fools -- but so were men who imagined they could collect such wages on the strength of a vanished reputation.

"One month in advance."

Opening her purse, she counted out the gold and held it before his eyes. "Is this sufficient guarantee of my good intentions?"

She dressed well, she treated him as if he were a worm, she had guards … aye, she was wealthy, so what was the harm in shearing just a little of her fleece? He wrapped his fingers around the money, trapping it and her hand. He felt the delicate flesh and the chill of the gold. He thought how easily he could break her and how much he needed that money.

Snatching his grip away, he polished the sensations away from his palm. "I’m not the man you want." He started for the door.

One of her men-at-arms reached out an arm and blocked the entry.

David stopped and contemplated the arm, then the massive fellow to whom it belonged. "Move."

David placed his hand on the hilt of his knife.

The man drew his blade.

Without a sign of regret or relief, Ivo brought his beefy arm back to his side and left the way open for David.

David couldn’t believe it. It wasn’t respect for a mercenary legend that made Ivo obey, but a word from his mistress. Resentment cramped in David’s gut. He could have used the combat. He needed to take out his hostility on somebody. Instead he slammed through the door, prepared to storm off and leave this farce behind.

Instead the sun hit him and he staggered. Damn, it was bright. Bright and unseasonably hot, just as it had been for the last two years. The drought. The damned drought had driven him from his home. Would it never end? Clutching his face, he leaned against the wall and mumbled, "Bloody ale."

"It is not the ale, but your excessive intake that is at fault." The lady’s precise voice ground at his nerves like a grind stone against Toledo steel.

"I am Alisoun, countess of George’s Cross." She had appeared fair in the dim inn, but now she positively glowed. White gown, fair skin, and were those freckles that marched across her nose? "Are you not Sir David of Radcliffe?"

"You have truly lost the title? When did this occur?"

"This morning." His stomach roiled as he remembered. "On the tourney field. The legendary David of Radcliffe fell in defeat."

"‘Tis tragic that you failed just when I have need of you, but I need a legend, not a one-time hero. I want you."

In a voice harsh with pain, he said, "Don’t you see? I’m not the man I once was. Every fledgling knight in Lancaster has challenged me these last days to brag they fought the greatest mercenary of our times. I defeated every one of them -- beardless boys with more bravado than sense. But when I came up against a seasoned knight, I lost."

"Your other trials exhausted you." She caught his hand and opened it, then placed the coins in it and closed his fingers around them. "Here’s your first moon’s wages. Should you decide to accept my employment, I’m at the Crowing Cock Inn. Be there by dawn."

"M’lady," her man Gunnewate remonstrated. "Ye can’t give a scoundrel money like that and think ye’ll see return!"

"He is the legendary David of Radcliffe," Lady Alisoun said. "He shall not disappoint me."