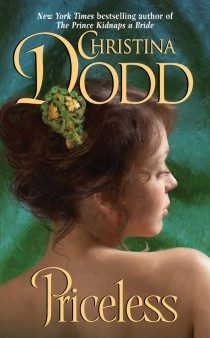 You can order PRICELESS, at these online retailers:

Headstrong and adventurous, Bronwyn Edana regularly stuns polite society with her reckless exploits. But there is one type of exploit the fiery beauty had never experienced. Still innocent when it comes to men and their roguish ways, she can barely believe the breathless desire she feels for Adam Keane, a distinguished nobleman and a man with more than his fair share of liaisons in his past …

Branded by a haunting tragedy, Adam will not rest until he lures Bronwyn to his bed. When a shocking conspiracy threatens their lives, he’ll steal her from the dangerous streets of London to the sweeping English countryside — for he has seen enough of the world to know a passion like theirs is priceless.

PRICELESS is my third historical, and features Bronwyn, a typical Dodd heroine who fights for her family, her ideals…and finally her own happiness.

"Our signal to proceed, my dear." Adam offered his arm.

When Bronwyn laid her hand on it, he captured her hand with his. He held it like a man with his sweetheart, fingers curled together, palms together. The simple contact brought her gaze to his again. Again she found herself unable to breath, to move, to think. Something about this man made her common sense collapse like a house of cards.

Adam drew her outdoors, into the heated darkness. A great bonfire leaped in the middle of the square, answering the flames atop the hill, calling in the summer. A swarm of instruments, violin, flute and harmonica, squalled on a platform. The players cajoled off-key bits of melody, then whole bars of music, and at last, inspired by the occasion, a rollicking song. Although Bronwyn had never heard it before, its concentrated rhythm set her foot to tapping.

With a tug of his hand, Adam had her in the center of a circle of clapping villagers. "I don't know how to dance to this," she warned.

"Nor do I," he answered, placing his hands on her waist. "Have a care for your toes."

She had no need to care for her toes, for Adam lead with a strength that compensated for his limp. He kept his hands on her waist as he lifted her, turned her, swung her in circles. Under his guidance, she relaxed and began to enjoy the leaping, foot-stomping gambol. The community cheered, not at all distressed by the innovative steps, and the whole village joined them around the bonfire.

Girls with their sweethearts, men with their wives, old folks with their grandchildren, they all whisked by as Adam twirled Bronwyn around and around. Bronwyn laughed until she was out of breath, and when she was gasping, the music changed. The rhythm slowed, the frenetic pace dwindled.

She saw Adam's amused expression change as he drew her towards him. His heavy lids veiled his gaze, and she knew he'd done so to hide his intention. She wondered why, then felt only shock as their bodies collided.

Shutting her eyes against the buffet of his heated frame against hers, she took a long, slow breath. The incense of his skin mated with the scent of the burning wood, and beneath the shield of her eyelids fireworks exploded. She groaned as her own body was licked by the flames.

Before she was scorched, he twirled her away, then back in accordance to the rules of the dance.

There were people around, she knew, but she pretended they weren't watching their lord and lady. She pretended Adam and Bronwyn were alone.

Ignoring the proper steps, Adam wrapped himself around her, one arm against her shoulders, one arm at her waist.

Her hands held his shoulders. Her fingers flexed, feeling the muscle hidden beneath the fine linen. She could hear his heart thudding, hear the rasp of his breath and his moan as she touched his neck with her tongue. She only wanted a taste of him, but he mistook it for interest, for he scooped her up.

Her eyes flew open. He'd ferried them to the edge of the dancing figures, planning their escape like a smuggler planning a landfall. A whirl and they were gone into the trees. Looking back, she could see the sparks of the bonfire, like a constellation of stars climbing to the sky, but she knew no discomfort at their leaving.

This was what she wanted, what she dreaded, what she longed for. Since she'd met Adam, she didn't understand herself. His gaze scorched her, and she reveled in the discomfort. His hands massaged her as if he found pleasure in her shape; they wandered places no one had touched since she'd been an infant, and it excited her. Even now as he pulled her into the darkest corner of the wood, she went on willing feet.

He pushed her against the trunk of a broad oak and murmured, "Bronwyn, give me your mouth."

She found his lips and marveled at their accuracy. His arm held her back, his hand clasped her waist; all along their length they grew together, like two fevered creatures of the night.

He exalted at the explosion of heat. This little virgin kissed like a dream. Willing, whimpering just for him, she created impulses he believed stifled by maturity. He wanted to pull her into the grass and lift her skirt and plunge into her. He wanted her breasts in his mouth, his hands on her thighs, and a long night ahead. Was this midsummer madness, as the villagers claimed? No doubt, for madness pounded in his veins and brought him pushing at her like a stag with a doe in heat.

Lifting his head, he looked down on her face, dappled with moonlight, and knew he'd never forget this moment. The angles of her face, the pale brows, the sensitive mouth -- they were engraved on his mind. Propelled by need, his hand caressed her throat, then slipped to the ruffle that teased her bosom. She didn't move; he wondered if she were too stunned. Wanting to weave the magic around her, he whispered, "Don't stare at me with those big eyes. I won't hurt you." Delving below her corset, he found what he sought.

Her breast felt smooth, firm, topped with a nipple already tightened with his kiss. He groaned aloud, and couldn't believe his own unbridled reflex. His response recalled adolescence: the clumsy fumblings, the unrestrained passion, the whole-hearted delight. What had this girl given back to him?

What had she taken? Where was his restraint? She was a girl, in experience if not in age, and a gently-bred girl at that. He was a cad to press her. Obviously, she didn't understand the ramifications of his actions -- of her pleasure. Obviously, he'd taken her far beyond her experience. But temptation whispered in his ear, telling him they'd be married soon. That the wedding could be moved up if this night bore fruit. That the wedding would have to be moved up, for he couldn't wait to have this girl in his bed every night. Couldn't wait to sample her without hurry or secrecy.

"Dear, let me -- " He swooped before he could finish his plea. Lifting her, balancing her on his knee thrust against the bark, he licked her throat, covered her collarbone with a trail of kisses. Artfully he freed her breast; whether so artfully she didn't realize it, he didn't know, nor care.

Ah, she knew, for she whimpered as his mouth closed on her nipple, and when he suckled she went wild in his arms.

She wasn't fighting him. Thank God, she wasn't fighting, for she'd roused the hunter in him, and he would have been out of control. But perhaps the way she wiggled against his leg was worse. Hampered by her skirts, she tried to slide close to his loins. When she couldn't, she rode him like a horse, galloping towards some ever-closer goal. Her eager fingers hugged his head, combed through his hair, discarded his ribbon. When he nipped her, she wailed, "Oh, Adam," and his name never sounded so good.

Keeping his arm around her waist, he let her down and ordered, "Let's go."

"Where?" she asked, but her question didn't interfere with her head-long flight beside him.