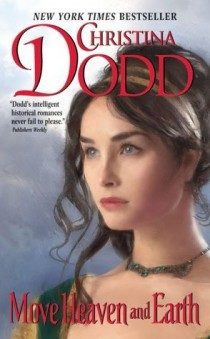 You can order MOVE HEAVEN AND EARTH, at these online retailers:

In a searing novel of love, war, anguish and love, Christina Dodd explores the secret places where love hides…and the passion that promises healing.

Could Her Love Heal His Damaged Soul?
Sylvan Miles dreaded the moment she’d see Lord Rand Malkin again. Once a dashing rogue, he’s returned from battle a changed man. Sylvan, too, has suffered. Sharpened by scandal and tragedy, she vows to heal Rand’s body and spirit.

But when Sylvan arrives at Clairmont Court, the man she encounters is far from the shattered ex-soldier she expects. Rand takes great pleasure in taunting her with stolen kisses and the legend of his ancestor’s ghost. But Sylvan isn’t fooled by his bravado and sets out to break down his defenses . . . while she fortifies her own against temptation.

The idea for MOVE HEAVEN AND EARTH came from a newspaper article about female nurses who served in Vietnam. The reporter said they had been caught up in the action, worked horrible hours, seen and treated the most dreadful wounds, and came back as scarred by their experiences as the men who fought the battles. I wanted to tell what I knew and what I could imagine of their stories, and so I wrote MOVE HEAVEN AND EARTH with those brave women in mind.

"A ghost walks the halls of Clairmont Court at night."

Miss Sylvan Miles clutched her bonnet in one hand and a strap with the other as the two-wheeled open carriage climbed yet another hill. With a throaty chuckle, she said, "I’d be disappointed if one didn’t. Have you seen this ghost?"

"Aye, that I have. Thought myself mad when I saw him striding the grounds. ‘Tis the ghost of the first duke of Clairmont."

His voice throbbed with emotion, and he trembled, but Sylvan wasn’t afraid. She’d seen worse than ghosts in her time.

Briskly, she demanded, "How did you know that? Did you ask his identity?"

"Nay, Miss. But he looks just like the portrait of Radolf, first duke of Clairmont. A fearsome man, tall and brawn. A warrior with mace and sword."

She grinned, secure in the knowledge he couldn’t see her. "If he’s carrying a mace, I’ll do my best to avoid him. Warriors exhaust me."

"You’re not the first to remark on that," Sylvan agreed. Then the carriage topped the hill, and she cried, "Stop!"

Before Jasper had pulled the carriage to a complete halt, she leaped off the steps and onto the ground. A tangled madness of ancient forest and moor, cliffs and savage ocean stretched before her. She waded into the new green grass, absorbing the scent of it as she crushed it beneath her feet. Close at hand, heather and bracken rippled, and beyond that, the sea’s surface undulated at the command of the wind. On the sea, a few fishing boats, dwarfed by distance, bobbed among the rocks. Clasping her hands at her breast, she tried to contain the welcome ache inside her. It was a home coming, but she’d never been here before.

"‘Tis a Godawful primitive place, ain’t it?" The coachman sounded as if he hoped she would agree. "Most ladies react just like you. I’ve had some of them want to turn back right here, but they always go on."

"I’ve never seen anything like this." She wanted to run and dance, to find a high place and jump off, trusting to the wind to carry her —

"Willing to brave the horrors of Clairmont lands for the prestige and wealth of the duke."

— And then drop her gently to earth, there to rest and heal.

"‘Course, you can’t leave," Jasper said. "His Grace said you were the new nurse for Lord Rand."

Rest. God, what she would do for a good night’s sleep.

"Told him it was foolish, I did. The other nurses were men, as is proper, and they couldn’t deal with Lord Rand. The tantrums and the shouting and the swearing have sent four strong men running in eight months. How’s a woman going to take it?" His gaze ran contemptuously over her. "‘Specially a tiny thing like you."

Sylvan stood stock still, struggling with a sense of betrayal.

Garth Malkin, duke of Clairmont had claimed his brother was an invalid. He’d implied that fortune had crushed all spirit from Lord Rand. His Grace’s reassurances were the reasons she had allowed herself to be persuaded to come, for she had not escaped her last encounter with Lord Randolf Malkin unscathed.

But she had found she couldn’t bear the thought of Rand’s scalding blue eyes bleak with defeat, nor his vibrant figure wasting away. She had imagined herself gently coaxing him back to life, bringing a smile to his pale lips and lighting the spark of his soul once more. Yet Jasper was insinuating …

Squaring her shoulders, she smiled. "You’ll have to wait and see, won’t you?"

He stared down, slack-mouthed, then an answering smile crept over his sullen face. "Perhaps you’ll do. His Grace is no fool, is he?"

"Through the village, around the hill and up. Three hundred years ago, Lord Radolf built it facing the ocean so the windows rattle in the mildest breeze. And when a storm blows up, we’re lucky to keep the fires lit and the smoke out of the house." Sourly, Jasper said, "The first duke was just like today’s Clairmonts. Not interested in good sense and comfort, only interested in struggle and challenge. Whole damned family’s dicked in the nob."

Ho, now that was interesting. "Why do you say that?"

"Best get in, Miss. They’ll be looking for you at the manor."

She couldn’t urge him further. She might not have the breeding, but her governess had been aristocratic enough for them both, and she’d taught Sylvan that a servant didn’t gossip, and if one did, a lady didn’t listen. Sylvan had always thought it a dreadful waste of good information, but that was her vulgar ancestry coming to the fore. Placing her foot on the step, she bounded back into the carriage. "Were you at Waterloo?" she asked.

"Aye, Miss. I was Lord Rand’s body servant." He spoke to the fine pair of matched horses, and they jolted down the winding, rutted road. "Still am, for that matter. I change his sheets, care for his clothes, wash him, dress him -- "

"Really?" She sat forward in the seat. "How does he keep abreast of that which must interest him?"

"I bring him the London papers when they arrive."

"I tell him what he needs to know."

Perhaps Garth had justification for worry. Perhaps Lord Rand had slipped into a decline of sorts. She eyed Jasper assessingly. "So he depends on you completely. You care for him when he has no nurse in residence."

Jasper nodded slowly. "So I do."

"Tell me about his condition."

Jasper’s bluntness bordered on rudeness, but Sylvan wasn’t offended. If he had been at Waterloo, then he’d treated the wound that downed Lord Rand, and he knew more about his condition than anyone. And Jasper had already proved he felt protective about the family. Perhaps the tale of the ghost had been nothing but a fiction to scare her away.

The gig rattled along the rutted track. They drove through a cultivated hollow where men plowed the soil and pressed seed in place, then into a pleasant country village with a few shops and homes. "We’re starting the assent to the manor." Jasper pointed with his whip. "If ye’ll look up as we go around this corner, ye’ll catch yer first glimpse."

She did, and no etiquette could stop her exclamation of, "Mercy!"

The house straddled the rocky hilltop like a gothic battleship defying the elements. Each succeeding duke evidently had a different idea on style and good-taste, and some of them must have been, as Jasper claimed, mad. The hodge-podge of chimneys, windows and carvings tried, but could not distract from, the jumble of gray stone, sandstone and marble of the exterior.

"It looks," Sylvan said in wonder, "as if a giant child kicked over its blocks, then tried to re-assemble them."

"Most visitors are in awe." Jasper’s spine straightened beneath the black coat.

"In awe." Immense stands of horse chestnut and mountain ash whisked past, then a series of hedges that hid the house. Then they rounded the bend and the house showed itself in its full glory. Nothing about it resembled her father’s new house, which had been designed and decorated by the finest craftsmen in England, but something about Clairmont Court welcomed her -- her, the daughter of a merchant. They pulled up to a series of broad steps that led to the terrace and then into the house, and she stared at the towering structure. "I am in awe. I have never seen anything remotely resembling this. It’s chaotic. It’s barbaric. It’s — "

A wooden chair crashed through a tall narrow first story window and skidded across the floor of the terrace.

"Likely to get worse," Jasper finished for her. "He must have heard you were coming."