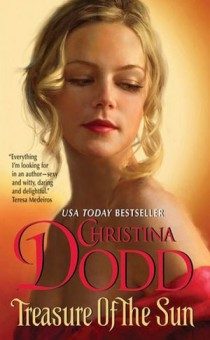 You can order TREASURE OF THE SUN, at these online retailers:

TREASURE OF THE SUN

Black-eyed Damian de la Sola was like no man Katherine Maxwell had ever known. Powerful and seductive, the aristocratic Spaniard unleashed a passion the Boston beauty vowed to resist.

De la Sola’s blood ran hot for the bewitching widow of his most trusted American ally. Consumed by love and honor-bound to protect her, he relentlessly pursued her into the California wilderness.

Together, they followed their destinies. From a magnificent hacienda to a glittering cave carved deep in the mountainside, they searched for a golden treasure—and discovered a priceless love.

REASURE OF THE SUN is my tribute to those great old Harlequins with the autocratic heroes and the feisty blonde heroines.

There was no doubt; anger held Damian in its grip. Katherine opened her lips to explain, to tell him her identity.

He repeated, "Say nothing." His mouth slid up to her wrist, and he pressed his lips there against the thundering pulse. She felt his breath as he murmured, "Or I'll find another way to seal your lips."

She stood frozen to the floor. Had he drunk enough to blur his vision and blunt his senses? Katherine was too prudent a woman to let the deception continue.

Yet when she took a breath to speak, she looked at him. His black eyes watched her, almost threatening her with his gaze, and her words hung, unuttered, in her mind. Those black eyes closed with satisfaction as he slid his mouth up her arm to her elbow, and she cursed the open sleeves she wore.

His mustache brushed the tender skin at the inside of her elbow, his tongue tasted her, and that was too much. She objected, "I must tell you —"

He'd been waiting for her words. His hand encircled her shoulder; he pulled at her, wanting her against him. She planted her feet, determined to resist, but for the first time she discovered how Damian towered over her. She discovered he could jerk her up on her toes with one hand at her waist; she discovered when his fingers cupped the back of her head she couldn't move it.

She discovered his muscles in the press of his body from her chest to her knees.

She didn't like the way he overwhelmed her good sense with pure intimidation. She didn't like the scent of him, of tobacco and brandy and mint, or the strength of his body emphasized next to the vulnerability of hers, or the sight of his face, so close against hers.

She didn't like the patience he exhibited as she looked and sniffed and clutched, or the way the frozen parts of her body tingled at the thought of tasting him.

She didn't know what to do. She'd never dared to dream of such an instance. His lips were too close; only a fool would open her mouth to remonstrate. Yet the patience she noted still lurked there, a faint smile, then the whisper, "Catriona."

He swooped on her, as she'd known he would.

He bent her over his arm, tucked her head in his shoulder, and kissed her until she kissed him back. The world became a place of total darkness, untouched by any color, yet whirling all her senses into a pool of pleasure. A refreshing mist filled her lungs, different from the normal air she breathed. It worked like a drug, changed her from plain Katherine Anne to a creature of the senses.

Her hands lifted to his hair and clutched at it. It slid silky between her fingers, and she twisted it like a rope to hold his head close to hers. She liked the texture of it; she wanted to massage it with the flat of her palm, but she feared to release her hold. She feared he'd remove his mouth.

Craving flowed from his mouth to hers, a craving that tightened the muscles of her stomach and brought her to her toes. Then solace came, a teasing morsel for her appetite. Then craving again, stronger this time, building on her previous desire, carrying her up, bringing her body to rigid attention.

This time he didn't feed her. He left her wanting, tearing his mouth from hers. With his thumb on her jaw, he tilted her head back. His lips pressed against the hollow of her neck, just below her chin; she struggled and cried out. She was sensitive there. No one ever touched her there. This man used the wet of his tongue and his intoxicating breath, and the sensation wasn't ticklish. It wasn't laughter she felt, but a jolt of pure heat to her body.

How could such a kiss radiate from her face, her neck, extend down her limbs? How could it seek and find the center of her body? A sound struggled to escape her, a release of emotion such as she'd never imagined she'd desire.

She suppressed it, but he seemed to know and it angered him more. She could feel his fury vibrating in his arms. She could feel it lifting her off her toes. She hung suspended in mid-air, then in tiny increments her body was lifted and laid on the fainting couch.

A crafty movement, done by a master. Done slowly enough that she wasn't alarmed by the perception of falling, yet quickly enough she knew what was happening and was alarmed -- alarmed by the message he transmitted.

With a sigh, she lifted her heavy eyelids and gazed on him. His thin face revealed harsh satisfaction. "Catriona, do you understand what this means?"

She said nothing, mute with emotions she'd never imagined.

"Do you understand?" he insisted. "You'll never go away from me now. I've been biding my time, waiting for you. Listen. Do you hear what I'm saying?"

Oh, she heard. She heard with her body, and it didn't matter if he knew he kissed Katherine or not. As a woman, she could understand every word. She was his, to do with as he liked. She couldn't move unless he allowed it; she couldn't call out or it earned her a kiss. She couldn't refuse his passion, for his passion reduced her intelligence to less than a whisper.

The couch held her buttocks and her legs, but he still held her head and back in his arms. He still stood above her, menacing her with the bulk of his shoulders, retaining control with his legs on the ground. Never taking his eyes from hers, he lifted his knee and pushed it between her thighs.

"Do you understand?" he whispered.

It was too much. For her body, chaste too long; for her dignity, tattered as her dress.

"Understand this!" She jerked back, then forward, bashing him under the chin with her head.