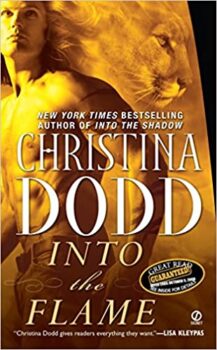 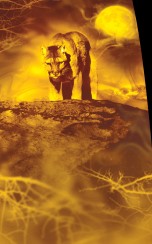 In this “devilishly clever, scintillatingly sexy paranormal series,” (Chicago Tribune) New York Times bestselling author Christina Dodd introduces the Wilder brothers — and the evil that’s haunted their family for centuries. Finally, here is the missing link that could redeem them…

Brutally handsome cop Doug Black is determined to find the birth family who left him with nothing but a terrifying inheritance: the ability to change into a savage golden cougar. His search leads him to a woman as dauntless and exotic as her name. Firebird Wilder is bitterly familiar with supernatural gifts, and flees on discovering his secret, leaving Doug alone once more. But no one can escape a wild cougar on the hunt. When he finds her, they both must decide which is more powerful — the love that binds them together…or the secrets that threaten to tear them apart.

INTO THE FLAME brings together all the elements of Darkness Chosen into one earth-shattering climax in the battle between good and evil, and Firebird Wilder must at last face the truth about herself and her lover…

ON THE CAMPUS OF BROWN UNIVERSITY

The other girls lived in an apartment five minutes from Firebird's dorm. Meghan had ice cream, so of course Firebird had to stop by for a bowl and a quick gossip, and by the time they’d gone from high spirits to quiet sentiment as they realized their years in college were finally over, it was one a.m. and Firebird figured she’d better get back to the dorm or she’d fall asleep in a chair.

The main walk of the campus was still hopping with celebrating students, but the crowds were thinning fast and when she turned off toward her dorm, it got darker, quieter. She didn't mind. Douglas had told her the campus wasn’t safe, but her father had taught her to protect herself, to be careful, to be aware. She was all of those things.

The evening hadn’t turned out as she had hoped. Douglas had hinted at his past, had promised to fill her in, then his work had interfered. And she’d made him promise that they’d talk in the morning, but she’d seen the look on his face — he didn’t want to. What secrets did he hide? He was a policeman. How bad could his past possibly be?

As she strolled along the tree-lined walk, she at first didn’t notice the sounds behind her. She was listening for footsteps, not the rustle of leaves and the creak of branches. But once she heard them, she knew what they boded.

Someone was stalking her, creeping along through the trees, and that someone wasn’t all human… A Varinski. Somehow, one of the evil Varinskis had found her.

She didn’t look around, didn’t indicate that she knew she was being followed. Her heart pounded, her skin flushed, yet she walked at a steady pace.

Don’t run, little Firebird, she heard her father’s voice rumble in her head. Running brings out a hunter’s urge to chase, and you can’t outrun a wolf or a panther. You can’t out fly a hawk. But you can outsmart them, and you can outfight them.

As the Varinski moved from tree to tree, she listened to the sounds, trying to figure out what kind of creature was tracking her. A bird of prey, perhaps, or a great cat leaping between the branches.

Her dorm loomed ahead. Lights illuminated about half the windows. People were awake and nearby. She could scream for help. But someone would get hurt.

She opened her purse, pulled out her cell phone, debated about calling Douglas. He would want her to — but then, he wouldn’t be happy to discover she was walking alone, and if she put her phone up to her ear, that might force the stalker to attack.

How had he located her? What did he want?

As she got closer to the dorm, the sound behind her grew more pronounced. She dug out her keys, threaded them between her fingers so a key stuck out between each knuckle. She opened her phone and dialed nine-one… and before she could hit the last button, the door to the dorm burst open. Eight guys came dashing out, Jacob in their midst, wearing nothing but baseball caps, body paint, and running shoes. They hooted as they passed her. She pumped her fist to indicate her approval, and slipped inside before the door could close.

Then she fled. Fled down the hall and up the stairs to her bedroom. She didn’t turn on the light, but crept to the window. Staying well back in the shadows, she looked out.

There it was, crouched in the shadows of a giant oak, some kind of great cat, stretched along the branch. The moonlight seeped through the leaves and picked up the smooth glory of its coat, and even from here she could see its dark eyes, watching her window. Its tail twitched slowly, as if the loss of its prey had irritated it.

What did it intend to do to her? Was this a rogue Varinski, entertaining himself by stalking and killing the daughter of Konstantine Wilder? Or did the family have plans to kidnap and hold her as a pawn in their plot to destroy her family?

She had to go. She had to leave. She couldn’t wait until graduation, she needed to go at once — and she couldn’t tell Douglas why. He would never believe this.

“Oh, my love.” What had she been thinking, getting involved with a normal guy? He wouldn’t understand about the pact with the devil and her family’s special talents. How could he? It was absolutely insane. Worse, as her mate, he’d be in danger, the same kind of danger that shadowed her.

Outside the window, the great cat moved at last. It stood and stretched, then lightly leaped down out of the tree.

She got her first good look at it. A cougar. It was a cougar.

She frowned. Her heart stopped. A cougar? But just tonight, Douglas had given her a large, soft, stuffed cougar. As the cat outside began to change, her heartbeat leaped.

The claws retracted. The bones warped into new shapes: the paws became hands, the back legs lengthened and straightened, the shoulders got broader, the hair retreated onto the head and chest and genitals.

The face changed, too, becoming a man’s face, a familiar man’s face … the face of the man she loved.

She stared. Stared so hard her eyes hurt.

Douglas stood out there, naked in the moonlight, a tattoo that looked like great claw marks ripping the skin on his left side.

She hadn’t seen that before. He’d taken great care not to take off his shirt in the light. Smart guy, because that would have tipped her off for sure. Her brothers had tattoos that were just as vivid, just as distinctive, and they had come naturally the first time they became beasts.

Completely unself-conscious with his nudity — well, why should he be self-conscious? Half the guys on campus were streaking — Douglas loped away.

Virulently, she hoped he was happy with himself. Because he’d managed to get laid, but he hadn’t caught her. He hadn’t killed her. And he wasn’t going to get another chance to try.

Yet she could never forget Douglas Black.

She stroked her hand over the slight mound of her belly. Douglas had left her a souvenir she would treasure her whole life long.