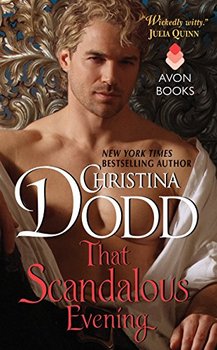 A simple statue began the scandal.

An innocent English miss conceived of it, her hands gliding across the clay, delineating each smoothly defined muscle and sinew, creating a sculpture of the man she worshipped. When the likeness was exposed, along with Miss Jane Higgenbothem’s secret tendre for Lord Blackburn, the ton’s gleeful contempt sent the lady back to the country in disgrace.

Now, a decade later, she’s back in London, as a chaperone to her beautiful niece. But to Blackburn, Jane’s unwitting model, the cool, reticent spinster is still a challenge. She once made the arrogant rake a laughingstock; so why is he tempted to revive an affair that almost began so long ago, on that scandalous evening…?

My eternal favorite romance is the prim, oppressed heroine who, when given the chance, blossoms and becomes a lioness. In this prequel to The Governess Brides, Jane Higgenbothem of THAT SCANDALOUS EVENING is just such a woman. She begins the story as much-maligned chaperone to her beautiful niece, Adorna, escorting to balls in London, and at once meets the man who caused her disgrace years ago …

“Ma’am.” A gentleman of good height and close-cropped brown hair approached Jane and boldly took her hand. “If I were so forward as to introduce myself to you, and acquaint you with my credentials, would you introduce me to your ward? I have the approval of a peer of the realm. Blackburn, tell this honorable chaperone who you are and explain that I’m respectable.”

Jane didn’t move, didn’t look, but froze like a London street urchin who scented danger. From the corner of her eye, she noted a tall man step out of the pressing crowd while the other gentlemen fall back deferentially. She noted, too, that Lord Blackburn stared at her, as if she truly were a street urchin, streaked with soot and out of place.

She was. Oh, heavens, she was.

“I could hardly swear to your respectability, Fitz, without perjuring myself.”

Lord Blackburn sounded stiff and impatient, and Jane waited, quivering, for him to impugn her.

“But I have met this … lady before, and I can introduce you, if you like.”

That was all. Quietly, he performed the courtesies, but said nothing about the circumstances of their former acquaintance.

His companion, Mr. Gerald Fitzgerald, seemed unaware of anything unusual in Blackburn's demeanor. Of course, that was because all his attention was fixed on Adorna. Dear Adorna, who had blossomed beneath the concentrated fascination of so many men.

When he had done his duty, Blackburn did not step away as Jane anticipated. The well-remembered scent of lemon clung to him, making her aware he had remained at her side. When she had completed the introductions between Mr. Fitzgerald and Adorna, he pulled her apart from the company. In a voice low and intense with contempt, he asked, “Stop quivering so! Did you expect me to denounce you?”

Slowly, she turned her head and looked up at him.

She could have sworn she hadn’t forgotten anything about Ransom Quincey, the marquess of Blackburn, but she must have, for his Viking beauty took her breath away. He seemed taller, although that was perhaps a function of her dismay. His blond hair seemed lighter, less golden, as white streaked it. He gazed through the silver quizzing glass she remembered so well, and his midnight blue eyes pierced her until she thought she must be bleeding internally.

“I would not explain to that crowd that you single-handedly exposed me to ridicule and humiliation.” His upper-class accent grew more clipped as he spoke, and his voice deepened as he added, “For the most part, they have forgotten, and I have no wish to raise the spectre of that scandal.”

He probably hoped she would turn tail and run. He didn’t comprehend that worse things had happened to her since that long ago ball.

Her spine straightened, and flush with aplomb, she said, “You seem to forget, the scandal mortified more than one person.”

“Who?” His gaze swept the babbling Fitz, the entire ballroom, before returning to rest on her.

Was he really so uncaring, or was he simply oblivious? “Such an inconvenience, my lord, to think of someone other than yourself,” she said crisply. “So unusual for you, also.”

His nostrils flared as he considered her. “You are impertinent.”

“Following your example, my lord.”

His rangy litheness had given way to a broader, more muscular build, and now he looked as cold and solid as marble. He didn’t care what she thought or what she had suffered, but even for that, Jane was glad. Glad that she’d seen her nemesis. Glad that she’d found her tongue, uncovered her wit, and answered him smartly as he deserved. Any additional disgrace would be worth the self-respect she’d gained.

Then Adorna's beguiling voice shattered Jane's triumph. “Aunt Jane, would you introduce me to his lordship?”

Coming down to earth with a thump, Jane apprehended she couldn’t afford the satisfaction of cutting Lord Blackburn. He might be a rude beast, but he was wealthy, titled, and influential, and for Adorna's sake she had to preserve the fiction of mutual respect. She had perfected the unemotional mask; now she donned it, performed the introductions, and waited, torn between satisfaction and old heartache, for Lord Blackburn to see Adorna. To really see Adorna and fall under the spell of her womanly charms.

The quizzing glass swept Adorna as she curtseyed and murmured of her pleasure at making his acquaintance. “How do you do, Miss Morant?” His smile, his courtesy, his bow was everything a matchmaking Mama could wish.

And that was what she was, Jane reminded herself. A matchmaker, seeking the best marriage possible for her niece. If that marriage happened to be with Lord Blackburn, well — the fates had laughed at Jane before, and she had lived. She would survive this irony, too.

“Do you have a dance reserved?” he asked.

Adorna lavished a smile on him, and with a wiggle of her shoulders, said, “How fortuitous. I have just one left.”

“Then pray give it to my friend, Fitz.” Lord Blackburn sighed as if the prospect of a country jig with a lovely maiden bored him beyond tears. “He’s a war hero, but he can probably still hobble around to a slow tune.”

Startled and offended, Jane glared at the insufferable man. Did he think to revenge himself by his petty rudeness?

For the first time, he lowered the quizzing glass. A scar marred his face, drawing the inner corner of his eye down and streaking the brown skin of his brow with white. The disfiguration was slight, yet ten years ago he had been perfect, arrogant, and thoughtless to the point of cruelty. In her heart, Jane had believed he was divine, untouchable by either emotion or injury.

“I say,” Mr. Fitzgerald was laughing in mock exasperation, “I can ask for myself.”

Incredulous at this transformation in her god, Jane turned her gaze to Mr. Fitzgerald. When she had seen that marred face, the earth had shuddered beneath her feet; had no one else felt it?

Apparently unaffected, Adorna gave a husky laugh. “Of course, Lord Blackburn. I would be pleased to dance with Mr. Fitzgerald. He is surely the handsomest man in London.” She looked at Mr. Fitzgerald from beneath weighted eyelids, while the men around them protested in hearty, disbelieving voices.

Still staggered, Jane inventoried Lord Blackburn's chiseled nose, his finely carved cheekbones, his granite chin. That face epitomized the best and finest of nobility and temperament. Yet she couldn’t ignore the proof of his vulnerability.

Nor could she ignore the character his scar added to his features, or the artistic itch in her fingers.

She sought the words to express her outrage at Lord Blackburn’s pain, to demand to know why he had put himself into danger, to beg to worship as she had worshipped before. But he was already turning away — and thank God, she was coming to her senses.

“Lord Blackburn.” Adorna's suddenly no-nonsense tone startled Jane. She sounded so much like Melba. “You, in turn, must grant me a boon.”

Blackburn halted, and his quizzing glass rose again. He gazed on Adorna as if she were a puppy who had set her teeth in his coat tails. “I must?”

“The dancing will start soon, and my aunt will be left without an escort.”

The lord and the debutante ignored her.

“You’ll care for her,” Adorna said.

Ten years ago, Jane had devoted her every waking moment to a study of Lord Blackburn. She had hung on his every word; she had deciphered his every expression.

Now she saw him look around, noting the silence which had fallen. She knew he was weighing the consequences of a contemptuous refusal. She realized he was wondering if this scene would be gossiped about, and if the names of Miss Jane Higgenbothem and Lord Blackburn would again be linked.

She saw the moment when he made his decision.

A tight smile thinned his generous lips. He bowed gracefully and extended his hand. “Escorting this … lady would be my dearest pleasure.”