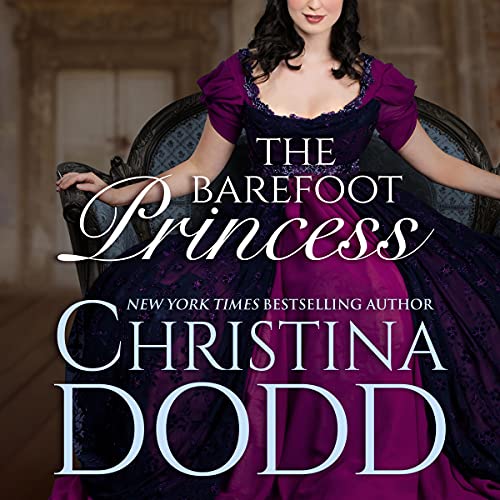 Life in exile has taught the passionate Princess Amy to hate injustice, and on the enchanted English isle of Summerwind, she finds injustice personified in the powerful and wickedly handsome Jermyn Edmondson, Marguess of Northcliff. Since he has stolen the islanders’ livelihood, Amy decides to steal him. She kidnaps the arrogant nobleman, chains him with his own manacles and holds him for ransom.

It’s a simple plan, destined to succeed. Surely Jermyn’s uncle will pay his ransom. Alas, his uncle would be delighted if someone killed his nephew and left him to inherit the title and fortune. And holding the furious, guileful, sensual Jermyn chained in her basement provides a challenge to Amy’s restraint…and her virtue.

How could such a little revenge and blackmail go so passionately wrong?

If Jermyn Edmondson, the marquess of Northcliff, had known he was about to be kidnapped, he wouldn’t have gone out on a walk — or maybe he would have. He needed some excitement in his life.

He stared toward the gray bank of fog creeping across the cresting green ocean. Far beneath his feet, the waves crashed in foamy malice against the rocks at the base of the cliff. The wind combed his hair and lifted his unbuttoned greatcoat like the wings of a black seabird. Everything here in this corner of Devon was wild, fresh and free — except for him. He was bound here. And he was bored.

In disgust, he turned away from the vista and limped toward the garden where spring crocuses had begun to poke their greenery up through the barren soil. Unless one could ride or sail — and the carriage accident he’d suffered had sharply curtailed his activities— the days were interminable, stretching endlessly, quietly, filled with long walks in the fresh air. And reading.

He glanced down at the book in his hand. He was so sick of reading. It was pride that sent him dashing away from London. He had suffered a broken leg. He hated being an invalid, and he hated more being the center of cloying attention as he recovered. When Uncle Harrison suggested Summerwind as a retreat, he had considered the idea had merit. He knew better, now.

In the gazebo, he seated himself on a cane chair and rubbed his wretched thigh. Opening his book, he allowed himself to sink into the tale of Tom Jones, a tale told when England was green and warm and youth was a joy to be savored. The rollicking adventures penned by Fielding captured him against his will, and Jermyn started when someone said, "M’lord?"

A maid-servant stood at the entrance, holding a glass on a tray, and at his consenting nod, she approached, the tray outstretched.

He noted three things. He’d never seen her before. Her blue gown was shabby. And she stared into his eyes without deference as she thrust the drink toward him.

He didn’t immediately take it. Instead he noted the girl’s fine-grained skin, so different from the tanned complexions of the local milkmaids. Her eyes were an unusual shade of green, like the sea thrashing under the influence of an oncoming storm. He’d wager she was not yet twenty, and pretty, so pretty he was surprised no farmer about had claimed her as his bride. Yet her expression was severe, almost austere. Perhaps that explained her single state.

Without being given permission, she spoke. "M’lord, you must drink. I brought it all the way out here to you! It’s wine."

She was without the manners imbued in the least of his servants. Yet she was new. Perhaps she feared trouble if he didn’t take the offering. "Very well. I’ll accept it."

She dropped a graceful curtsy and backed away, her gaze still on the glass. In her eyes he thought he glimpsed a flash of bitter resentment.

With a toss of her head, she hurried across the garden toward the shore, moving with the confident stride of a lady who commanded all around her. Jermyn would have to speak to the butler about her. She needed to be taught to promptly return to her duties … and to treat her master with the respect due him.

When she was out of sight, he took a long drink, then sputtered at the flavor. The wine was bitter! How long had this been in his cellar? Obviously, the butler had grown lax in Jermyn's absence, hiring impertinent maids and serving inferior wines. Resolving to speak to him, Jermyn went back to his book.

And blinked at the words. The page was growing dim.

He looked up and blinked again. Ah, yes. The sun was setting and fog encroaching on the land, bringing with it the gloom that seemed to brood endlessly over a Devon winter.

How odd that his boyhood memories of this place were so different. He remembered long days of sunshine, filled with walks accompanied by his father or romps with visiting friends. Such memories were evidently the fond recollections of a boyhood long vanished.

The bitter wine had stimulated his thirst, and reluctantly, he took another swallow. The texture was almost gritty, the flavor foul, and with disgust he tossed the remnants into the rhododendrons around the gazebo.

He found himself sweating. Had a wave of heat struck the garden? Digging his handkerchief out of his pocket, he blotted his face, then shed his greatcoat in a graceless act. Looking back at the open book, he discovered the letters moving erratically. The light was going faster than he had realized, or the words wouldn’t behave so badly. He tried to slap the book shut. The book flipped out of his suddenly clumsy fingers. His tongue grew large in his mouth. He lifted his head so he could stare across the garden, but the motion took a long time. The fog was creeping up from the ground, blurring his vision.

Or was it wine which made everything fuzzy?

An startling conviction struck him. He staggered to his feet and stood swaying. The wine had been poisoned.

When his carriage had lost its wheel and he’d careened off the road between London and Brighton, he had thought he was going to die. But this … this was more insidious, more …

The floor wavered and rose defiantly beneath his feet. He toppled over. landing with a crash that reverberated the boards and made him distantly aware of the impact on his injured leg. "Help," he tried to shout. He heard people calling, running …

Aid was on its way.

Jermyn pried open his eyes. A huge pair of battered boots stood planted in front of his nose. With a mighty effort, he turned his head and looked past the thighs, past the belt, and far, far up toward the blunt, heavy face. A behemoth stood over him, a rough man with huge hands and a grim expression. This wasn’t help. This was danger.

Then Jermyn saw the girl standing beside the huge man. A girl with a direct green gaze that seemed to scorch him down to his soul. She wore a blue, tattered gown. He’d seen her once before.

"He’s looking at us," the giant’s voice rumbled. "Why isn’t he knocked fer kindlin’?"

"He probably didn’t drink it all," the girl answered. "Wrap him up. Let’s finish this before someone comes to check on him."

She pulled out a knife with a blade so bright and sharp he could see nothing but the point.

Jermyn wanted to fight, but he couldn’t lift his heavy limbs. He tried to curse, but his mouth would not speak.

Taking a sheet of white paper from her bosom, she placed it on the table beside his book and affixed it to the flat surface with a swift, downward slash.

The giant shook out a white canvas shroud.

These people, these murderers were speaking, yet Jermyn could no longer pluck words from the gibberish of sound. His heart beat sluggishly. His blood slowed in his veins. Death was approaching. He closed his eyes one last time.

He had been murdered in his own garden.