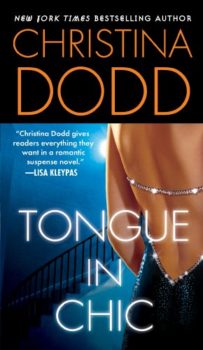 Devlin Fitzwilliam caught Meadow Szarvas red-handed, breaking into his mansion to steal a painting. In sheer desperation, she used a case of amnesia as her excuse. But then he pulled a fast one—and claimed she was his wife. Playing along was the only way for Meadow to get her hands on that painting. But what she doesn’t realize is that Devlin has a hidden agenda too—and that someone’s keeping an eye on them both.

What are you looking for in a romance? A rich, powerful man? A smart, witty woman? The clash of cultures amid the meeting of two minds? Amnesia? Yeah, me, too. I’m a sucker for an amnesia book, and while I love the traditional version, I also love to twist the story to give it that Christina Dodd touch.

On the South Carolina Coast

Lightning flashed. Shadows of bare limbs clawed the tangled path, and the lithe, black-clad trespasser stumbled. Paused. Shuddered. Then continued toward the Victorian house set high above the ocean. The roar of thunder shook the ground, and the next flash of lightning followed hard on its heels, blistering the massive structure with harsh white light. The spires on the fourth-story cupola stabbed at the roiling clouds, the wind gauge spun wildly, and on the beach, the waves growled and pounded.

The figure ran lightly up the steps and toward the imposing double doors. The large silver key slid neatly into the lock. It turned easily and was once again pocketed. One black glove-encased hand rested on the beveled glass, then pressed. Without a sound, the door swung open. No lamp lit the interior, but the intruder confidently strode into the foyer.

The lightning struck again, blasting away the shadows. Thunder boomed. The figure halted and spun in a circle.

The wide hall soared two stories above the floor. Gold blazed off every picture frame, every finial, off the coved ceiling. Stern eyes watched from nineteenth century portraits and wide stairs stretched up and out of sight. Then the lightning was gone. Silence settled like dust in the house.

The intruder crept toward the second entrance on the left. Each step fell soft and sure on the wide, custom-woven rug, headed in a straight line for the cozy sitting area. The figure halted behind one of the chairs and stared up at the painting over the fireplace. The beam of a tiny flashlight flicked on and scanned the wall, once, twice. “Oh, Grandmother. You promised. You promised. Where …?”

The overhead light flared. A man’s deep, Southern voice demanded, “What are you doing here?”

A tall, dark-haired man stood in the doorway, his hand on the light switch.

He was the most striking, arrogant, handsome man Natalie Meadow Szarvas had ever seen. She tried to run. Her feet tangled in the fringe of the rug. She tripped, grabbed for support, missed. Hit the floor — hard.

When the stars had ceased sparking behind her closed eyelids, she took a long, trembling breath. Her head … her head really hurt. She lifted her hand to touch the pain at her temple.

The man. The one with the contemptuous eyes. How had he managed to get from the door to her side?

“Sir, should I call the police?” Another man. Eager. Quiet. Efficient.

“Call the doctor.” Mr. Arrogant pressed something soft to her forehead.

She winced and tried to flinch away.

“Leave it,” he instructed. “You’re bleeding on the rug.”

“Okay,” she muttered. Wouldn’t want to bleed on the freaking expensive rug.

She must be mistaken. This couldn’t be the handsome one. A guy who used a tone that rude to a girl sprawled bleeding on his floor couldn’t be attractive. She looked up at him.

He looked back at her, a cool, assessing stare.

Her heart stopped. Her breath stopped. She was immobile. Because she was right about one thing. He wasn’t handsome — he was harsh, breathtaking, his glance striking like lightning and leaving her dead. And what a way to go. If this was her punishment for trying to steal a priceless painting, then burglary had just become her way of life. “Wow,” she said again.

Mr. Arrogant sat on his heels beside her. He wore a rumpled, white starched shirt with the cuffs rolled up.

And a pair of blue jeans that caressed his thighs.

Obviously the jeans were female.

He held Meadow’s wrist in one hand, and pressed a swathe of white to her forehead with the other, framing her in his arms, sheltering her with his shoulders.

Her heart jumped into a frenzy of action.

“Who are you?” he demanded. “What are you doing here?”

“Here?” She lifted her head and tried to look around. The instantaneous headache and nausea made her relax back against the floor, close her eyes and mutter, “I’m going to barf.”

Gently he placed her hand on the cloth on her head. She heard sounds — him standing, moving away, coming back. “If you must, here’s a basin.”

She opened her eyes the smallest chink and looked.

He held a etched glass vase with gold decoration, absolutely exquisite, done in the regeletto design.

Aghast, she asked, “Are you insane? That’s a Honesdale vase, an original. I can’t barf in that!”

For a second, the merest twitch of an eye, she thought she saw amusement.

But no. Mr. Arrogant was as forbidding as ever when he said, “Of course. Pardon me. I lost my head.” He glanced around him. “Can you barf in a Limoges bowl?”

“So who are you?” Mr. Arrogant slid the dark cap off her head — and smiled as her hair tumbled free.

She had more composure now, no desire to explain her mission, and a few questions of her own. “Who are you?”

“I’m Devlin Fitzwilliam. I live here. I own this house. The one you broke into.”

“You own Waldemar?” She struggled to comprehend the incomprehensible. “What about the other guy…? The one who used to own it?”

“I, um, don’t know.” She hadn’t prepared for this conversation. She had planned to break in, grab the painting and depart, not talk to a guy whose ruthless eyes demanded the truth and whose lips carried on a dialogue all of their own.

“Bradley Benjamin the third sold me the house,” Devlin said.

“Oh.” Grandmother was wrong. So wrong. Bradley Benjamin had sold the house. This stranger did live here. The painting was not in its place. And Meadow was in deep, deep trouble. “I’m … Meadow.” Not Natalie Szarvas. That was her professional name and if he knew that, she didn’t stand a chance of getting out of this mess. “I don’t … I can’t ….” How stupid was this? She should have considered that she might get caught. Prepared some kind of story.

But Grandmother had been so sure … and now some guy with cold eyes and warm lips kissed her fingers and cross-examined her, and soon she’d find herself on the way to jail. How was she going to explain that to her parents living in the small town of Blythe, Washington, when they thought she was teaching a glass-blowing seminar in Atlanta?

His lips, not his questions.

“That’s right. I don’t remember. Because I … I … I have amnesia!” Good one, Meadow! That’s thinking on your feet!

Lightning struck nearby. Thunder boomed. Meadow jumped. It was as if God Himself called her a liar.

“When you didn’t recognize me at once, I was afraid of this.” Devlin gazed into her eyes so soulfully she didn’t dare blink.

“Huh?” She had a bad feeling about this.

Tenderly he gathered her into his arms. “My darling, I know you don’t remember — but you’re my wife.”