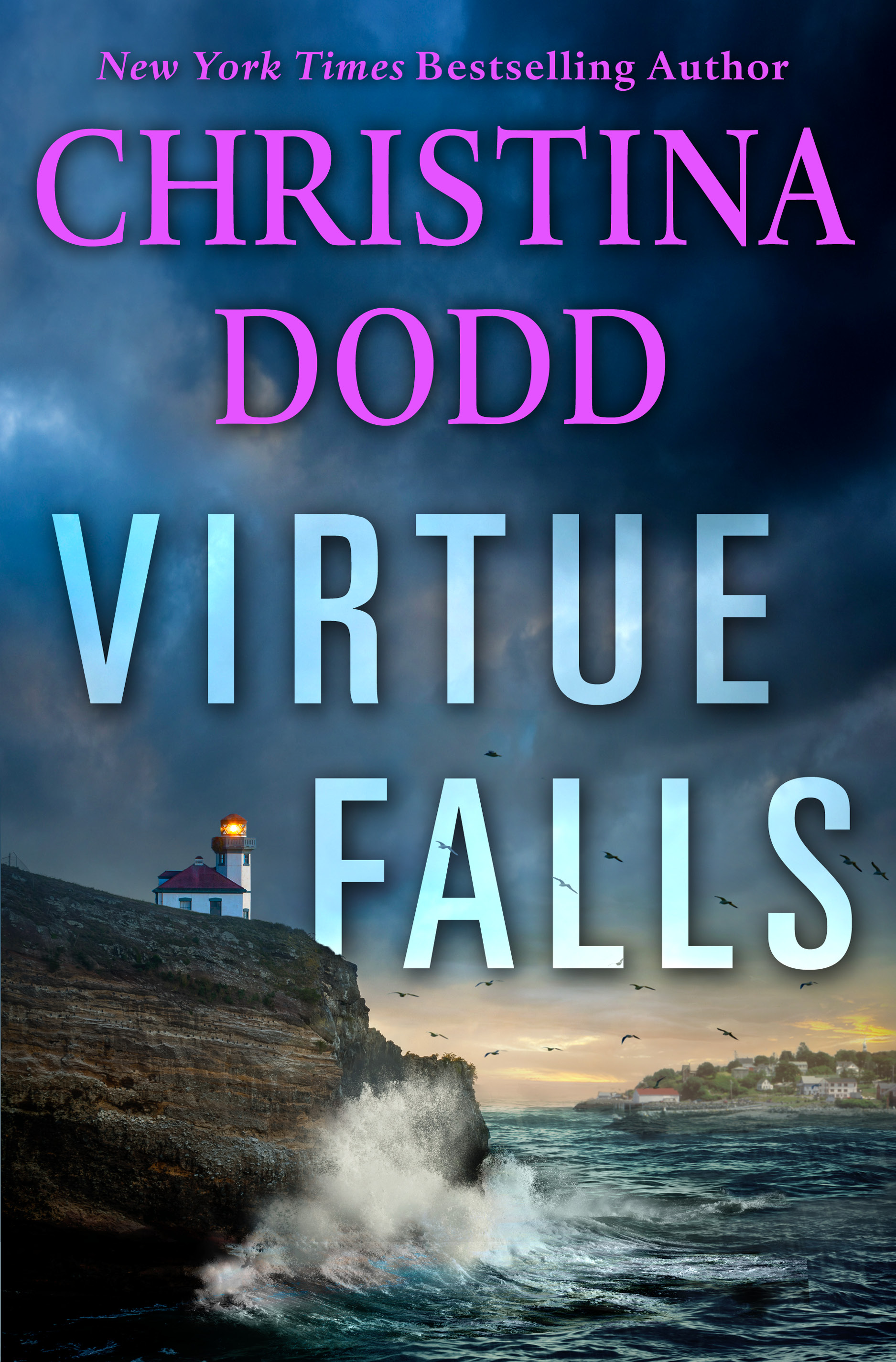 You can order VIRTUE FALLS, at these online retailers:

Twenty-three years ago, in the isolated town of Virtue Falls, Washington, four-year-old Elizabeth Banner witnessed her mother’s brutal murder. Elizabeth’s father was convicted of killing Misty and sentenced to prison. Now Elizabeth is back in Virtue Falls, her life guided by logic and facts. But nothing can help her through the emotional chaos that follows the return of her ex-husband, Garik Jacobsen, an FBI agent on probation and tortured by the guilt of his past deeds. Nor can it help her deal with her father, now stricken with Alzheimer’s and haunted by Misty’s ghost. When a massive earthquake reveals long-concealed secrets, Elizabeth discovers her father is innocent. Is the killer still at large, stalking ever closer to the one witness to Misty’s murder? To Elizabeth herself? Elizabeth and Garik investigate, stirring old dark and deadly resentments that could provoke another bloody murder— Elizabeth’s own.

FREE! Listen to the first chapter of VIRTUE FALLS!

Click on this link to listen or right-click (and select “save link as”) to download the first chapter.

If Elizabeth Banner noticed the interest with which the townspeople watched and talked about her in low tones behind her back, she gave no indication. And in fact, she didn’t notice. For as long as she could remember, she had always been the girl who had watched her father kill her mother with the scissors.

Although she hadn’t set foot in Virtue Falls for twenty-three years, the memory of Misty Banner’s murder was still fresh in many people’s minds. That made Elizabeth a local celebrity of sorts, and the news of her return swept the small community as vigorously as the tsunami those crazy scientists were always predicting.

Townsfolk speculated that Elizabeth had come back to reunite with her father, but after one brief visit to the Honor Mountain Memory Care Facility, she hadn’t gone back. Instead she spent her time at the ongoing study of Pacific Rim tectonic plates and subduction zones, researching alluvial deposits.

Which made sense — her father was Charles Banner, the man who had pioneered the study, and now here she was, a chip off the old block, a respected geologist at age twenty-seven with lots of official-sounding letters after her name.

A few nasty people in the town darkly muttered that they hoped she didn’t follow in her father’s footsteps in any matter beyond the sciences.

Most folks didn’t think she would; Elizabeth resembled her mother, not her father, with the same white-blonde hair, the same wide blue eyes, the same curvy body and a walk to make a man abandon all sense.

Every straight guy in Virtue Falls had tried to catch her attention; she stared at them blankly, and talked about igneous rocks and cataclysmic earth events until even the most determined would-be lover conceded defeat.

Her online profile said she was divorced.

Most men said they knew why; she was boring.

Perversely, most men considered the guy who had let Elizabeth Banner get away to be the biggest dumbshit in the history of the world. It didn’t matter what she said. It was the way her full lips formed the words when she said them.

Now she sat at her usual table by the window at the Oceanview Café — when she first arrived, she had noted with interest that the ocean was nowhere in view from this part of town — reviewing her notes from the dig and occasionally sipping on a Fufu Berry Jones soda and wondering why she had ordered it.

She thought she had ordered a root beer. And what was a fufu berry, anyway? Something pink…

“Here you go, Elizabeth.” The waitress slid a plate under Elizabeth's elbow. “Eat up while it’s hot.”

Elizabeth had finished work at the dig, gone home and showered, and changed into her brand-new Tory Burch sandals and her baby blue cotton jersey summer dress that was one size too big. She wore it like that on purpose. If she didn’t, men had a tendency to stare at her boobs.

Well. Men had a tendency to stare at her boobs no matter what, but when she wore loose-fitting clothes, they were sometimes able to meet her eyes.

Rainbow wiped her hands on her apron. “Are you missing your team?”

Elizabeth paused, a fry halfway from the ketchup to her mouth. “Why would I?”

“They’ve been gone for three days to that conference in Tahoe, and you’ve been working alone at the site. Three days in that isolated canyon with no one to talk to … don’t you get lonely?”

“No.” Elizabeth shook her head for emphasis. “At any rate, the team will soon be back covered with accolades for their research. Andrew is a very capable, if not brilliant, scientific leader.”

“I don’t know that I would tell him he’s not brilliant,” Rainbow said.

“He knows that, or he wouldn’t lean so heavily on the intuitive suggestions of others.” With great precision, Elizabeth spread mustard to the edges of the homemade bun.

“Trust me on this one, honey. There’s a world of difference between knowing it and admitting it, and Andrew Marrero is already touchy about the fact he worked for your father and stands in his shadow.”

Elizabeth considered that. “Yes. I have read my father’s work. Charles Banner was, in fact, a gifted scientist, and I say that without prejudice of any kind. But why that would influence Marrero’s opinion of himself, I do not understand.”

Rainbow sighed. “Okay, look. Marrero is a good-looking son-of-a-bitch. Dark hair, dark eyes, swarthy skin, the image of a Latin lover. But he’s short. He says five-nine, but he’s five-seven, maybe five-eight. Maybe. He’s well hung, but he can’t tell everybody that, so he wears lifts in his shoes. Short guys just have this attitude.”

Elizabeth was fascinated with this unsuspected side of Rainbow. “So you’ve slept with Andrew Marrero?”

“He’s not my usual type, but it was interesting. I used to put him on and spin him.” Rainbow’s eyes half-closed in satisfied remembrance.

Elizabeth blurted, “I thought you were…” She stopped herself barely in time.

So … not barely in time.

“Hey, when you’re bi, you double your chance for a date on Saturday night.” Rainbow chortled, patted Elizabeth's arm and headed toward the lunch counter.

Elizabeth sank her teeth into the burger while she watched Rainbow charm three sunburned tourists who chattered with great excitement about their day at the beach.

Rainbow had apparently been the waitress here at the Oceanview when Elizabeth was a child. Twenty-three years later she was still the waitress, a fate Elizabeth considered worse than death. Of course, she couldn’t even remember whether she’d ordered a root beer or a fufu berry soda, so that was part of it, but being around people all day filled her with horror.

She didn’t like people. In her experience, most of them were spiteful, or thoughtless, or cruelly curious, and always, always impatient with her lack of interest in them.

But Rainbow interested her, because Rainbow seemed to be an entirely different species of human. For one thing, Rainbow was tall, with big bones, broad shoulders and a headful of salt-and-pepper gray hair. She was hearty, cheerful, and she seemed honestly fascinated by her customers, tourist or local, always chatting, asking questions, giving unwanted advice.

At first Elizabeth hadn’t known what to do with her; every time Rainbow came to the table she would tell Elizabeth stuff. Stuff Elizabeth didn’t want to hear because it distracted her from her work.

But Rainbow never needed an invitation to talk. The first time Elizabeth came in for dinner, Rainbow told her, “A lot of people think my name is unfortunate for a woman my age. You know — I was born in sixty-eight in Haight-Ashbury, after the Summer of Love.” She paused and seemed to be waiting for something.

Elizabeth belatedly picked up her cue. “Your parents were hippies?”

“Hippies? God, yes. The original hash-smoking, psychedelic-music-playing, free-love-practicing hippies.” Rainbow shook her head like a disapproving mom. “Still are, for that matter. After I was born, they decided the city wasn’t a good place to raise a baby, so they went into the Sierra Nevadas and learned weaving from a Native American woman who’d learned techniques from her great-grandmother. They’re pretty good at it. You’ve probably heard of them.”

“They’ve got one of the temporary exhibits in the Metropolitan Museum of Art in New York. My parents are Alder and Elf Breezewing.”

Elizabeth's head was spinning. “Which one is Alder and which is Elf?”

Rainbow put her broad hands on her broad hips. “You really don’t know a damned thing about anything except rocks, do you?”

“That is not true. I also understand alluvial deposits and am studying the recently-mapped ocean floor off the coast of Virtue Falls for an understanding of why tsunamis are so massive in this area.” Elizabeth thought it an intelligent answer.

Rainbow stared at her as if she was speaking a foreign language. “Right. You’re like your father. I’ll get your dinner. I had the cook put an extra order of fries on the plate.”

Elizabeth wanted to ask what she meant about her father. Had Rainbow known him when they lived here?

But Elizabeth had learned, the hard way, never to talk about Charles, so instead she asked, “I asked for mashed potatoes. Didn’t I?”

“They’re coming, too. You need fattening up.”

Elizabeth knew for a fact she didn’t need fattening up. She was curvy. Very curvy. For a girl growing up in California, land of the svelte, being built like her was a disadvantage, not to mention it was hard to find clothes. If pants fit her hips, they were loose around her waist, and she hadn’t worn a button-up shirt since she was eleven and developed a C cup. Her aunt said she was built like her mom. Her uncle said she was built like an exotic dancer. But he didn’t realize she’d heard him, so she would acquit him of malice. Her uncle wasn’t mean; he was overworked and didn’t have time for his own kids, much less a niece who never talked much even after she recovered her power of speech.

Elizabeth realized she had a bit of a disconnect from the rest of the world caused by the knowledge that humanity could turn on her in an instant. She recognized the fact she sabotaged her own relationships, and sometimes she really tried to join in with the general populace and talk about the weather. She just never got it right. Not even with Garik.

Especially not with Garik.

Best not to think of Garik.

She bent her head to her reports again, and didn’t notice when one of the town’s elderly inhabitants held court in the corner, pointed her out to the tourists, and regaled them with the tale of how Elizabeth Banner had seen her father kill her mother with a pair of scissors.