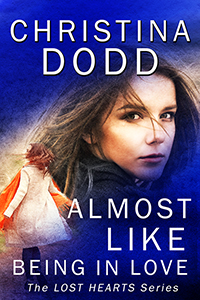 You can order ALMOST LIKE BEING IN LOVE: Lost Hearts #2, at these online retailers:

Witness to a brutal murder, Pepper Prescott flees a killer, leaving her home, her business, and the false identity she’s spent years cultivating. She runs to the only place she’s ever felt safe—the small mountain town of Diamond, Idaho, where she met the boy who had captured her heart, and taught her body to love…until she turned her back on him in anguish and shame, leaving him without a backward glance.

The moment she sees Dan Graham, sweet passion flares again. But Dan’s service in the Special Forces has left him wounded, body and soul, and harboring a dangerous secret that could get both he and Pepper killed. In order to save their lives, they must learn to trust each other as they never had before … before it’s too late.

Enjoy ALMOST LIKE BEING IN LOVE Lost Hearts #2 in ebook with bonus material on Kindle, Nook, Kobo and iTunes!

Enjoy all three Lost Hearts books, JUST THE WAY YOU ARE, ALMOST LIKE BEING IN LOVE and CLOSE TO YOU in ebook with bonus material, as well as GABRIEL’S GIFT: a Lost Hearts Christmas epilogue!