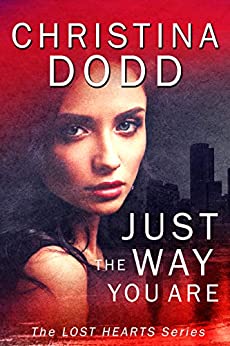 Just the Way You Are

Hope Prescott lives in Boston, far from the warm, southern home she recalls. She works hard with one goal in mind—finding her long-lost siblings. Yet her job at the answering service and her own loving nature creates a family of friends, people she knows only by their voices. She especially likes Griswald, gruff old butler for wealthy Zack Givens.

Meeting Griswald is a shock; he is neither gruff nor old, but a powerful, handsome man. In fact, he is Zack Givens, cold, heartless—and charmed by the artless young woman who brings him chicken soup, treats him like a friend…and falls in love with the humble man she imagines him to be. When she discovers Zack’s secret and faces his betrayal, she leaves without a backward glance. Can Zack solve the mystery that haunts Hope’s past to prove their futures lie together? 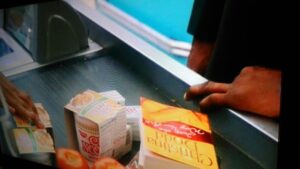 Fun fact—in the movie The Manchurian Candidate, Denzel Washington buys a copy of JUST THE WAY YOU ARE.(original cover)

When I got the idea for a family ripped apart by tragedy and trying desperately to reunite, I knew the time had come to write my first contemporary romantic suspense series, Lost Hearts. JUST THE WAY YOU ARE is book #1 of the Lost Hearts series. This edition of JUST THE WAY YOU ARE Enhanced with bonus material includes the plotting synopsis and a previously unpublished first chapter, with author commentary.

Zack Givens hurried into the house and said to his butler, "I need to call my answering service." Going to his office, he strolled to the phone on his cherrywood desk. Oddly enough, he’d wanted to be alone when he listened to that woman’s voice again. Hope's voice. This afternoon, when he’d heard her, he had thought she sounded warm and passionate, like fragrant nights on a tropical island, like lustrous pearls against a smooth, pale throat … like a woman in the throes of arousal. When he had heard that voice, a shiver had worked down his spine, and … This was stupid. He was hallucinating about someone who worked at his answering service. He punched in the number.

"This is Hope. Are you calling for Mr. Givens’s messages?"

What a voice! Friendly, husky, and so sexy. He took a long breath to slow the sudden thump of his heart. Amused at this infatuation with an unknown woman, he built a picture of her in his mind. Hope probably sported broad, capable, child-bearing hips. Her hair was long and white, swept into a bun, and when she wasn’t answering the phone she was making spaghetti for her husband and her legion of grandchildren. Zack’s portrait of Hope added a measure of sanity to an obsession that was otherwise pure madness. "I am calling for Mr. Givens’s messages."

In an instant, Hope was gone. He didn’t even get music, only the occasional beep that told him he was on hold. Picking up a pencil, he tapped it in beat of syncopated impatience. He wasn’t feeling so infatuated with her now.

Hope clicked back in. "She’s not there."

"I’m here," he announced in a significant tone.

"Yes, but you don’t have any real problems. Mrs. Monahan needs an artificial hip and she can’t afford it."

He didn't care. He just didn’t care about some old lady whose only connection to him was a female with an overdeveloped sense of responsibility toward the elderly.

"Her arthritis, you know," Hope said. "She hobbles on a cane. She needs a walker, but she won’t let me get her one. I know I could track down a used one for almost nothing."

"Yes." He cleared his throat. What did he know about used walkers? "What about her family? Shouldn’t they be worried about this so you could give me my messages?"

"She doesn’t have a family. A lot of old people don’t."

Now that was a situation he couldn’t imagine. His family was always there for him … whether he wanted them or not. "My aunt had a hip replacement two months ago." Conversation. He was making conversation with the answering service lady. His friends would be so proud.

Hope's voice grew more concerned. "How is she?" So Hope felt compassion, not only the people she served, but for anyone she ever heard about.

This answering service was a disaster. If he had an answering machine, he’d already have retrieved his messages. "She still has trouble getting around."

"She’s my father’s youngest sister, and except for the arthritis, she’s a real live wire. So yes, she is my favorite." Why was he telling this woman, this stranger, these things? He made his tone stern. "I’ll take those messages now."

Hope responded as she should … finally. "Of course, sir — wait a minute! There she is."

He was back on hold again, listening to that obnoxious beep. This woman was incredibly inefficient, operating without any sense of decorum or any understanding of his importance.

The line snapped back on. "Mrs. Monahan is fine, but she was shoveling her walk. I told her if she fell down she’d be freeze to death. For Pete’s sake, she’s eighty."

For Pete’s sake? He hadn’t heard anyone say that for years. So Hope really wasn’t the sensual young thing her voice suggested. He was relieved. He really was.

"Are you Mr. Griswald? You’re Mr. Givens’s butler, right?" Hope’s voice warmed with amusement. "You have to be. I can’t believe the old fart keeps a male secretary at home. Oops, there’s Mr. Cello. Hold, please."

She came back on almost immediately. "He’s waiting for news on his student loans. If he doesn’t get scholarships, he has to wait tables again this semester."

Zack swore he only understood every other word she spoke. "His name is Cello?"

"No, that’s the instrument he plays." Hope sounded impossibly cheerful. "I have nicknames for my clients. There’s Ms. Siamese."

"Yes, if I was talking about her. It’s her cat, it yowls all the time she’s on the phone."

"Oh." Politically incorrect? This was appalling. Hope had no business knowing so much about her callers. She truly had no business telling him about them, although she hadn't told him any names. And she should never, ever care so much.

"There’s poor Mrs. Chess. She’s got a baby, her husband took off, and she’s living on welfare because if she gets a job she can’t pay for the child care and survive. She and I play chess over the phone. She’s lonely." Hope sounded wistful, as if she were lonely. "It keeps her entertained."

Zack was reeling. "How is she paying for the answering service?"

"It’s illegal to charge one man more for the services he receives than anyone else."

"Mr. Givens is receiving more services. I’m keeping a permanent log of every call he receives, plus I’m to keep track of Mr. Givens’s appointments, plus I’m to send flowers and jewelry as instructed by Mr. Givens should he need to stage a seduction. Somebody has to take care of the big man’s seductions. You can’t expect him to stage them himself." Hope mocked him — Zack Givens — with words and tone.

"You don’t seem to have much of an opinion of Mr. Givens. What’s he done to you?"

"Nothing." She chuckled huskily. "He’s just rich. Born and bred to it. When it comes to the milk of human kindness, those kind of people are a dry cow."

He had never heard himself described as a dry cow before…

JUST THE WAY YOU ARE won the Waldenbooks Award for Bestselling Romantic Suspense!

All three Lost Hearts books, JUST THE WAY YOU ARE, ALMOST LIKE BEING IN LOVE and CLOSE TO YOU are now published in ebook with bonus material.