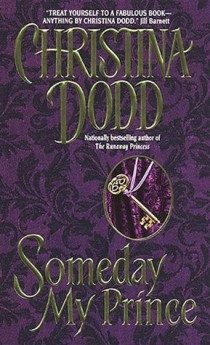 You can order SOMEDAY MY PRINCE: Princesses #2, at these online retailers:

The Princess Must Marry
Princess Laurentia leads a fairy-tale life, attending glittering balls and wearing beautiful gowns. But after the ball is over, Laurentia finds herself getting into bed…alone. She dutifully agrees to choose a husband, but when she casts her eyes over her sea of suitors, she doesn’t see a single man worthy enough to claim her.

Who Will She Choose?
She is swept off her feet by Prince Dominick, soldier of fortune, black sheep of his family…and the man hired to protect her. He’s brazen enough to steal her kisses, yet tender enough to soothe her with one touch. He makes no promises, speaks no vows of forever and hides a dark deception…yet Laurentia can’t help but hope that her prince has finally arrived.

I love bad boy heroes, those men who don't hesitate to go after what they want. And what they want, of course, is the heroine. Dom is the ultimate bad boy hero. He was the villain of THE RUNAWAY PRINCESS, a bastard raised in a whorehouse who led the rebellion against his brother the king. But years have passed, he's learned some hard lessons working as a mercenary and if he met a good woman, she could reform him. Of course, that good woman is going to need to kick his butt occasionally …

Princess Laurentia leaned on the balustrade of the palace terrace and listened to the sounds of the night. Doors opened around the far corner, and the music from the ballroom spilled out. Perhaps it was getting warm inside, or perhaps lovers sought the darkness, there to perform the rituals of courtship. She had no way of knowing what occurred in those brief moments, yet she thought it would be pleasant if any man ever concentrated on her instead of her kingdom.

The door behind her opened. For one moment, she thought her prayer had been answered. Then she realized she had been found by one of the suitors or by her father the king. Turning, she faced the lone man silhouetted against the glass doors.

"Your Highness?" A foreign twang accented his voice, and he wore the royal livery.

Puzzled, she studied him. She had never met him. "Yes?"

Steadily, he walked toward her, a bulky man who strained his jacket and smelled of sweat. His beefy hands reached out for her; she tried to sidestep as she sputtered, "What do you think you're doing?"

Grabbing her around the waist, he hefted her onto his shoulder.

Laurentia hung there, immobilized by shock. It wasn't until he put his foot on the balustrade and started to leap into the garden that she gave a shriek and grabbed for his hair.

It came off in her hands, a musty wig. She shrieked again and thumped him on the spine. That knocked him off-balance, and he rocked backward, flailing his arms. She thumped again and threw herself sideways. She flew through the air and hit the marble floor, cracking her elbow. The thug fell on top of her. Something — someone — landed on top of them both.

The Someone knocked the knave off her. Released from the crushing weight, she gasped for breath, strained to hear through the ringing in her ears. In the distance, yet far too close, she heard the crack of bone against flesh. Feet pounded along the terrace; stupidly, all she could think was that she couldn't be caught with her clothes rumpled and her dignity compromised. Sitting up, she swayed as she glanced around.

It was her attacker and her rescuer whose footsteps she heard. The two men raced along the terrace, going deeper into the shadows. The one in the lead leaped over the balustrade. The second drew back. The land dropped away there, and only a desperate man would dare the leap.

"Coward," she muttered. That was unfair, but her ribs ached and her elbow hurt and she was the princess and she didn't have to be fair. Not when she had just been attacked by some smelly beast and only one of her supposedly eager suitors had come to her aid.

Her rescuer limped back toward her — limped, oh, fine, he was injured and required compassion when she had none to spend — another broad-shouldered fellow. As he crossed through the light coming from the windows, he seemed more phantom than man. She strained to behold his face, but could see only dark hair, eyes deep set above a craggy nose, and lips pressed tightly together.

When he came within speaking distance, he demanded, in a tone quite unlike any she normally heard, "What the hell was that about?"

Astonished and in pain, she stammered, "Who … what … how dare you?"

"Was he a suitor scorned?"

"I never saw him before!"

"Then next time a stranger grabs you and slams you over his shoulder, you squeal like a stuck pig."

Clutching her elbow, she staggered to her feet. "I yelled!"

"I barely heard you." He stood in front of her, taller than he had at first appeared, beetle-browed, his eyes dark hollows, his face marked with a deep-shadowed scar. "And I was just behind those pots."

Tall and luxuriant, the potted plants clustered against the wall, and she looked at them, then looked back at him. He spoke with an accent. He walked with a limp. He was a stranger. Suspicion stirred in her. "What were you doing there?"

She smelled it on him, that faint scent of tobacco. "I'll call the guard."

"Don't bother. He's long gone." The stranger examined her features impersonally, and in a kinder tone asked, "Are you hurt?"

He clasped her wrist and slowly stretched out her injured arm. He unfastened the buttons on her elbow length glove and stripped it away, then ran his bare fingers firmly over the bones in her lower arm and lightly over the pit of her elbow.

Goosebumps rose on her skin at the touch. He didn't wear gloves, she noted absently. His naked skin touched hers. "What kind of injury are you looking for?"

"Not an injury. I just thought I would enjoy caressing that baby-soft skin."

She jerked her wrist away.

She snatched her glove back and pulled it on, and found she had trouble thrusting her fingers into each proper cavity. They trembled, as did her voice. "I don't know why anyone would … that is, what he was …"

"Aren't you the princess?"

Her heart gave an irregular thump. Wariness returned in a rush, and she took one edgy step away. "Yes."

"Then I'd have to say it was a kidnapping attempt."

She stared at the stranger blankly, straining to see through the darkness at the possessor of that inscrutable voice. "That's absurd!"

"Hardly. You're the only heir to a quite wealthy little kingdom. I imagine your father would pay a fortune to have you back. I'm surprised no one's tried before."

He made her feel stupid and naïve. "We're at peace here --"

"One bad apple, and all that. But he did get away, and if he's desperate enough, he’ll try again. Or there might be more than one of them. Consider hiring a bodyguard."

Who did the man think he was? He should be hinting for a reward, not giving unsolicited advice. "Who are you?"

"Dominic of Baminia — call me 'Dom.'" He strolled to the tall potted plant and dug his cigar out of the soil where he'd tossed it. "I'm one of your suitors."

She was shaken, but she hadn't lost her wits. "You were not presented."

"There's no cozening you, is there?" The cigar still smoldered, and he knocked the dirt off and placed the end in his mouth. Lifting his head, he puffed until the end glowed red and smoke eased from between his lips. "I didn't get here in time."

He was rude, he was crude, and he spoke so offhandedly, every hackle rose. "If you want to court a princess, it seems worthwhile to cultivate punctuality."

"Punctuality." He mocked her patrician accent. "Actually, I didn't see the sense of it. You're not going to marry me."

She wasn't, of course, but it annoyed her that he was so sure. "And why not?"

"I am the brother of the king of Sereminia."

Startled, she searched her memory. The brother of the king of Sereminia? She couldn't remember a brother. "That's not a bad connection. We share our northwest border with Sereminia --"

"There are other bastards here."

"They don't stand a chance, either." Crossing to the wide marble railing, he sat on it. "Do they?"

He wouldn't get such an admission out of her. "As much of a chance as any."

"Ah, then you've made your choice. Who's the lucky legshackle?"

She didn't have to stay out here with this cynical brute. She should go in and report the incident to her father. But she found herself several steps closer. "I haven't picked anyone.”

He continued as if she hadn't spoken. “I would say it was that fellow … who is he? … the tall one with the pompous streak wide as the sea."

She caught her breath on a chuckle. He'd hooked Francis precisely!

Her amusement died. "Is that the gossip?"

“Speculation ran rampant with every swain who took you in his arms. Especially among the debutantes. They're not crazy about you, you know. The sooner you're married, the happier this year's crop of maidens will be." He tapped the cigar on the edge of the railing. "They don't like playing cat's paw to a woman of your advanced years."

Her head swam oddly, as if she'd been underwater and out of air for too long. "I suppose not."

"Although you're holding up well for a woman of twenty-five. Quite pretty, actually. Is your hair really that color?"

"You are a boor!" she exclaimed, but again she found herself swallowing a laugh.

Recovering her wit, she said, "You have to admit, it is natural-looking."

"Not really. Not many women really have hair of ebony and skin white as snow, as the old fairy tale says. Lemon juice on the complexion?"

He was right about that, at least. "I find it helps bleach out the freckles."

"I have always thought that must be true." She poked at the hairpins holding her coiffure in position. "Men have all the advantages. They get to scratch where it itches, stride about in clomping boots, and let loose with any body function they see fit."

"Most important, we have these … inappropriate reactions to ladies even when we know they dye their hair."

Her hands froze, her eyes widened. Confused, her mind in turmoil, she stared forward, her eyes aching with the strain of never blinking. In his careless, unrefined way, was he calling her attractive?

"If I promise not to belch too loudly, may I see you into supper?"