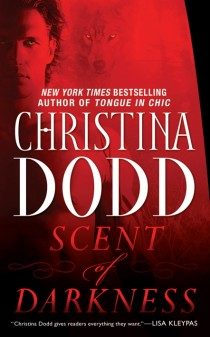 You can order SCENT OF DARKNESS: Darkness Chosen #1, at these online retailers:

A thousand years ago, a brutal warrior roamed the Russian steppes. Driven by his craving for power, Konstantine struck a terrible bargain. In return for the ability to change at will into a cold-hearted predator, he promised his soul, and the souls of his descendants, to the devil. Then one day a dangerous prophecy reveals the truth: one family has been chosen to battle the darkness — or face damnation.

Plain Ann Smith loves her handsome, dynamic boss, Jasha Wilder, but her daring plan to seduce him goes awry when she encounters a powerful wolf who, before her horrified eyes, changes into the man she adores. She flees, he pursues, but they can’t escape their destinies. For Jasha is Konstantine’s descendant and Ann is the woman fated to break the curse that binds his soul. To find heaven in each other’s arms, they have the devil to pay.

If you’re not already a newsletter friend, what are you waiting for? I’d love to welcome you! You’ll enjoy book updates, book sales, surveys, and humorous insights to the writing life. Join!

SCENT OF DARKNESS was the very first paranormal I wrote, and into it I poured every dream, every fantasy, every wicked nighttime imagining of powerful shapeshifters, thousand-year-old pacts with the devil, and the Wilders, a family who traveled from the Ukraine to the USA to escape evil. Yet fate finds them and uses them for a special purpose.

SCENT OF DARKNESS is book one of the Darkness Chosen series.

TODAY ON THE WASHINGTON COAST

Ann had broken into her boss’s house. She’d showered, she’d donned her slinkiest gown, and now, at last, she was going to seduce Jasha Wilder — if he managed to make his way home through this unpredictable tempest that trapped her here.

She stared at herself in the mirror. How could she look so good, yet feel so much like the Cowardly Lion?

Okay. She was going to go to the great room, get a glass of wine, pose artfully in front of the fire, and wait for Jasha to show up. She could do it. All she had to do was walk downstairs …

Above the battering of the storm, she heard a blast of sound from outside.

A gunshot? Running to the window, she separated the curtains and peeked out.

The window faced the front of the house. Late afternoon sunshine was diffused by billows of storm clouds. Wind blew the rain sideways. Lightning flickered across the branches of the cedars and pines, casting them in bleak colors of black and white. She could see the shiny-wet roof of her car, but no sign of anyone on the driveway or in the yard, no glint of a gun or sign of movement in the encroaching forest. Uneasily, she opened the bedroom door.

Someone was moving around below. Someone — or something.

Had she reset the alarm?

No. She hadn’t. And someone in the forest had a gun.

Downstairs, she heard a soft snuffling interrupted by repeated growls. Did Jasha have a dog? Or had someone who was not Jasha — someone crazy, someone Ted Kaczynski — shot him and walked into his house with some sort of ferocious animal?

She felt silly. Overly-dramatic. She was plain Ann Smith, administrative assistant and nerd. Nothing dramatic ever happened to her. Yet she tasted fear. Taking off her stiletto heels, she held one in each hand as she walked quietly down the corridor. She paused on the balcony.

She heard growling. Panting. She peeked over the rail.

A dog stood facing the fire. He was huge, with a black-and-silver coat that gleamed with red and gold in the flames. He was growling, a constant, low rumble of displeasure rising from deep in his chest.

Then the dog turned his head, and his pointed snout and white-fanged snarl sent her scurrying back against the wall.

It was a wolf. A wolf stood before the fire.

Her heart pounded so hard it thundered in her ears. Her face flushed with fury, and she sidled forward again. She slid along the rail, examining the great room from every angle.

Somehow the thing had broken into the house. His rumblings had subsided, but she knew he was dangerous. A killer. A predator.

She took a step back.

Return to my room. Lock the door. Call Jasha on his cell and warn him. Then call 911 so they could get animal services out here …

She stopped retreating and stared.

She squeezed her eyes shut. She opened them again.

I’m allergic to something. The new car smell … Jasha's soap … I have to be. Because I’m hallucinating.

He looked … longer. His muscular shoulders had lost hair, and his ears … his ears grew bare and rounded, and slid down the side of his head.

The wolf stood on its hind paws. Stood erect, like a man.

Her blood stirred. Her skin grew sensitive. The air in the house had grown thick and heated. She recognized the signs. That was Jasha. That … that thing was really Jasha.

The pelt retreated to the top of his head and became hair.

He was naked. Nude. Absolutely without covering of any kind.

And apparently she was the weirdest perv ever to walk the earth, for even in the midst of her madness, she found the sight of his bare, toned butt riveting. She wanted to shut her eyes against the sight, to take a deep breath and give herself a stern warning of the dangers she faced.

But she didn’t dare shut her eyes — as she inched down each step, she stared at the thing before the fire. And she certainly didn’t dare take a deep breath. She didn’t dare make a sound.

The transition was happening slowly, and once or twice, it — he — groaned as if the growth and change of his bones pained him. The paws became hands, large hands with Jasha's long fingers, and he used those fingers to push back his hair in a gesture she recognized as exasperation and worry.

With each step down the stairs, her frozen disbelief became certainty … and fear. The man she adored … was a wolf. A beast. Something unholy, unnatural … and because she’d finally worked up the nerve to chase her dreams, she was stuck in the house with him. It. Jasha.

Her keys were on the end table by the door. If she could get from the stairs to her keys, she could open the door and race to her car ahead of him. She could drive off, and for once she wouldn’t care about the speed limit.

She would drive as if her life depended on escape — and it did.

Five steps from the bottom.

He hadn’t noticed her yet.

She’d run as far away as possible. She would never look back. Never. But first she had to get her keys. Open the door. Start her car …

She’d had this nightmare a million times. And like in the nightmare, the thing that would kill her lifted his head and sniffed. His head turned slowly in her direction. He looked at her.

Almost human. He was almost human. Except that deep in his dark blue eyes, a red glow burned. “Ann.” His deep voice sounded rough, as if he had a cold. He looked human again. Like Jasha, the man she loved.

He walked toward her. Naked. He was as glorious naked as she had always dreamed, and now she didn’t dare take the time to look.

“You little fool,” he said, “what are you doing here?”

She screamed and with all her might, she flung first one shoe, then the other, at him.

He dodged the first one. The second caught him squarely in the chest. The stiletto heel smacked his breastbone. She heard him grunt. Saw blood spurt.

She ran. Ran so hard she skidded into the door. She grabbed the keys. Her sweaty palms slid on the door knob. Any minute now and he’d have her.

She turned the knob. The heavy door swung toward her. The wind swept through the door, taking her breath. She ran onto the porch.

Behind her, she heard a growl. In terror, she glanced back — and saw it.

The transformation was reversing.

Inexorably, Jasha was becoming the wolf once more, and those red eyes were fixed on her.