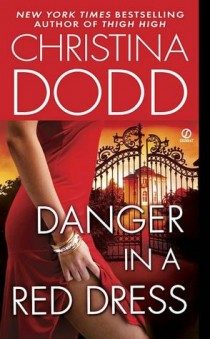 You can order DANGER IN A RED DRESS: Fortune Hunters #4, at these online retailers:

The thrilling conclusion of both The Fortune Hunters series and Lost Hearts series… told with all the excitement fabulous storyteller Christina Dodd can create!

Down on her luck and desperate for work, Hannah Grey finds herself caring for an eccentric, embittered elderly woman living in a mansion on the wild Maine coastline. On her deathbed, she entrusts Hannah with a dangerous secret she’s hidden for years—one that makes Hannah a target for killers and sentences her to a life on the run. Hannah needs to find the one man who can keep her alive…

Gabriel Prescott has searched for a place to call home his entire life. Now that he’s on the verge of finding out his family history, he discovers that there’s only one woman who dares to stand in his way. If that wasn’t unfortunate enough, the woman who threatens his search for truth may be the only woman who can save him…

(You met Gabriel Prescott in the Lost Hearts series!)

As soon as I came up with the idea for the Fortune Hunter series (TROUBLE IN HIGH HEELS, TONGUE IN CHIC, THIGH HIGH and DANGER IN A RED DRESS), I knew what the story for DANGER IN A RED DRESS would be. I wanted to wrap up the mystery of Nathan Manly and his stolen fortune with a family epic drama that included a gothic mansion on the wild Maine coast, a villain that slid farther and farther into wickedness, a long-anticipated hero (you originally met Gabriel in the Lost Texas Hearts series) and a heroine who starts out impoverished, downtrodden and star-crossed, and by the end of the book has become ... well. That would be telling.

Hannah sat in the small coffee shop, her hands wrapped around her warm cup of French Roast, stared at the screen of her laptop, and moaned softly.

Behind her, Sophia was cleaning the tables in the quiet neighborhood coffee shop. "Another rejection?" It wasn't so much a question as a statement.

"If I don't get a job pretty soon, I'm going to have to change my name, hitch-hike to New York, and become a musical star."

"You can't sing or dance." Sophia was the kid sister of Hannah's best high school friend, and she knew all too well how Hannah sounded with a karaoke machine.

Sophia glanced toward the counter and lowered her voice. "How about a cheese pierogi? We made extras this morning and Mr. Nowak has been bitching because you're here every morning, buy one cup of coffee without any add-ins, and use his free internet for two hours. Then you do it again in the afternoon. You know what a grump he is."

"So he's been listening to Jeff Dresser." Five months ago, she'd been gainfully employed as a home care nurse to old Mr. Donald Dresser. Then he'd died and left her fifty thousand dollars. His family had been enraged and indignant. Jeff Dresser had accused her of sexual misconduct —as if old Mr. Dresser could even perform — and they had sued to have her nursing certificate rescinded.

Now, even with frugal living, the legal bills to fight for her nursing certificate and the lack of income had reduced her fifty thousand dollars to twenty-two thousand. And with Jeff Dresser using his influence to slow the investigation of misconduct, she was going to have to do something besides the work she knew and loved. Retail, probably, which she'd done in high school, and hated.

Mr. Nowak looked up from his paper, his sharp, dark eyes fixed with hostile intent on Hannah. "Sophia, you keep cleaning. I'll do it."

She ordered, then waited patiently while he warmed the pierogi and fixed her coffee.

"Here's the pierogi," Mr. Nowak said. "I won't charge you for the coffee."

Then he smiled at her in that knowing way.

"I insist on paying." She pushed the cup back toward him, because she'd seen that smile before, more times in the last months than she wanted to remember, and on more men's faces that she could bear to think bout, and she was not giving this disgusting little troll of a man sex for a cup of coffee. Or for his free internet. Or for fifty thousand dollars, either.

His smile disappeared. "You come here every day—"

The door chimed as someone came in.

Mr. Nowak's voice swelled. "—When everyone in this town knows you are a slut."

Hannah stiffened in humiliation and anger.

He continued, "Everyone in this state knows you got money from poor old Mr. Dresser by --"

A strange man spoke beside her. "Is there a problem here?"

His gaze shifted to Sophia, then back to Hannah, then to the stranger. Hannah could almost see him thinking of the gossip if he brought charges, and he shriveled like a three-day old party balloon. "Go on. Take the food. Take the coffee. Get out and don't come back. You ... you ..."

"Wait." The stranger held up his hand. "If she was stealing from you, you should have her arrested. Shoplifting is a serious crime. But you can't just bandy that charge around. That's defamation of character. She could sue."

The last person to stand up for her had been old Mr. Dresser himself. Now, in astonishment, Hannah turned to look at the stranger.

He was a fine-looking piece of manflesh: over six foot, whipcord thin, broad shoulders, dark hair, distinctive green eyes, her age or a little older. And he dressed like a wealthy businessman, in a conservative black suit with a dull gold tie.

"She could sue, but she wouldn't win," Mr. Nowak blustered.

"You're a lawyer," Mr. Nowak disappeared into the back room.

Sophia whipped around the counter and washed her hands, smiling brightly all the time. "What can I get you, sir?"

"I'll have a medium Earl Grey tea, hot, with a splash of milk." He looked down at Hannah. "I know it's ridiculous, but I learned to drink it that way when I was a kid. If you sit with me, I promise not to crook my pinkie." And he smiled.

Hannah stood there, awe-struck by his straight, white, teeth, his long, black lashes, the dimple in his cheek.

He took the tea Sophia placed on the counter. "Let me pay for Miss ...?" He looked an inquiry at Hannah.

"Let me pay for Miss Grey's order, also. I don't want the manager to come back when I'm gone and make trouble."

At the same time, Hannah said, "I can pay for it."

"He's the owner? All the more reason." He turned to Hannah. "Miss Grey, my mother is from one of the founding families in Maine. She lives in a hundred-and-fifty-year-old mansion on the coast, and she's never left the twentieth century. She would kick my rear if I let a lady buy her own coffee. So please spare my mother -- she has arthritis and simply getting around is an effort."

With indecent eagerness, Sophia said, "Really? Arthritis? What a coincidence. Hannah is a home care nurse who specializes in arthritis cases. She's the best!"

Hannah knew she was right. An arthritis patient? In a different state where perhaps her infamy hadn't followed her? It wasn't legal, but Hannah couldn't afford to let this opportunity slip through her fingers. She looked right into his eyes and said, "If you should ever need help with your mother, I am the best, and I'm between cases."

"My mother won't hear of a nurse, but she's definitely getting to the point where I'm going to have to insist ..." He quirked an eyebrow, appealing to Hannah's understanding.

Hannah felt squeamish. She didn't lie well, not even lies of omission. Her nursing certificate had been suspended. She should tell him that, but if she didn't get a job soon ...

He sighed heavily. "One of us should be ashamed of ourselves."

She jumped. He already knew? "What? Who?"

"Me, of course. I'm leading you on." He shook his head as if disgusted by his own deception. "Mother has other problems, more serious than arthritis. She's diabetic, has a heart condition and she can't or won't control it or her weight. She's agoraphobic -- she hasn't stepped foot out of our house since my father walked out fifteen years ago. She's under investigation by the government, which has put a huge amount of pressure on her, and I'm afraid she's starting to crack. "

"My father is Nathan Manly." He spoke stoically.

"Oh." Everyone in New England knew the name and the disgrace attached to it. Fifteen years ago, Nathan Manly had destroyed his billion-dollar company, stolen the capital and fled to parts unknown, humiliating his wife and leaving his family without funds. His illegitimate sons (rumors claimed there were a dozen and the number climbed every time the story was told) were abandoned, too. Best of all, Nathan Manly and his money had never been found, lending the Manly scandal the status of legend.

"I knew I recognized you. From on TV!" Sophia almost leaped across the counter. "You're Carrick Manly!"

He smiled at her excitement. "Don't hold it against me," he said wryly.

"I would never do that." Sophia backed up and leaned against the wall, her knees wobbling.

In the years since Nathan Manly had fled to parts unknown, his son— this son, his legitimate son, his handsome, gifted and formerly wealthy son -- had assumed the status of a Greek tragedy.

"I'm still interested in the job." Hannah felt less guilty about keeping her own piddling little investigation quiet. "Perhaps we can make it work. Why don't we sit down and you can give me the details your mother's situation?"