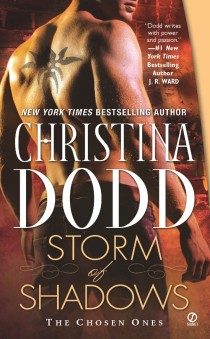 You can order STORM OF SHADOWS: Chosen Ones #2, at these online retailers:

STORM OF SHADOWS: Chosen Ones #2 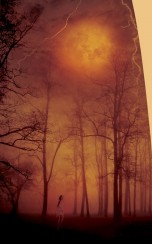 Brilliant but predictable and proper Rosamund Hall has lived her life buried in universities and libraries, discounting the legend of the Chosen as a myth.  Until Aaron Eagle shows up at her door. Aaron both unsettles and enthralls her. But she can’t resist his irresistible offers of clandestine visits to private museums, the hunt for a mysterious prophecy, or a makeover that unleashes her untamed soul. With the promise of a love that will defy fate itself, Rosamund is forced to confront the truth about the Chosen…and the man who sweeps her into a dangerous world of dark secrets.

The Chosen Ones … in paperback and ebook.
And original series, Darkness Chosen. Collect them all today!

In STORM OF SHADOWS, book two of the Chosen Ones, the new Chosen must fight for the good of mankind, everything depends on them, yet they’ve lost all their support and all their research materials — and because they’d dealing with an ancient legend and a fight between good and evil, they need as much help as they can get. So they turn to the traditional source of information: the library, and a slightly clumsy, completely clueless librarian named Rosamund Hall…

TODAY, IN THE BASEMENT OF THE LIBRARY

“Do you ever get gut feelings?” Aaron Eagle asked.

“When I get the flu.” Rosamund Hall laughed too long at her own joke, then grew uncomfortable under his steady regard. “My father said gut feelings were nothing but wistful thinking, and I might as well depend on a fortune teller’s crystal ball.”

“He wanted you to stay in the real world.” And why? When Aaron had come down to the library basement with antiquities that needed to be authenticated or manuscripts that required translation, Dr. Elijah Hall had been brilliant, stiff-necked, and grim, yet keenly interested in the paranormal. Most important in Aaron's mind was his sharp instinct for the genuine above the counterfeit.

Never, ever had he mentioned that he had a daughter.

Why had he so emphatically quashed Rosamund's curiosity?

Had Dr. Hall foreseen a dread prophecy for her?

“Are you familiar with the legend of the Chosen?” Aaron asked.

“The Chosen …” He could almost see Rosamund flipping through the encyclopedia of her mind. “Yes. The Chosen and the Others. When the world was young, a beautiful woman gave birth to twins, each marked as something set apart from average people. Repulsed, the woman took them into the darkest woods — in these fairy tales, it always is the darkest woods — and left the babies for the wild animals to devour.” She looked at him inquiringly. “Is that the legend you mean?”

Rosamund continued, “Those two children were the first Abandoned Ones, babies left by their parents without love or care and to compensate, given a gift of power. The babies survived. The girl was a seer. The boy was a fire-giver. They gathered others like them and formed two gangs, one for good and one for evil, and they fought for the hearts and souls of the Abandoned Ones.”

“A battle that goes on today,” he finished.

“Most have endings of some kind. The witch is tipped into the oven, the evil stepmother falls from a cliff —“ She caught sight of his face. “All right, not happy endings, but still, there’s none of that, The battle goes on today, stuff.”

“Yet it’s so much more realistic to know there can never be an end, or at least not until the” — he could scarcely stand to say the words — “until the moment when the devil conquers the world for evil.”

“If the legend of the Chosen Ones were true, which it’s not.”

Aaron wished that she was right. Unfortunately for her and her future peace of mind, she was staring right into the eyes of one of the seven Chosen Ones.