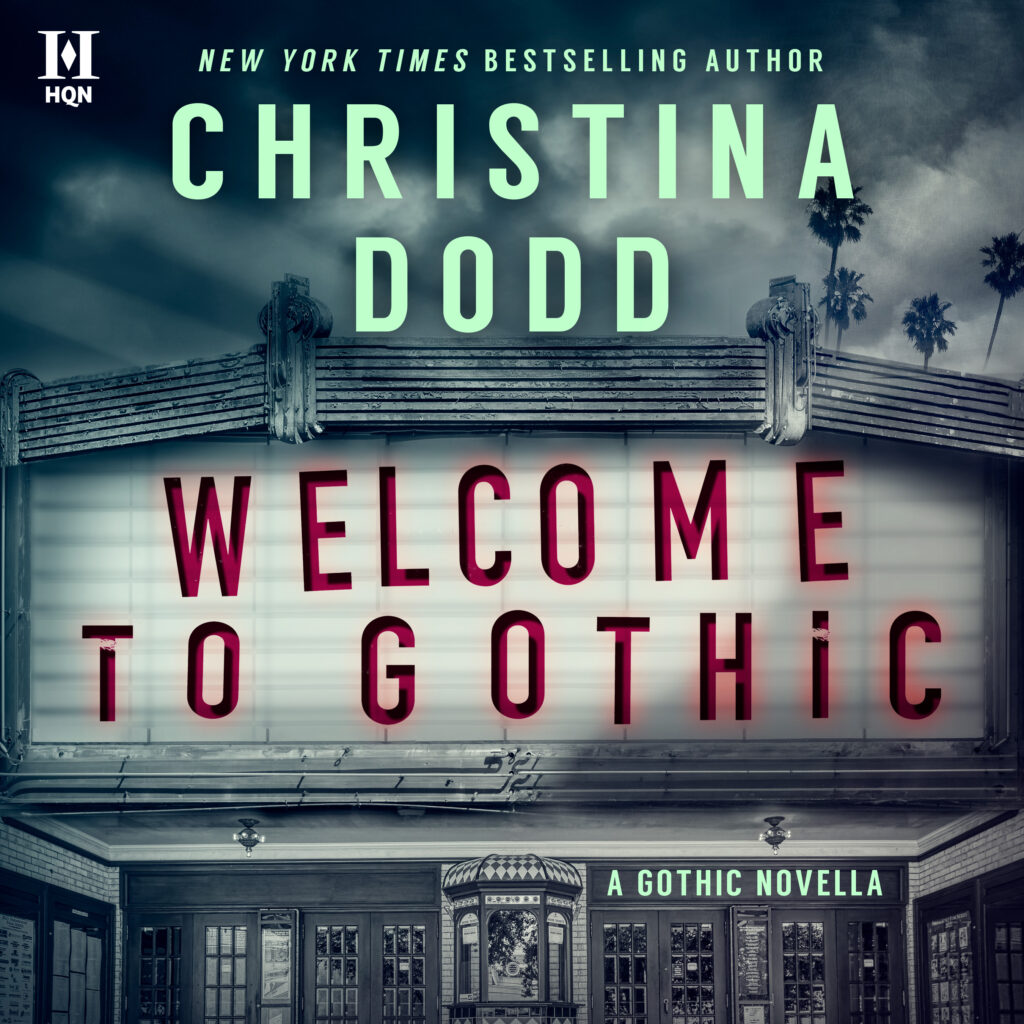 WELCOME TO THE PAST
At the glittering heart of Hollywood’s golden era in mysterious Gothic, California stands the regal Palace Theater—the pinnacle of thrilling shows, opulent décor, and the biggest stars of stage and screen. Here, drama unfolds on and off the stage.

WELCOME TO THE PRESENT
Today, in the abandoned backstage, fitness guru Wendy Giordano is knocked unconscious and wakes to find herself performing a daredevil stunt in the Gothic Palace Theater…in glamorous 1940.

On stormy nights, Gothic is said to disappear and on its return, it brings lost souls back from the dead. — The legend of Gothic California

Encore! owner Minnie O'Hall led Wendy to a locked door. “Go backstage and hunt for the props you need. Remember to be careful! In its day, before it was a movie theater, this place was Maeve Lindholm’s fully functioning playhouse. There are trapdoors and ropes and curtains everywhere.”

“Open the trunks and take whatever strikes your fancy. We’ll square it with you later.” Minnie pulled a big, old-fashioned iron key from her fanny pack, unlocked the door and opened it with a creak that would have done the Addams’s family proud. “Lock the door behind you. Tourists try to sneak in everywhere.” She handed Wendy the heavy key and gave her a push.

With a resounding thunk, Minnie shut the door, and for a moment, it reminded Wendy of a prison door closing…forever.

She looked up the dim, narrow stair into a swirl of dust lit by some unseen window or skylight. Or had the fog crept backstage in the theater…?

The air here at the bottom of the stairs seemed dense; it was hard for Wendy to catch her breath. The sensation of being trapped, shut in a dark closet, quickly grew. She needed to get out of here before something jumped out and shrieked, “Boo!”

Wendy fit the heavy key in the lock, turned it and locked herself in. Rather than bounding up the stairs in her usual style, she moved cautiously. Which, she assured herself, wasn’t because it felt as if she would confront some unhappy old theater ghosts, but because of Minnie’s warnings about trapdoors and curtains and props.

When she got to the top, the vista opened up to show her a backstage littered with boxes and trunks. It looked as if everything had been abandoned in a panic. Feather boas and wide women’s hats draped netting hung on hooks. She collected those, and the tear-away gathered skirt and bustier that made up some medieval costume. She forgot her trepidation; this seemed like a treasure hunt, and as she gathered each item it pricked her imagination.

She threaded her way through the dusty velvet curtains to the stage where, yes, theater ghosts lingered. She faced where that plywood wall separated the stage from the clothing shop. If the wall wasn’t there, if it was 1940, she would be facing the auditorium. Surely she should be able to hear the voices of the tourists in the clothing shop…but back here, it was so quiet she could hear the floor creak when she took a step. She’d lived in Gothic for six years, but never had she had a moment when she thought the local legend was true…until now.

Giving in to impulse, she caught up the cape draped across the trunk, flung it around her shoulders, faced the plywood wall and took a low bow. She faced stage left, and took another bow, stage right, and another. She could almost hear the roar of applause, which made her laugh at herself. Removing the cape, she wrinkled her nose at the musty smell and placed it in her bag.

The onstage steamer trunk called her name, figuratively, she assured herself, so she started there. It had been well-packed; the leather straps had been pulled through the buckles, tightly fastening the domed lid. She worked the leather free, flipped the metal clasps, and with an inhale of anticipation, she opened the lid.

She expected a flutter of moths or a funky smell, but instead it smelled like…the theater, a smell she knew well from her high school years. She’d been a stage manager, a stunt woman, and yes, a costume designer, and now she reached into the contents and pulled out a long, blond wig. “Wow,” she whispered. She shook it, no vermin fell out, so she placed it on her head and reached for the next piece, a skimpy leather skirt. She knotted it around her waist, took the companion piece, a leather halter, and tied it around her chest. She went to stand in front of the mirror; her dusty rose jumpsuit molded her shape and with the blond wig and the costume, she looked like some Hollywood producer’s idea of Tarzan’s Jane.

And she needed to stop fooling around and gather props. She should be able to get everything she needed out of that one trunk, and she headed back and leaned in. She didn’t take off the costume; she figured Minnie would get a laugh out of that…

She heard a whistling noise. Something heavy and hard struck her on the back of the head. The light changed. Stars swirled in a vortex.

She collapsed into the trunk and realized—oh, God, the trunk had been placed on top of a trapdoor. She fell. And fell. And never hit bottom.