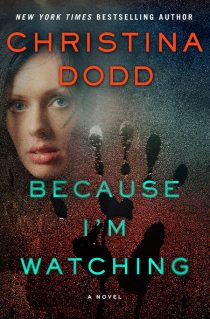 You can order BECAUSE I’M WATCHING: Virtue Falls, at these online retailers:

Veteran Jacob Denisov lives alone in his small, darkened home, sleepless, starving, blaming himself for the horrors of the past. When neighbor Madeline Hewitson drives her car through the front wall of his house, she breaks his house—and Jacob’s life—wide open. She isn’t called “Mad Maddie” for nothing. The survivor of a college dorm massacre, a woman accused of her lover’s murder, she is haunted by ghosts and tormented by a killer only she can see. Dealing with construction and forced to see the world outside his home, Jacob watches Maddie, recognizes a kindred spirit and wonders—is this truly madness, or has someone caught her in a twisted labyrinth of revenge and compassion, guilt and redemption, murder and madness?

FREE! Listen to the first chapter of BECAUSE I’M WATCHING!

Right-click on this link (and select “save link as”) to download the first chapter.

Jacob Denisov sat in his upright chair in his living room, staring into the dark. If he kept his eyes open and stared with precisely the right concentration, without movement or thought, the pain didn't break through. It took work, but for months now, he had practiced, and he had gotten pretty good.

No pain, slashing at his skull, trying to get out, to explode, to manifest itself in wild screams and violence that never stopped until he broke everything … especially himself…

No North Korea. No deaths. No fault. The world beyond the dark did not exist. He floated in bleak eternity and only the stench of guilt lingered, ceaseless…

He never knew when the sun rose or set; no light leaked through the black-out shades on the windows. He hadn't eaten since … he didn't remember. Yesterday sometime. He should go into the kitchen and get something out of the refrigerator. A piece of pizza. A sandwich. Whatever he had in there.

How long had it been since he'd had a grocery delivery?

He groped for the lamp on the end table, found the switch and turned it on. Even the pitiful amount of light the twenty-five watt bulb produced made him blink. When his vision cleared, he looked at the marks he had scratched on the wall.

Five days since the boy rang the doorbell, took the check Jacob taped on the window, and left two grocery bags of canned soup, prepared food, and milk.

That meant every bit of food in this house was stale or rotting, or needed a can opener, a clean pan, and the will and energy to prepare it for consumption.

Only two more days until he received groceries again.

He turned off the light.

At the camp, he had learned to wait for the right moment. He had learned… He pushed his spine hard against the chair, braced himself for the wave of pain—

And with a high screech of jagged wood against paint and metal, a gray Subaru Forester shot up the concrete steps of his front porch and exploded through the wall of his house, front wheels in the air, headed right for the stars.

Jacob blinked against the assault of sunshine while around him the house disintegrated. Brittle glass blew out of the old single-hung windows. Lathe and plaster from the walls and blasted into a dry, choking dust. Rock wool insulation dropped from the jutting ruptures in the ceiling.

The front of the small SUV slammed down hard onto the hardwood floor, ate the old TV, the decrepit wooden stand, and the low coffee table. With the roar of a revved-up engine, at last death had come for him.

He sat unmoving, waiting to be obliterated.

Then snap, boom! The left front tire from the small SUV broke through the hardwood floor. With a screech, the vehicle stopped abruptly … three feet from his knees.

He said the first unrehearsed words he had said in three months — "Oh, come on!" The car couldn't have driven another six feet and flattened him?

The engine slowed and idled, and died.

A hush fell over the surreal wreckage of his home.

The car sat tilted forward and to the side, with the left side of the bumper resting on the old braided rug. A painted, splintered stud from the front porch pierced the hood. The windshield was covered with wood shards and dust, but unbroken. A white airbag filled the driver's side of the car … slowly it deflated, revealing a woman in her twenties, wide-eyed and clutching the steering wheel.

She stared at him in horror and disbelief.

She had black hair tucked into a messy bun and wide, startled blue eyes. Her skin was the color of parchment. Blood trickled from her lower lip. She visibly struggled to pry her fingers off the steering wheel. Reaching down, she turned the key. The motor sputtered. She groped around and opened her door. The edge slammed into the splintered remains of the hardwood floor, leaving a gap of only inches.

She looked puzzled, then started the car again — the motor gasped and then, because she was damned lucky, it turned over. She rolled down the window.

Then oil blew past that painted stud like blood from an artery and the motor died.

She watched until the gusher dwindled, then she crawled out.

She was short, he realized, and thin. Too thin. Was he wrong in his assessment of her age? Was she a skinny adolescent, someone who had just learned to drive?

Then she scrambled to her feet and faced him, and he knew his first impression was right. She was in her mid-twenties, maybe a little older, dressed in a blue short sleeve t-shirt, yellow cropped sweatpants and one flip-flop. Damp brown stains splattered her shirt and sweatpants.

Made sense. If he'd driven his car into someone's house, he'd have brown stains in his sweatpants, too.

Somehow, since he'd moved to Virtue Falls, winter had turned to spring. A bright, sunshiny, contemptuous spring, glaring down on the concrete sidewalks, the narrow asphalt road, the neighborhood of cheap houses built in the 1920s; all appeared through the gaping hole in his living room wall.

He looked at her again.

Her. This person who had ripped off the fifteen-foot wide front wall of his house, exposing him, in his boxer shorts and t-shirt, to the sight of the world — and was apparently oblivious to her mistake.

She stuck out her hand. "Hi, I'm your neighbor, Maddie Hewitson."

He stared at her outstretched fingers.

"I live across the street."

He glared at her.

She smiled, winced when her lip split wider, and caught at the trickle of blood. "Ow!" She stared at the red on her fingers and looked confused, surprised to find herself here. At the sound of sirens, she glanced around, saw the neighbors gathering, peering in, and in a tone of despair said, "Oh, God. Not again."

Not again? "Do you make a habit of driving into people's houses?" His voice was rusty with disuse.

The way she said it, she didn't sound sure it would be her last.

The sirens were getting louder.

She stopped stammering out her feeble apology. She bent and scrutinized his face. Going back to the car, she wiggled through the window until only her feet stuck out, and hung almost upside down inside to get something off the passenger's side floor.

She hand-walked herself back out of the vehicle, returned to him and offered a brown to-go cardboard box, tied with a sparkly blue ribbon. A plastic fork was stuck into the bow.

"Go ahead," she said. "I bought it for my lunch, but you look like you need it worse than I do."

Nice ass or not, he was suddenly and completely sick and tired of her. Leaning his hands on the arms of the chair, he pushed himself to his feet.

She watched him rise, her eyes widening in alarm, and as if realizing he could be hostile, she stepped backward — toward the jagged hole her tire had ripped in his floor.

He caught her upper arm and half-lifted her to safety.

Three vehicles pulled up to the curb, lights flashing, two from the county sheriff's department and one from the Virtue Falls city police force. A deeper wail sounded from downtown, and a fire marshal and a fire truck arrived and parked by the hydrant.

Jacob's gaze shifted to Maddie's alarmed face, to the cops, and back to her. "You started a circus."

"I'm really sorry." She glanced toward his crotch and lowered her voice. "Do you think you ought to go put on some pants?"

He wanted to tell her he would, but only if she managed not to create another disaster. But he'd already said three sentences today.

He looked out at the law enforcement officers facing off on the sidewalk. City cops vs. the sheriff's department, fighting over what was probably the summer's most interesting mishap.

With all this going on, it seemed inevitable he would have to say more. Turning on his bare heel, he started across the kitchen's warped old linoleum floor.

"Be careful of the glass!" Maddie said. "Watch where you step; you don't want to have to go to the hospital."

He watched where he stepped.

As with about half the houses in the neighborhood, Jacob's one-bedroom shotgun house was stacked, room by room, on a narrow lot: the living room and the tiny kitchen in one big room. Then the bathroom, with a door into the kitchen and one into the bedroom. The bedroom faced onto the back porch which faced into a weedy, overgrown back yard which led to the alley.

He shuffled into the bathroom, and shut the door behind him. He used the toilet, washed the dust off his hands and face, stared into the mirror.

He looked like shit: pasty white, sunken eyes that looked like two pissholes in the snow, three months of dark hair curling wildly around his neck and ears, and five days of thick, black beard stubbling his chin. If his drill sergeant could see him now, he would feed him his balls on a shingle.

Jacob had a razor. He needed to shave his head.

He had a situation out there.

In the bedroom, he pulled on a worn pair of jeans and his athletic shoes with no socks, and headed back out to the scene of the crime. As soon as he opened the door, he flinched at the brilliant sunshine thundering into what remained of his sanctuary. Brilliant light, where before there had been deep, black, comforting darkness.

With one slow step after the other, he shuffled out of the bathroom. He shut the door firmly behind him.

He had come here to hide. To die.

God damn Maddie Hewitson. God damn her all to hell.