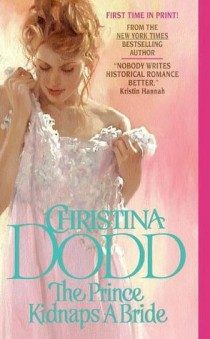 You can order THE PRINCE KIDNAPS A BRIDE: Lost Princesses #3, at these online retailers:

Christina Dodd brings you the final, great adventure in the Lost Princesses Series … and the grandest, most royal romance of all!

Betrothed in the cradle, Princess Sorcha and Prince Rainger were destined to rule their countries together. Then revolution swept the land, sending Sorcha to a remote Scottish island convent—and Rainger into a dungeon so deep rumor claimed he was dead. Now danger threatens, and Sorcha must travel home with a simple fisherman as her companion…a fisherman who is Prince Rangier in disguise. Changed from a careless lad to a dangerous man, he’s determined to win back his kingdom—and the woman he wants more than life itself.

But how can he protect Sorcha when she thinks every person she meets is her friend, every tavern is an opportunity to sing bawdy songs, and each turn in the road hides a new adventure? To keep his princess safe, he must resort to the most treacherous weapon a man can wield: seduction.