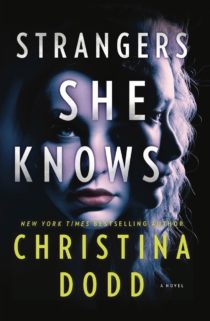 You can order STRANGERS SHE KNOWS: Cape Charade Suspense, at these online retailers:

I have three deadly problems:
1. I’ve seriously offended a maniacal killer.
2. I just had a bullet removed from my brain.
3. My new daughter is growing up too fast—and she’s in the line of fire.

Living on an obscure, technology-free island off California means safety from the murderer who hunts Kellen Adams and her new family.… Or does it? Family time becomes terror-time, and at last, alone, Kellen faces a killer playing a cruel game. Only one can survive, and Kellen knows who must win…and who must die.

An Amazon Best Book of the Month!
“Dodd at her brilliant best!” (starred ALA Booklist review)

FREE! Listen to Chapter 1 of STRANGERS SHE KNOWS!

Visit this link to enjoy the first chapter in the audiobook.

Rae Di Luca stacked up her Level Three lesson books, opened the piano bench and put them away. She got out the Adult Course Level 1A book, opened it to, “Silver Bells,” and put it on the music rack. “Mom, you have to practice.”

Kellen didn’t look up from her book. “Let me finish this chapter.”

“No, you have to practice now. You know it helps with your finger dexterity.”

When had their roles reversed, Kellen wondered? When had ten-year-old Rae become the sensible adult and Kellen become the balky child?

Oh yeah. When she had the brain surgery, her right hand refused to regain its former abilities, and the physical therapist suggested learning the piano. But there was a reason Kellen hadn’t learned to play the piano earlier in her life. She had no musical talent. That, added to the terrible atrophy that afflicted her fingers, made her lessons and practices an unsurpassed agony…for everyone.

She looked up, saw Rae standing, poised between coaxing and impatience, and the Rolodex in Kellen’s punctured, operated-on and much-abused brain clicked in:

Kellen loved this kid. The feeling was more than human. It was feral, too, and Kellen would do anything to protect Rae from threat—and had. “It’s so much more fun to listen to you play than practice myself. You’re good and I’m…awful.”

“Don’t talk to me about that dog. She howls every time I sit down at the piano. Sometimes she doesn’t even wait until I start playing. The traitor.” Kellen glared at the dog, and once again her brain—which had developed this ability after that shot to the head—sorted through the files of identity cards to read:

Luna watched Kellen in return, head resting on her paws, waiting for her chance to sing a solo protest to Kellen’s inept rendition of “Silver Bells.”

“Everybody’s a critic.” Rae set the timer. “Come on. Ten minutes of scales, then you only have to practice for thirty minutes.”

“Why do I have to practice ‘Silver Bells’? Christmas isn’t for seven months.”

“So you’ll have mastered it by the time the season rolls around.”

“We all used to like that song.” Rae took Kellen’s left hand and tugged. “Mom, come on. You know you feel better afterward.”

Kellen allowed herself to be brought to her feet. “I’m going to do something wild and crazy. I’m going to start learning ‘When the Saints Go Marching In.’ It’s the next song in the book, and I like it.”

“You can learn anything you want after you practice your scales and work on ‘Silver Bells’ for fifteen minutes.”

Kellen made her way through the ten minutes of scales—the dog remained quiescent for those—then began plunking out “Silver Bells.”

As she struggled with the same passage, her right hand fingers responding sporadically, the dog started with a slight whine that grew in intensity. At the first high howl, Kellen turned to the dog. “Look, this isn’t easy for me, either.”

Luna sat, head cocked, one ear up, one ear down, brown eyes pleading with her.

“I would love to stop,” Kellen told her, and turned back to the piano. “How about a different tune? Let’s try, ‘When the Saints Go Marching In.’”

She played the first few notes and out of the corners of her eyes, she saw the dog subside. Then, as she worked on tricky passage, made the same mistake, time after time, the dog sat up again, lifted her nose and howled in mourning for the slaughter of the song.

Rae giggled, and when her mother glowered, the child controlled herself. “Come on, Luna, I’ll take you outside.”

“She thinks she’s helping you,” Rae explained. “Come on, Luna!” She coaxed her dog out the door, turned back to Kellen and said sternly, “Twenty more minutes!”

“Yeah, yeah.” Kellen struggled on, trying to make her recalcitrant fingers do her bidding. Even when she finally got the notes right, it wasn’t a piano tune so much as jack-in-the-box music. When at last the timer went off, she slumped over the keyboard and stared at the fingers of her right hand.

Behind her, Max said, “Turn around and let me rub your hands.”

She noticed he did not say, That was good. Or even, That was better.

Kellen swiveled on the piano bench. Again that Rolodex in her brain clicked in:

MAX DI LUCA:
MALE, 38YO, 6’ 5”, 220LBS, ITALIAN-AMERICAN, FORMER FOOTBALL PLAYER. HANDSOME, TANNED, CURLY BLACK HAIR, BROWN EYES SURROUNDED BY LONG BLACK LASHES. ONCE HIGH UP IN THE DI LUCA FAMILY CORPORATION, STEPPED DOWN TO RAISE HIS DAUGHTER, NOW DIRECTOR OF THE FAMILY’S YEARNING SANDS RESORT ON THE WASHINGTON COAST. KIND, GENEROUS, RESPONSIBLE, LOVING. A STICKLER FOR DUTY. FAR TOO MUCH WILL POWER, WHICH WAS IRRITATING TO KELLEN IN MATTERS RELATING TO THEIR MARITAL STATE.

He took her right hand gently in both of his and, starting at the wrist, he massaged her palm, her thumb, her fingers. He used a lavender-scented oil, and stretched and worked the muscles and bones while she moaned with pleasure.

He listened with a slight smile, and when she looked into his face, she realized his lips looked fuller, he had a dark flush over his cheekbones, and his nostrils flared as he breathed. She leaned close and whispered, “Max, I’m done with practice. Why don’t we wander up to our bedroom and I’ll rub your…hand, too.”

He met her eyes. He stopped his massage. Except for the rise and fall of his chest, he was frozen in that pose of incipient passion.

Then he sat back and sighed. “Doctor says no.”

“Woman, if I could be careful, I would. As it is, nothing is best.”

“I am torn between being flattered and frustrated.” She thought about it. “Mostly frustrated.”

“I’m just fine.” Max didn’t usually resort to sarcasm, so that told her a lot. Married almost two years and no sex. He was coming to the end of his patience.

“If we’re refraining because we’re worried I’m going to pop a blood vessel while in the throes of passion, I’d like to point out there are solutions that you might enjoy.”

“Not the same.” Again he took her tired hand and went to work.

He laughed. “It’s improving all the time.” When he had made her hand relax and Kellen relax with it, he said, “I’ve been thinking—the Di Luca family owns Isla Paraíso off the coast of Northern California. The family bought the island seventy years ago with the idea of placing a resort on the island, but now that doesn’t seem likely. Someone needs to go there, look things over, make decisions about its fate.”

Kellen nodded. “You want to go there? See what you think?”

“Actually, I thought we should all go there.”

He was still working her hand, but with a little too much forcefulness and concentration.

He pulled away, horrified. “Did I hurt you?”

“Not at all. But you’re not telling me what’s really going on. Why do you want to go to this island?”

“I don’t doubt that what you told me is the truth. But it’s not all the truth. Max, what’s wrong?”

Max sighed, an understatement of a sigh. “You’re not going to like it.”

“What about him? He’s dead.” She remembered she couldn’t always trust Kellen’s Brain. “Isn’t he?”

“Yes. He was buried in the Cape Charade cemetery.”

“Was buried?” Unease stirred in her belly.

“This week, his widow arrived from Wyoming.”

“No.” Max was as sure as Kellen was not. “Yet the woman who claimed to be his widow had all the necessary paperwork to have his body exhumed.”

“She had the coffin placed in the chapel. Last night, the undertaker, Arthur Earthman, found her there, with the coffin open. She murdered him, and almost killed his wife, Cynthia. The widow escaped ahead of the sheriff, and she left her calling card.”

Kellen knew. She knew what Max was going to say. “She cut off Mitch’s hands.”

“And took them.” Max looked up at her, his brown eyes wretched with fear. “Mara Philippi is back. And she’s here.”