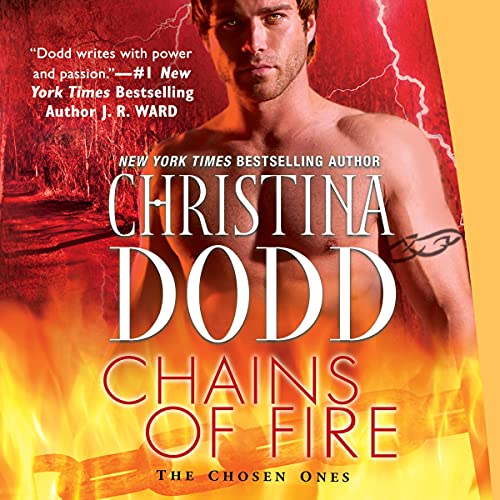 Samuel Faa is a Gypsy lawyer with the power to control minds. Isabelle Mason is wealthy, privileged, and refined, and has the gift for healing. Two of the Chosen Ones, they share a past filled with love and betrayal, and a future denied by fate—until the day they’re trapped underground. No way out. No way to deny the passion that still burns beneath the surface. When danger threatens, Isabelle has only one choice: to place her trust in the power of the one man she could never forgive…or forget.

CHAINS OF FIRE is the fourth book in the Chosen Ones series, the story of Isabelle and Samuel, two Chosen with a past they carefully hide…

SWITZERLAND IN THE DEAD OF WINTER

Chilled, sleepy and exhausted, Isabelle fastened her seat belt, huddled into her coat, leaned her head back, closed her eyes and let herself drift. The road was winding, swaying her back and forth as Samuel drove its length, taking her back to her mother’s house. Although it was three in the morning, she knew her mother would be awake, ostensibly supervising the clean-up, while in reality, she’d be waiting … for Isabelle to return with Samuel. Isabelle had had so much experience with this situation, she knew everything that would happen.

Patricia would look them over, her eyes sharp, silently demanding an explanation.

Isabelle would give her one. Mother, we had a job to do.

Patricia wouldn’t like that. But once she ascertained that they betrayed no undue fondness for each other, showed no signs of love-making, she would invite Samuel to stay the night, and assign him a room so far away from Isabelle's he might as well be in Italy.

Isabelle smiled painfully. As if that would matter to Samuel. If she gave him the slightest encouragement, he would swim Lake Geneva and scale the Matterhorn to reach her. To sleep with her. To shake her world.

She turned her head to gaze at his warrior’s profile, his chin shadowy with stubble, his dark gaze fixed intently to the road. God, how she loved him. Most of the time, she could dismiss the knowledge that for as long as they both lived, she would love only him. But when she was tired, when her guard was down…

No. No matter how much her body yearned, she wasn’t going to give into him again. She wouldn’t allow him to destroy her once more.

The tires skidded on the pavement. The vehicle slipped toward the edge of the road.

She straightened in her seat. Moonlight sprawled over the vast snowy expanse of meadow that stretched to the right, over the dark silhouette of the medieval castle turned ski lodge snuggled against the sleek groomed slopes of the mountain, over the lifts and trams, over the empty parking lot waiting for tomorrow’s influx of skiers. The narrow ribbon of road before them was shiny-slick with ice. On their left, the land fell away and only a snowdrift stopped them from falling into the dark precipice.

They were moving too fast, taking too many chances in these conditions — and for all that Samuel loved speed, she had never felt endangered by his carelessness. “Samuel? What’s wrong?”

“Sh.” He didn’t lift his gaze from the road, but something about the way he held himself made her look again across the meadow and above.

The mountains rose abruptly toward the deep black velvet sky, blocking the stars, challenging the moon. In the daytime, their beauty lifted Isabelle's heart. Right now, she remembered how cruel they could be… “Samuel, what’s wrong?”

He slammed on his brakes, skidding again. Yet he corrected so expertly the car slid around sideways, slowed. Then he accelerated around the next corner.

In the headlights, she saw evergreen branches spread across the road and a huge trunk in their midst. The wind had caught the ancient evergreen and blown it over. Except … the stump was cut. The tree had been deliberately used to block the road.

Samuel eased the car to a halt.

Now she knew why he acted so out of character. Somehow, he’d caught the scent of danger. This was a trap.

With a low curse, he put the vehicle in reverse, flung his arm over her seat, and with his body arched and his gaze fixed behind them, he backed up as fast as he could. At the driveway leading to the ski lodge, he slammed on the brakes, then accelerated into the parking lot. In a low, terse voice he said, “Emergency kit is behind my seat. Get it. Jump out as I stop.” He put the car into a skid and they skated sideways toward the lodge.

With a swift economy of movement, she unsnapped her seatbelt and climbed between the seats. She grabbed the black nylon bag, heavy with gear, and as the vehicle slid up over the curb and eased toward the ski lodge, she unlocked her door. As soon as they settled to a stop, she was out.

They ran toward the ski lodge.

Her heels sank into the snow, and snow sifted through into her strappy sandals. High above, she heard a deep, menacing boom. She jerked her head toward the mountain and saw the snow lift off the slope like a cashmere blanket being fluffed by a giant hand. She stood transfixed as it settled back, slid toward them, gathering speed as it moved… She prided herself on her cool good sense. She was known for her serenity. But she screamed now. “Samuel! Avalanche!”

He leaned over, slammed his shoulder into her gut, lifted her and ran.

She gasped, the air knocked out of her, draped over him like a sandbag.

She’d never heard Samuel sound like that before, but she recognized desperation when she heard it. She heard the rumbling, too, and as Samuel slammed against the building, she heard another one of those deep, menacing booms far above.

He set her on her feet.

The ground beneath her shook as the massive wall of snow thundered toward them.

The ancient castle’s wall rose four stories above them. On the second and third floors, windows had been cut into the stone to give the skiers a view of the Alps. But here on the ground floor, security reigned supreme. One narrow window. A single heavy metal door.

He tried the lever handle, said, “Locked,” and stepped back to allow her access.

She handed him the bag, pulled a long, stiff, platinum diamond pin out of her hair. Kneeling beside the door, she inserted it in the lock. Her unflagging calm made her the best lock pick in the Chosen. Yet never had she worked under such conditions, with the lock, the pin, and the whole world trembling as death roared toward them.

Samuel flipped on the flashlight and aimed it at the window. “Glass is reinforced with mesh,” he said. “Need the light?”

“Please. No.” The moonlight provided a clear, even illumination. The flashlight’s narrow beam would simply distract her.

The roll of the avalanche grew to a bellow.

Samuel stood immobile beside her, ostensibly calm. Yet she could feel him straining, desperate to grab her and run. She found the mechanism with the tip of her pin. Lifted. Manipulated. Heard the lock click. She opened the door.

Samuel snared her around the waist, lifted her like a child and dashed into the dim interior, lit by a pale nightlight and the moonlight shining through the window. They stood on a metal landing with stairs going up to the main floor of the lodge and down to the basement. Samuel vaulted down the first five steps.

She caught a glimpse of the lodge’s locker room.

The avalanche hit like a nuclear explosion. The window shattered. Moonlight disappeared. The electricity went out. Snow blew in with the force of a tornado, ripping at Isabelle's skin.

The stairs shook like a bucking horse. Samuel struggled to stay on his feet.

The metal cracked. The steps disappeared out. And they fell … into nothingness.