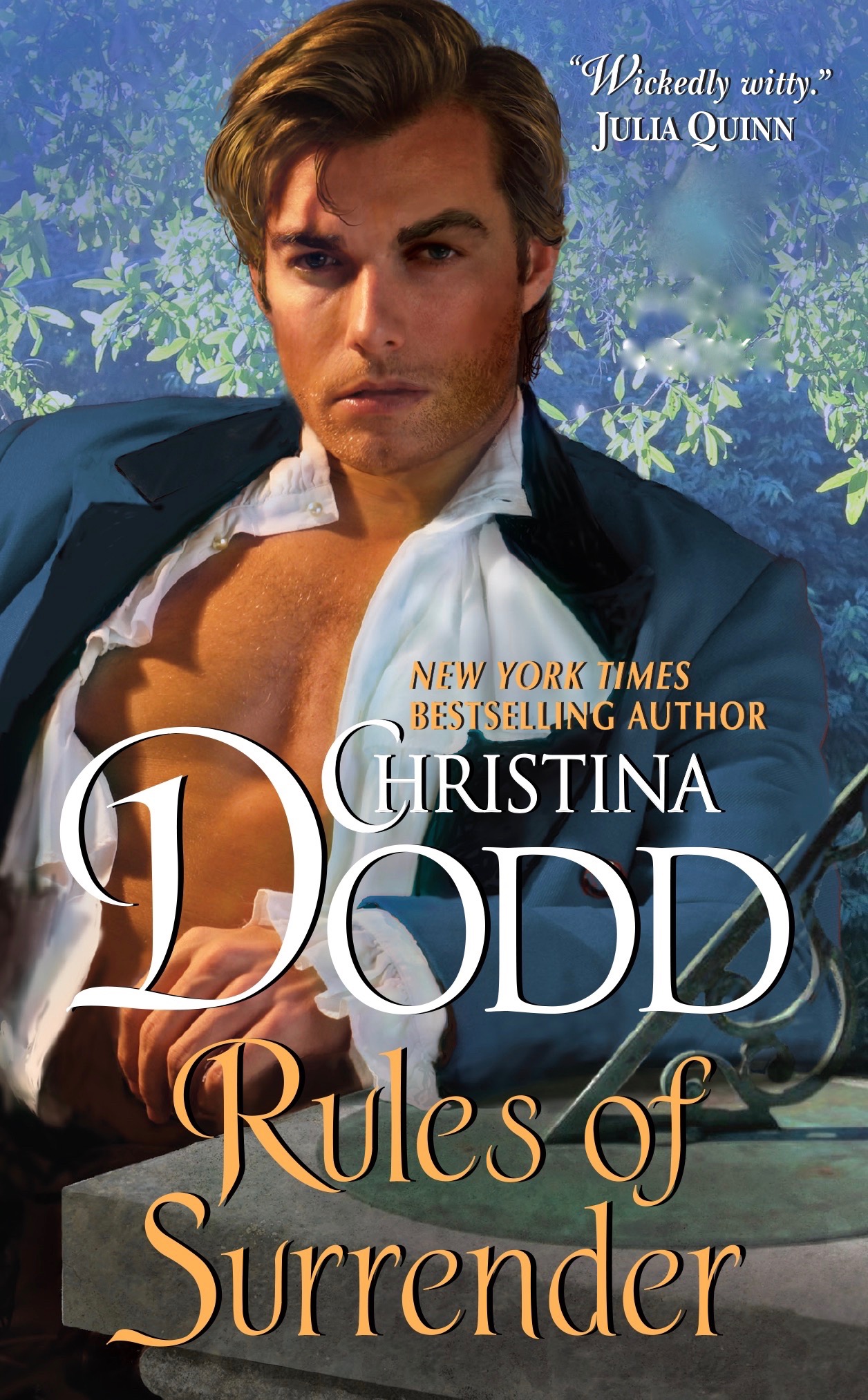 You can order RULES OF SURRENDER: Governess Brides #2, at these online retailers:

The Rules of Employment for The Distinguished Academy of Governesses: Always remember your station. Be sure to maintain a disciplined schoolroom. And never become too familiar with the master of the house…

Lady Charlotte Dalrumple is known as England’s most proper governess, a woman who has never taken a misstep socially—or romantically. On the surface, she seems suited to the challenge of reforming Lord Wynter Ruskin, sadly uncivilized by his travels abroad.

But Wynter has no desire to be taught manners. He glimpsed an uninhibited beauty hiding beneath Charlotte’s prim exterior, and he’d much rather spend his days—and nights—instructing her in the pleasures of the body and the passions of the heart. But before they can love both must also master the Rules of Surrender.

Listen to an excerpt in audio:

RULES OF SURRENDER is my first Victorian historical in the highly acclaimed series called The Governess Brides and a romance in the tradition of The Sheik and Anna and the King.

Lady Charlotte Dalrumple, Miss Pamela Lockhart,
and Miss Hannah Setterington
Invite you to visit
The Distinguished Academy of Governesses
Offering the finest in governesses, companions
and instructors to fill any need
Serving fashionable society since March 1, 1839

"I thought your son was dead," Charlotte blurted. Charlotte never spoke without thinking, and that aberration alone should have warned her of the impact Wynter would have on her life. But she was blissfully oblivious as Adorna descended from the carriage.

Adorna mounted the shallow steps and enfolded Wynter in her arms. "Dear boy, what have you done now?"

He leaned down to give her a warm buss on the cheek. In an accent so faint and foreign Charlotte had to strain to hear it, he said, "I simply told the men that they should keep their women under tighter rein."

"Wynter, how could you say such a thing in Mrs. Morden's presence? She fancies herself above reproach, and the Mordens are rich and high-placed enough that she may think whatever she likes."

He reflected. "Actually, it was Lady Howard who took the greatest offense. A viperous woman who flirted with me in front of her man."

"Ladies are not sequestered here," Adorna said. "Flirtation is allowed."

"Is it proper?" he demanded.

Adorna tilted her head as she considered the intricacies of English society and how to explain them to her son. "Not when one party is married, but —"

"What but can there be? If it's not proper, it's improper." He turned to Charlotte as she gathered her carpetbag and descended from the carriage with Skeet's assistance. "What do you think?"

Charlotte thought any man who went barefoot, wore his hair like a woman and couldn't manage to button his shirt all the way to the top should not be passing judgment on others, but her ingrained manners would not allow her to say so. "It's not what I think or you think that matters. What matters is the hospitable treatment of guests."

"Yes. In the desert, if a guest is not treated hospitably, the sand and the sun bleaches his bones." He looked past her as if seeing the shifting dunes and blazing sun. Then Wynter's attention snapped back to the present. He moved away from the top step of the portico to allow Charlotte to ascend. She stepped foot on the veranda, and as smoothly as some great-maned predator, Wynter closed in behind her and proceeded to circle, examining her with the open curiosity he might show a zoo animal.

She did not lower herself to do the same, but neither did she turn her eyes away in a pretense of cowardice. Nothing intimidated Charlotte; the sooner he learned that fact, the less conflict they would endure.

He had grown tall in his sojourn away from England; he topped her by more than a foot. His bulk filled her gaze, but she kept her vision properly affixed to his countenance.

He might have been a geometry proof, for angles of every kind made up his face. His forehead was a handsome rectangle, his cheeks jutted out from the point of his chin, his nose was a sharp, beaked triangle. A long scar tugged at the edge of one eye and bisected his right cheek. His brown eyes, she noted, no longer contrasted with his fair complexion. The sun in El Bahar had tanned him to the color of toast, and lightened his hair in streaks. He still sported those unusually dark eyelashes and brows, but he no longer allowed them to droop in Byronesque brooding. He looked at the world with such direct and avid interest some lesser beings might find themselves discomfited.

"Mother, does she fulfill all our requirements?" He directed his question to Adorna, acting as if Charlotte were either deaf or invisible.

Nobles did behave so to their servants, of course, but governesses lurked in that ill-defined domain of neither servant nor aristocrat. Charlotte, especially, as a doyen of deportment, tended to be treated with respect. But Wynter was obviously oblivious to the niceties. Charlotte would be offended — was offended — except she wanted to hear the answer.

"She's young and pretty." Wynter's years in the desert had stripped him of artifice.

His children, Charlotte thought, were not the only barbarians. Her fingers tightened around the handle of her bag and she put a crisp edge to her voice. "Youth and prettiness are not a barrier to efficiency."

His insolence brought a rush of blood to Charlotte's cheeks. And for no reason, she assured herself. In every new employment, she had been initially disdained by someone. But to have this man, this brute, so openly doubt her … ah, that put her teeth on edge.

"Miss Dalrumple," Adorna said, "may I present my son, Wynter, Viscount Ruskin. Wynter, this is Lady Charlotte Dalrumple, the governess for … or rather, an expert in manners."

Determined to behave as if the personal comments, the cross-conversation, the insolent inspection were quite normal, Charlotte curtsied. "I am delighted to make your acquaintance, my lord."

Lord Wynter just gazed at her rather stupidly. "What should I do?" he asked, apparently to the thin air.

Acting on reflex, she placed the bag on the floor beside her. "You bow, and repeat, 'I am delighted to make your acquaintance, Miss Dalrumple.’"

"I see." He bowed, a sweep of courtesy. "I should bow like this? And I should say" — he took her hand and bent over it, then looked into her eyes — "I am delighted to make your acquaintance, Miss Dalrumple."

At that moment, she realized he made a game of her. He knew exactly what he should do, but with obnoxiously feigned ignorance he had been testing her.

She didn't like the man. She didn't like him at all, but if he were similar to the other fathers she had truck with, she would never see him past this initial meeting.

Only he looked at her as if she were a person who now merited his full attention. The gaze that before had been analytical now searched her as if he wished to know her in some intimate manner. And when he brought her hand to his cheek and smoothed it across the skin, she thought she knew exactly the manner he sought.

The slight growth of his beard caught at the cotton of her glove. She knew her eyes had grown wide. She tugged at her hand, and when Wynter released her, she said, "If you would allow me, my lord, to offer a critique of your conduct?"

He straightened, still watching her. "Of course."

"I believe I may have pinpointed the reason for Lady Howard's flirtatious manner. That gesture of hand to cheek is quite unusual in English society. She may have read into it interest on your part. Perhaps it would be best if you dispensed with any but those gestures which you have observed in others until you once again regain your sense of propriety."

He tucked his hands behind his back and straightened his shoulders. "Actually, I believe my sense of propriety is alive and well."

Now she looked at him, seeing him as others would; a swaggering, powerful, experienced man of the world. The kind of man who made English noblemen appear bloodless and superficial. A threat to the very thread of English society. "But it is not British."

"You think the British have defined propriety."

Perhaps it was more than patriotism that made her agree. Perhaps it was the desire to snub this vulgarian. But she denied that even as she said, "Certainly. In your situation, where you have been gone for many years, to be a paragon of British propriety would prove a social advantage."

Wynter laughed, a whole-hearted bellow of amusement. "You are lovely, oh moon of my delight. Without you, my life has been as barren and cold as the night desert when the harmatan blows with its endless, sorrowful breath."