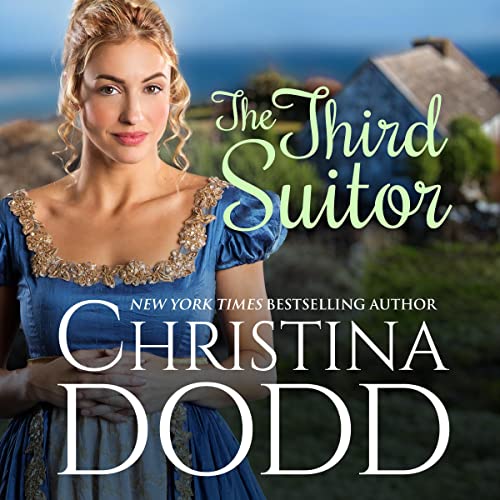 When Harry Chamberlain (first met in Lost in Your Arms: Governess Brides), plays the gentleman and helps Jessie Macmillien avoid her hapless suitors, they both find much more than they bargained for: laughter, passion and love…

THE THIRD SUITOR is part of the HERO COME BACK novella collection, available in eBook.

Wildbriar Inn on the coast of Dorset, England
September, 1847

The girl flinched, stopped crawling through the collection of moss, dirt and faded pink blossoms, and turned a smudged face up to his. “Sh.” She glanced behind her, as if someone were creeping after her. “I’m trying to avoid one of my suitors.”

“There’s not a soul in sight.” A smart man would have let her go on her way. Harry was on holiday, a holiday he desperately needed. Now a girl of perhaps eighteen years, dressed in a modish blue flowered gown, came crawling through the bushes, armed with nothing more than a ridiculous tale, and he was tempted to help. Tempted because of a thin, tanned face, a kissable mouth, a crooked blue bonnet and, from this angle, the finest pair of breasts he’d ever had the good fortune to gaze upon.

Such unruliness in his own character surprised him. He was the owner of a great estate in Somerset, and because of the weight of his responsibilities there, and he did his duty without capriciousness. It was that trait which had set him, eight years ago, to serve England in various countries and capacities. Now he gazed at a female intent on some silliness and discovered in himself the urge to find out more about her.

“Thank you!” A smile transformed that quivering mouth into one that was naturally merry, with soft, peach lips and a dimple. “Because I thought that’s what you were doing.”

Harry nodded. His cottage afforded him a lovely view of the white sand beach where waves rolled in eternally, soothingly. The piercing cry of terns could be heard as they dove for smelt, and a breeze carried the scent of brine and freshness. He wanted to sink back into the porch swing, to stretch his shoulder where the bullet had torn through muscles and bone, and wonder what next he would do with his life.

Instead he looked down. The girl was still there, struggling to unhook her bonnet from one of the stiff branches. “Take it off,” he recommended.

“Good God,” he whispered. In an instant, the fall of hair transformed her from a frightened English girl to a kneeling houri. Obviously, he’d spent too much time among the sheiks of the East if he were imagining erotic tableaux here in the heart of sunny Dorset. And obviously, he’d spent too much time alone if he lusted after such a hoyden. When he got back to civilization, away from this backwater inn with its charming guest cottages and its windswept cliffs, he would have to do something about his condition. Take a mistress, perhaps. Or accede to his mother’s wishes and take a wife. Or both.

The girl picked up the bonnet and stared at it. “Miss Hendrika will be most unhappy about this.”

He didn't want to ask, but the habits of a lifetime were too strong. “Who is Miss Hendrika?”

“Where is Miss Hendrika?”

“She’s at the inn, finishing her breakfast.”

“Ah.” The inn stood behind the cottage at the very top of the hill overlooking the beach. “Aren’t chaperons supposed to … chaperone?”

“She’s old and a little dotty, and truth to tell, I think my stepmother told her not to bother chaperoning me too closely in hopes one of the suitors would compromise me.”

That frank speech settled it. This girl lifted the malaise which had plagued him since he’d been shot. Although he was not dressed to receive guests, Harry descended the steps and reached into the shrubbery, offering his hand. “Come up on the porch and explain.”

“So I noticed.” She crawled out and stood, brushing at the dirt caked on her knees and once again affording Harry a lovely view of her bosom. “But Lord Jenour-Redmond will certainly see me if I remain there.”

“Dreadful.” He watched with appreciation as she rose to her full height.

He would have to be careful with this girl.

She was perhaps a little older than he’d first suspected. “You’re twenty-two.”

She paused in the act of peeling off her soiled gloves. “Yes! How did you know? Most people think I’m younger.”

The gap between eighteen and thirty — his own age — was insurmountable. The gap between twenty-two and thirty was not so large, and made him feel less like an elderly leech leering at an innocent child’s breasts. Thank heavens, for he couldn’t stop leering. “There is a touch of experience about you that no eighteen-year-old gently bred girl would have.”

Her narrow chin set and lifted, and indignation sounded clearly in her voice. “Sometimes they try and kiss me, but I don’t like it.”

“Let’s sit.” Taking her hand, he assisted her up the steps and seated her on the wide swing. “Your suitors try to kiss you?” Smart men.

“Other men, too, but it’s the suitors who seem to think they must try.” She wiggled her nose as if that amply expressed her opinion, then expressed one anyway. “I’ll tell you frankly, kissing is not as agreeable as the romantical novels make it out be.”

“For one thing, any reasonable looking man immediately becomes overly-large at that distance, and one may view every fault.”

“You’re supposed to close your eyes,” Harry informed her gently.

“There’s a good idea.” Sarcasm dripped from her tone. “He’s already got me in a clinch, he’s pressing his lips to mine, and I’m to close my eyes so I can’t see what other tortures he has in store? Perish the thought.”

“Obviously, you’ve been kissed by bunglers. Someone needs to kiss you correctly.” Ignoring her startled intake of breath, Harry called his valet. “Dehaan, would you bring a glass of lemonade for my guest?”

“A guest? You have a guest?” Dehaan’s Dutch accent thickened with excitement, and he stuck his head out the door. In a tone of awe, he said, “It’s a woman.”