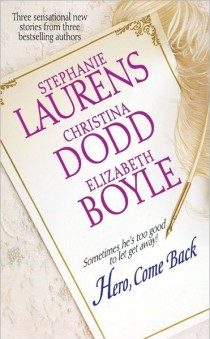 You can order HERO COME BACK: Governess Brides Novella, at these online retailers:

Bestselling author Christina Dodd brings you, “The Third Suitor,” a novella of The Governess Brides…

Hoyden heiress Lady Jessie Macmillian must choose a husband from among three suitors, but a surprise awaits her … and Harry Chamberlain, the gentleman-spy who falls into the web of tangled courtships.

(You’ll recognize Harry from LOST IN YOUR ARMS.)