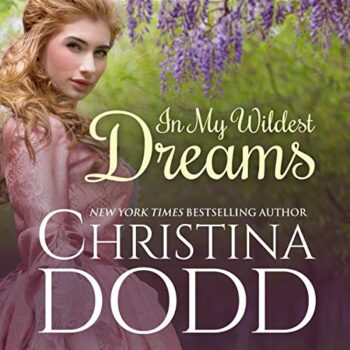 In My Wildest Dreams

Since she was a little girl, Celeste has had one burning desire: to marry rich, handsome Ellery Throckmorton. The education she receives at the Distinguished Academy of Governesses gives Celeste a refinement that complements her ravishing beauty, and makes her bold romantic dream more attainable. But, alas, temptation gets in the way…

For wherever Celeste turns, it is not Ellery she encounters, but his intriguing older brother Garrick. She cannot disregard the fluttering of her heart whenever Garrick deigns to smile at her. And the passion she senses smoldering beneath his formidable control tempts her in a manner a lady must never allow…

IN MY WILDEST DREAMS is book four of the Governess Brides and sets off in a new direction when Adora (introduced in THAT SCANDALOUS EVENING and possibly the most beloved character I ever created) buys the Distinguished Academy of Governesses and takes a hand in the lives of the young women as they go out to seek their fortunes. IN MY WILDEST DREAMS is also my homage to Sabrina, that famous and charming Cinderella story. I mixed it with a dash of James Bond for possibly my best-selling and most popular historical.

“Milford,” he said, “it has come to my attention that your daughter is moping.”

Adorna pressed her fan to her lips to conceal her amusement. The sun shone into the old walled garden, displaying Throckmorton's lack of expression, his absolute stillness, giving proof to the popular theory that Throckmorton the younger was nothing but a calm, bloodless, self-serving merchant.

Adorna wasn’t so sure. Sometimes when she glanced at Garrick Stanley Breckinridge Throckmorton, she suspected she saw … more.

Milford, the head gardener of Blythe Hall and a dignified East Anglian yeoman of at least fifty years, turned his hat in his work-roughened hands. Apparently he was used to such direct speaking, for he neither flinched nor cowered. “Celeste is young, Mr. Throckmorton, only seventeen years. Given time and the right man, she’ll settle.”

“Yes.” Seated on one of the wicker seats he had brought back from India six years ago, Throckmorton appeared unconvinced. “Perhaps.”

Of course, Throckmorton wasn’t handsome like his brother Ellery. He could never have been, for where Ellery’s blonde, blue-eyed allure oozed from every pore, Garrick was plain, dark and somber. Tall, but all Throckmortons were tall. Big-boned and strongly-muscled, betraying the common origins of the Throckmorton family. So conservative in dress and manner Adorna wished occasionally to shake him until he betrayed some real emotion. The guarded gray eyes assessed events and weighed characters without revealing anything of himself, and to Adorna such caution seemed out of place in a twenty-seven year old man — unless he concealed depths within his soul.

He gestured to Adorna, her arm draped across the back of the love seat in a graceful curve. “This is Lady Bucknell, the proprietress of the well-respected Distinguished Academy of Governesses in London. Lady Bucknell has expressed an interest in having Celeste return with her to the Distinguished Academy of Governesses in London and there be trained as an instructor.”

Adorna smiled at Milford. He didn’t melt, as most men did, at the application of her charm, but watched her steadily, weighing her with his gaze. The head gardener at Blythe Hall was an important personage, after all. He had to be a man of good sense.

“With all due respect, my lady — why Celeste?” he asked.

“Celeste would be an admirable governess. Children follow her about, and she is endlessly patient. She’s well-spoken and well-educated, thanks to the Throckmorton family, I believe —“

Milford nodded. “Grateful, I am.”

“She seems responsible, but aimless, with no goal in sight.” That was a lie. Celeste had a goal, and that goal was the love of Ellery Throckmorton. She followed Ellery about, speaking to him when she had the chance, spying on him from ill-concealed hideouts.

Indeed — Adorna's glance flicked to the wall behind Throckmorton — young Celeste seemed to have developed a penchant for spying.

Ellery never noticed Celeste was alive. Oh, he knew her name, but not that she’d grown from a knobby girl into a handsome young woman. Adorna planned to remove Celeste before Ellery did notice, and thoughtlessly took what was offered.

Opening her fan, Adorna moved it slowly before her face. The branches on the willow that grew beside the wall were swaying, yet no breeze ruffled any of the other trees. Pitching her voice a little louder than her normal, husky tone, she said, “Celeste speaks French well, I believe.”

“Our cook,” Throckmorton supplied. “A master of sauces, and a way with fish that has never been matched. Even after six years, we miss her.”

Milford’s dignity grew to combat the dangerous weakness the mention of his wife invoked. “Aye, sir.”

“At any rate, Milford,” Adorna said, “a woman with Celeste's gifts will make an admirable addition to the Distinguished Academy of Governesses.”

Eyes narrowed, Throckmorton glanced behind him. Rising, he strolled around to lean against a low-hanging branch.

“Most girls are at seventeen.” Adorna mused that Celeste would, with a little coaching, add luster to the reputation of the Distinguished Academy of Governesses. “When I am done with Celeste,” Adorna said, “she will be polished, independent, and a force to be reckoned with.”

Throckmorton gave him a small nod, reassuring the anxious father.

Milford sighed heavily and displayed the wisdom that allowed him to take charge of dozens of undergardeners and acres of flowers with such success. “Very well. I’ll miss her sore, but if she stays, she’s going to get in trouble. So, my lady, take her.”

Eyebrows lowered in a fierce and violent fury, Throckmorton shook the tree.

The girl, Celeste, tumbled downwards in a silent confusion of faded skirts and lop-sided blonde braids.

Throckmorton caught at her, breaking her fall.

But she landed hard in the flowerbed, mashing columbine and yellow alyssum. Her petticoats flew up to reveal black woolen stockings tied with a string around the knee. She gasped painfully as her breath left her.

So he hadn’t known who was up there, Adorna realized, only that someone was spying on them, and he had reacted with rage and determination. Fascinating. Milford didn’t appear surprised to see his daughter. He only shook his head mournfully. “Scatter-brain.”

Celeste looked up at Throckmorton and with all the passion of her youthful fury, she said, “I won’t go. I won’t be polished, and independent, and a force to be reckoned with. You can’t make me.”