Christina Dodd Discusses The Nuts And Bolts Of Writing Sex 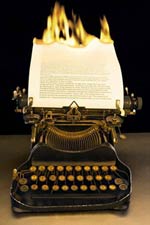 THE NUTS AND BOLTS OF WRITING SEX. Heh, heh. See?  You already know the first difficulty in writing a sex scene. When you’re writing sex, the chances that you’re going to say something inadvertently funny are huge. Every time I write a sentence like, He slid his woody into her hoo-haw, I realize a lot of words and combinations of words are out.

A lot of words for body parts are crude — just ask any guy what he calls his penis and without drawing a breath, he’ll come up with a dozen different terms. Ask a woman what she calls her body parts and she’ll faint or stammer or mumble. Think about it. Write a love scene from a man’s point of view, and the scene can be blunter, more direct, more physical, more concerned with how the body parts react and how they fit together. Write a love scene from a woman’s point of view, and it must be softer, more romantic, with sweet scents and faint moans — and we can never, ever use the word “probe” because it reminds all women of the gynecologist.

I take a rich, powerful man who wants one woman and one woman only — forever. And I give him a heroine who is everything I would like to be.

Then I give those people a conflict that is impossible to overcome.

Those characters are the two most important elements of a great sex scene. Without two people who are irresistibly drawn to each other, yet can never be together, there’s no sexual tension, and without sexual tension — who cares if they get together?

Once I’ve got sexual tension, it’s not a question of how soon should I write the sex scene. It’s how do I keep them out of bed?

In TONGUE IN CHIC, I wrote Romeo and Juliet as played by Dharma and Greg. Meadow and Devlin’s families have been feuding for centuries. She’s the daughter of hippie artists. He’s the son of Southern aristocrats. When he catches her breaking into his house, she falls and hits her head, then tells him she can’t remember why she’s there because she has amnesia. So he says, “Darling, I know you don’t remember, but you’re my wife.”

I’ve got two people lying to each other. They each know the other is lying. Neither one knows the other’s ulterior motives. But the reader knows — Meadow desperately needs to steal something of great value from Devlin, and Devlin wants to use Meadow for revenge against … well, never mind, I’ve already said too much. So there’s no way these two can possibly get together, and at the same time, he gives her the stability she needs while she rescues a serious, dangerous man from the darkness that threatens to envelope him. They’re made for each other. They can’t have each other.

So now what? Preplanned or spontaneous? Where? Long or short? (Scenes — geeze.) And what’s the point of all this thrashing around?

When I started TONGUE IN CHIC, I had a good synopsis and the book was blocked out, which means I had a pretty good idea where the sex scenes would be. But good sex is like, um, good sex. Sometimes it’s planned and sometimes it’s spontaneous, like when Meadow seized the moment and I was typing, His purple-headed love warrior met her clinging velvet tunnel, and thinking, “Wow, I didn’t intend this!” Over the years what I’ve learned that if I’m in the mood to write a love scene, to seize the moment and write love scenes out of sequence.

I always use the setting of the book — in TONGUE IN CHIC, Devlin is developing an old Southern mansion into a boutique hotel (think HGTV.) Think big storage closets. Attics! Stairways! And — original thought — there are beds in hotels. Lots of them. Not to mention extensive gardens. Meadow loves to dance naked in the moonlight. What do you think is going to happen?

I write long scenes to build desire slowly. With Meadow and Devlin, and with most of my heroes and heroines, they need 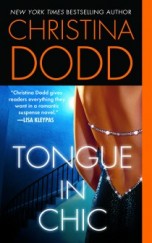 those long moments to explore each other. My main goal for the reader is to share in their wonder at each first touch and each indrawn breath, to make the reader feel and breathe with them. It’s that sense of first-time magic I want to impart.

I write short scenes that are so intense they burn as quickly as flash fire — for me, those usually come later in the book, and usually are fueled by great emotions — fear that they’re going to die or anger at each other or an imminent and permanent separation.

The things Meadow and Devlin say or don’t say during the sex scenes reveals so much about them — the love they feel for each other, the reasons they’re afraid to admit it, even to themselves, and the dark depths hidden in their souls. I work to build into their scenes all their desperation and yearning because, after all, sex is love made tangible.

What single book have you read that has the best love scenes? The ones that made you fan yourself or wake up your bedmate or go out and buy every single one of an author’s backlist? (You might also enjoy this article on My Funniest Mistakes.)