In this newsletter:
— DEAD GIRL RUNNING into your eager hands!
— A Pinterest Board for You!
— Thursday, April 26th at 7pm! My first ever Canadian autographing!

Not the whole refrigerator, just the fan, and we have to wait a week for the repair parts so we have packed it full of blue ice and have a small fan directed at the non-functioning fan to keep the air moving inside. Could be worse. At least it’s not the condenser! At least we don’t have company!

Ahem. And it’s a beautiful day here (at last) in NW Washington, so I’m celebrating with a DEAD GIRL RUNNING except for you.

Winter, Yearning Sands Resort, Washington coast
The darkness was growing…
Kellen woke. She was still in her clothes in the chair beside the bed, tense, sweaty, cold and cramped beneath the patterned throw.
The darkness was not growing. In fact, the room’s automatic nightlight provided enough illumination to see the outlines of the furniture and walls. She stretched her stiff muscles. In the daytime, the window looked away from the resort and the cottages and toward the dock and the Pacific Ocean. Now, on this rainy, moonless night, she saw nothing. Nothing.
Then one single bright light shone in the dark. A flashlight? A lantern?
It blinked off.
She blinked, too. Was that the remnant of a nightmare?
No, someone was out there. Lost? Alone? Looking for the body they had lost? She flipped off the nightlight and moved through utter darkness toward the window.
The light out there came on again and swung it in a circle on the ground, then up in the air.
Kellen stepped back to avoid being spotted. Ridiculous, but automatic.
She glanced at the time. One forty-five am. Whoever it was either wasn’t afraid of being seen, or wanted to be seen. Or their meeting hadn’t occurred as they expected and they were desperate. Or…or she didn’t know.
She did know the rain rattled against the window and today they’d found a decomposing body out on the flats. Had someone found another one?
The light flashed around again. Kellen watched, willing it to go out permanently, and when that didn’t happen, she cursed as only an Army officer could curse, got her Glock and strapped it into her shoulder holster, pulled her rain gear on over her clothes, and headed out.
As soon as she stepped foot on the porch, the wind caught her breath and whipped it away. Sleet blew beneath the overhang and stung her face. Maybe she should pretend she hadn’t seen anything… But no. Yearning Sands Resort was her responsibility. Holding the handrail, she groped her way down the stairs.
A man’s voice behind her said, “Don’t do this.”
Not a moment of hesitation. She whipped around in the turning kick Mara had been teaching. She should have struck his throat. She slipped and landed a strike on his hip. She kicked again, aiming high.
He blocked.
She landed a solid strike against his arm.
She attacked.
He parried.
She landed good hits, but somehow she never did enough damage to hurt him. She felt as if she was being toyed with by an expert.
No. No one was going to lead her anywhere she didn’t want to go. She leaped back, out of his reach. She hoped. She pulled her Glock, released the safety, pointed and asked, “Who are you?” 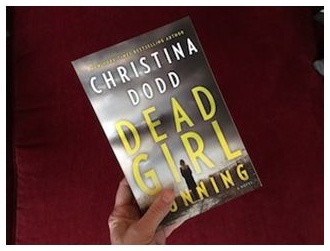 Make it as simple as holding it in your hand…or fancy with flowers and a vase.

Take a selfie (this is me without makeup…don’t look too closely) or take a photo with your dear old dog or cat or fish. (As you can see, Ritter is thrilled to help me promote another book.)

I’d love to see your photo of DEAD GIRL RUNNING. Feel free to pin on the Pinterest board and put it up on Instagram, Twitter, Facebook. Wherever. Let your friends know what you’re reading!

My first autographing in Poulsbo at Liberty Bay Books was fabulous. Janet from my newsletter came (hi, Janet!) and fed me questions about the treehouse and other fun stuff. Donna from my newsletter and her lovely daughters came, too (hi, Donna!) It’s always such a privilege to meet you in person! If you live in the Pacific Northwest or are planning a vacation, remember, Poulsbo is gorgeous and quaint, Liberty Bay Books is one of the best bookstores ever, and they now have autographed copies of DEAD GIRL RUNNING and all the Virtue Falls series. Do stop by, grab your book and say hello for me! One terrible thing did happen — the USPS messed up and didn’t deliver the DEAD GIRL RUNNING cookies on time. But they arrived on Monday, so do stop by, grab your book, a bookmark and a cookie and say hello for me!

As you know, I can see Canada from my front door, yet this is my first Canadian autographing — ever! I’m thrilled to go up meet readers and to visit Vancouver, a fascinating, diverse city I love. Yes, there will be DEAD GIRL RUNNING cookies! And bookmarks! Come to the autographing, we’ll chat, you can ask questions, and I’ll sign your new copy of DEAD GIRL RUNNING.

Finally, here’s an interview question and my answer:

As every guest and employee becomes a suspect, how does Kellen remain sane amid the chaos?

What I tried to incorporate into Kellan’s personality is a sense of what every woman would feel/think/experience when facing similar crises: abuse, homelessness, love, war, murder, deception. Do you crumple when the world is against you, or do you rise to the challenges and become a better you?

To write a character that speaks to many readers, I have to try to walk in Kellan’s shoes and bring the reader with me. It’s a case of one mind/one heart, which is why I feel such a bond with my readers; they think like me and like my characters. They feel my emotions and the emotions of my characters.

You can read the rest of the interview here.

“I’ve had a few arguments with people, but I never carry a grudge. You know why? Because while you’re carrying a grudge, they’re out dancing.” — Buddy Hackett