I did *not* get arrested!

First, let me assure you I’m a law-abiding citizen. I don’t jaywalk, trespass or speed (much.) I don’t swear—

Okay. I don’t swear in public. I don’t drink and drive. I’ve been married since the earth’s crust cooled, so living in sin is out. I put money in the parking meter, and I don’t litter.

But in my defense, that statue was in the courtyard of a brand-new Seattle building with no occupants and we thought—Jayne Ann Krentz and I—that it would be okay to use the statue as a prop for two quick book videos, one for her (SWEETWATER AND THE WITCH, written as Jayne Castle, out this week!) and one for me (POINT LAST SEEN which is, as you know, available now.)

Let me tell you.

I filmed and Jayne’s video was perfect. I mean, of course. She’s even more law-abiding than I am. See her SWEETWATER AND THE WITCH video on her website. (10 seconds) 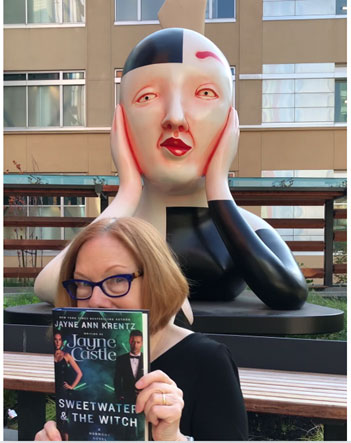 Then we were stuck trying to figure out something interesting and different for me. We walked around the statue, studied it from every angle, discussed the fact the bench was too high to sit on and what were the designers thinking? Me, being the 30 watt bulb in the 100 watt box, suggested that I climb up on the high bench, crawl toward my book, pick it up, show it, and say my line.

Now. If you visit Nerdville, you’d find that Jayne Ann Krentz and I are so nerdy we’re Nobility. Do you know what outrageous thing I did for Senior Sneak? I skipped school, stayed home and read all day. And was perfectly happy!

Yet despite our mutual law-abiding nerdiness, Jayne agreed that me climbing and crawling would make a great video. Enthusiastically agreed, might I add. Never once did she say, “This seems illegal/unwise.” Nor did I think it. We cackled about her taking video of me struggling to climb up on the elevated bench and she suggested I could really show off my physical fitness that way. In the end, I completed my video without a hitch.

What was actually happening was apparently the building wasn’t as empty as we thought. Apparently there was a security guard watching and as soon as I got up on my perch, he charged out of the building yelling, “That’s not a bench.” (That’s not what the word sounds like on the video, but Jayne assures me he wasn’t calling me names. ) I was so intent on crawling and picking up POINT LAST SEEN to show to the camera and reciting my line I didn’t realize what was happening until I was done. I hopped down. We found out it wasn’t a bench but a table-like place to stand with your coffee or your lunch. I mean, obviously. I apologized. We skedaddled out of there.

See the POINT LAST SEEN video on my website. 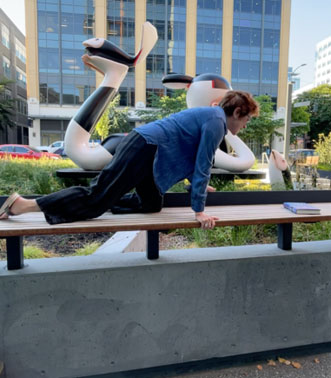 Jayne compared us to Lucy and Ethel. My daughter, when she got done laughing, called us Bonnie and Clyde. I don’t even want to talk about Thelma and Louise. If I count the times I’ve been yelled at by a security guard, including this time, it would be…one.

If you’ve never embarrassed yourself in public, have you ever really lived?

If you haven’t already, I hope this adventure convinces you to order SWEETWATER AND THE WITCH by Jayne Castle aka Jayne Ann Krentz, and POINT LAST SEEN by Moi. You can recommend the books, write a review, and share this letter. Because we live to entertain you, and the Nobility of Nerdville are now Rebels of Readerville!

As long as, you know, going forward being Rebels involves nothing illegal or dangerous or unwise or results in us being yelled at. 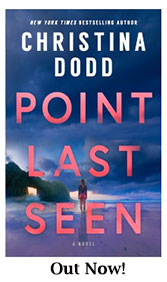 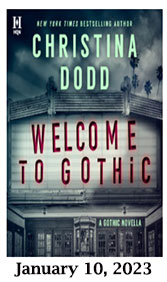 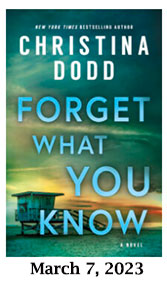 My doctor asked if we suffered madness in our family. I replied we all seemed to enjoy it.