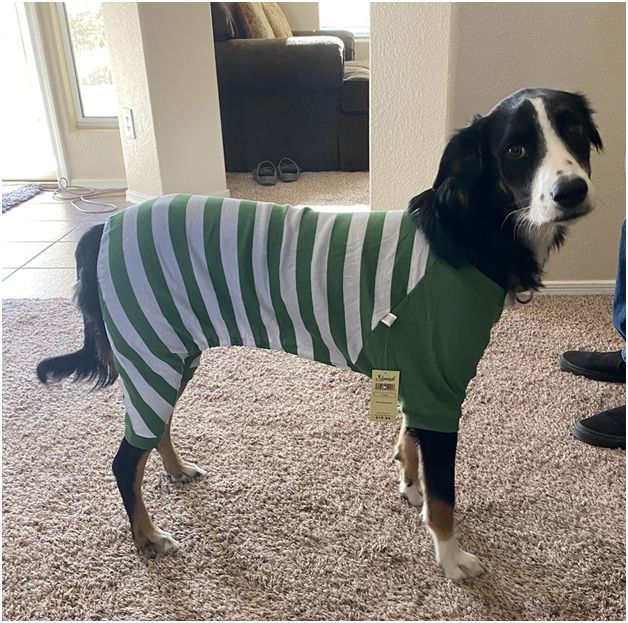 When life is grimmest, humor shines bright, and I’m always on the lookout for some funny true stories to make you laugh. This time, when my younger daughter sent a photo of her dog in his Christmas pajamas, I remembered that a picture is worth 1000 words.

Rocky looks so patient! And indignant! And he’s so skinny he gets cold unless he’s wearing his pjs, so you know after the first shock of being dressed, he’s ultimately happy.

Here’s a short WRONG ALIBI excerpt to make you laugh even more:

“This isn’t a Disneyland version of the wilderness. This is the Alaskan wilderness.” Petie stood in front of the massive fireplace, speaking to the eighteen men and women who sat on the lodge’s couches and chairs, and to Hawley, sprawled in his oversized recliner in the back. “Do you know what a bear thinks when it comes across a camper in a sleeping bag?”
The new fisherfolk shook their heads.
“Mmm, a taco.”
Laughter.
The seasoned fisherfolk, the ones who had come with Jeen Lee in previous years, smiled wisely. They knew what was coming.
Petie asked, “What does a bear think when it comes across a camper with pepper spray in a sleeping bag?”
Heads shaking.
“Mmm, a spicy taco.”

Where in heaven’s name did I get those bear jokes??? 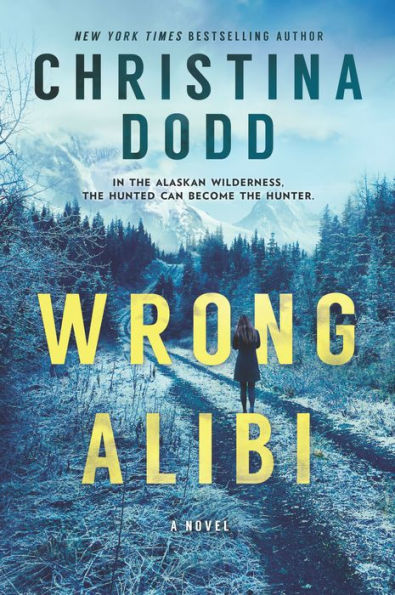 From my clever, supportive Alaskan readers. When I was writing WRONG ALIBI, I asked for help on Facebook and they came to the rescue. Thanks to them for providing bear humor for the book.

As we get closer to the WRONG ALIBI publication, I’m more and more excited for you to read Petie’s story because…

Okay, WRONG ALIBI is in E! But I wrote the book, so don’t crush my pretensions.

E! recommended WRONG ALIBI as one of their books to read in December:

If Lisa Jewell, Ruth Ware and Lucy Foley are on your Mount Rushmore of suspense writers, Dodd’s latest release definitely needs a spot on your shelf. After she is framed for murder by her former boss, 18-year-old Evie Jones flees before she can be convicted and assumes a new identity. But when she discovers the man who ruined her life has resurfaced in Alaska, Evie comes out of hiding to seek justice before she’s found with blood on her hands—again. (Dec. 29) — E! 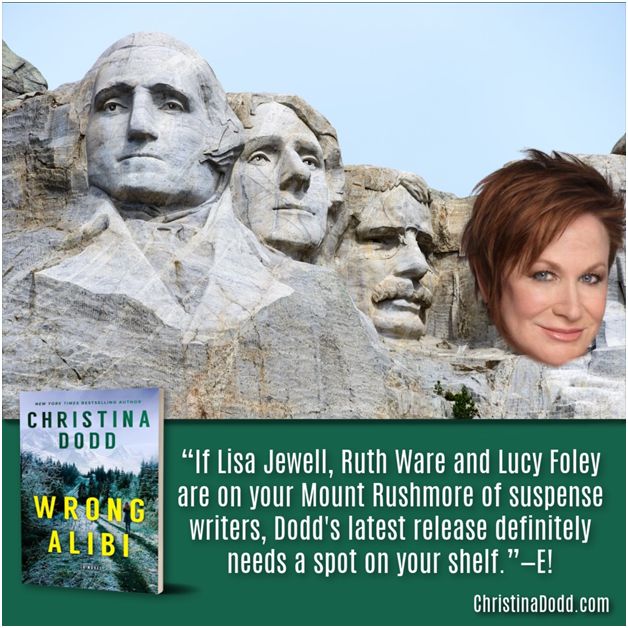 Finally…Hanukkah is wrapping up, Christmas is in a week, and The Husband and I are ready to celebrate the holidays within our own tiny bubble. For us, Christmas officially began when we went across the road, down the hill into our forest, cut down our tree, dragged it up the hill, up the driveway, measured it, realized it was too tall, cut some off the base and the top, carried it up the steps into the house (as always, there was a lot of up involved) and now it’s residing in our living room, looking scraggly and catawampus like a douglas fir that grew in a natural setting. (Read: Christina Dodd Drags the Christmas Tree…Uphill.) And you know what? Like Charlie Brown’s tree, with decorations and lights and a lot of love, it will be beautiful.

Whatever holiday you celebrate, lots of love to you, too.

Christina Dodd Yells HEY! UNTO YOU A CHILD IS BORN!

One last thing, I swear — on Facebook, I asked what songs you sang wrong as a kid. My favorite responses:

“The 4 year old daughter of a friend went with us to a children’s concert at church. Her dad played drums in a rock band. She got really excited when the narrator announced Joy to the World was next. The children began singing and she belted out, ‘They’re singing it wrong! It’s supposed to go Jeremiah was a bullfrog.’”

“Daughter (age 6) came home from school and was pretty mad at me. Kids had been singing Christmas carols and she happily belted out, ‘Walking in my winter underwear…’”

Have the merriest Christmas! 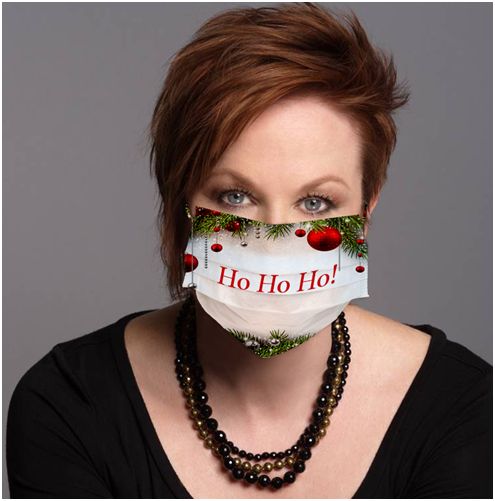