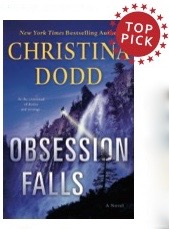 Christina Dodd mixes a chilling cocktail of suspense and romance in Obsession Falls (St. Martin’s, $26.99, 400 pages, ISBN 9781250028471). While trying to save a young kidnapped boy from death, Taylor Summers finds her pleasant day in the Sawtooth Mountains turning into a prolonged feat of wilderness survival. When she re-emerges into civilization, the authorities not only think her dead, but believe that she was involved in the kidnapping. Taking on a new identity only brings danger as she witnesses even more violent wrongdoings. After being forced to go on the run again, she lands in the town of Virtue Falls and begins to rebuild her life under the name Summer Leigh. But that doesn’t keep menace at bay—or the two enigmatic men who find her so very fascinating. With enthralling characters and an intriguing and imaginative premise, this is a spooky, nerve-stretching read that is sure to please Dodd’s many fans.