BECAUSE I’M WATCHING Amazon Best of 2016!

BECAUSE I’M WATCHING hit Amazon’s List of Best Romance of 2016! This is my first time to make the list 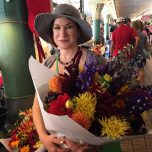 with any of my books, and I’m honored to be in the company of such great authors…and I’m so happy for Jacob and Mad Maddie, Kateri and all of the fabulous Virtue Falls characters! Most of all, thank you for your support and enthusiasm. BECAUSE I’M WATCHING is a word of mouth book—my readers tell other readers who tell other readers, and I am honored and grateful. Thank you! So far BECAUSE I’M WATCHING has received: 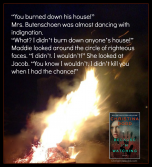 — A Barnes and Noble Review titled, “Just Try to Put Down Christina Dodd’s BECAUSE I’M WATCHING: We Dare You,”

— An RT Reviews Top Pick: “Virtue Falls has seen its fair share of the evil that can live in the hearts of some individuals, but it has also seen the triumphant spirit of others.…From the opening page (of BECAUSE I’M WATCHING), Dodd reels readers into this eerie and darkly suspenseful tale that will remain with them long after they finish the book. A creepy classic.”

Suspense Magazine said, “This incredible author offers up many twists and turns which will sound something like an Alfred Hitchcock narrative, as the two main characters are caught up in a world of oddities, creepiness and revenge. This is the third book in the Virtue Falls series and, if possible, the best yet!”

Wow. Just … wow. View the cover and the shimmer on this brief video! Order the fabulous hardcover from Amazon, Katy Books, Books-A-Million, IndieBound, Barnes & Noble, at your favorite bookstore, or in eBook: Kindle, Nook, GooglePlay, Apple Books and Kobo. Want an autographed copy? These bookstores ship!  And don’t forget you can download and listen to the first audio chapter!